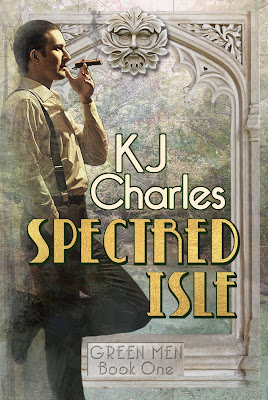 Archaeologist Saul Lazenby has been all but unemployable since his disgrace during the War. Now he scrapes a living working for a rich eccentric who believes in magic. Saul knows it’s a lot of nonsense...except that he begins to find himself in increasingly strange and frightening situations. And at every turn he runs into the sardonic, mysterious Randolph Glyde.

Randolph is the last of an ancient line of arcanists, commanding deep secrets and extraordinary powers as he struggles to fulfil his family duties in a war-torn world. He knows there's something odd going on with the haunted-looking man who keeps turning up in all the wrong places. The only question for Randolph is whether Saul is victim or villain.

Saul hasn’t trusted anyone in a long time. But as the supernatural threat grows, along with the desire between them, he’ll need to believe in evasive, enraging, devastatingly attractive Randolph. Because he may be the only man who can save Saul’s life—or his soul.

London 1923. Saul Lazenby, disgraced archaeologist, is reduced to working for Major Peabody, a crank who believes in magic. Saul first bumps into a mysterious man when a tree spontaneously combusts in a park. Now he and his employer are off on a train to investigate...

They sat in a six-person compartment, in the usual configuration of two facing benches. It was empty except for themselves, but as the whistle screeched and steam billowed, the door opened, and a man sprang in.
“Good day, gentlemen,” he said, slamming the door and removing his hat. “I beg pardon for intruding.”
“Not at all,” cried Major Peabody as the train set off. “It is, after all, public transport; I trust my colleague and I won’t disturb you with too much talk. Good day to you.”
The man sat down opposite Saul, took up his newspaper, looked over it, and smiled. It was a sly, charming, insincere smile and it was worn by the man from the burning tree.
Saul was sure of it. He’d paid enough attention at the time, he’d had that sardonic, highly bred face and voice in his mind for hours after, and here he was, the man who’d been at the Southcott tree, as they set off to see the Southcott box.
It was the kind of coincidence that would delight the Major’s heart, and Saul wasn’t sure he could bear it. He could imagine the saturnine man’s sneer as the Major spouted mystical nonsense, and for all his fussy employer exasperated him Saul didn’t wish to see him mocked, any more than he wished to be known as a lunatic’s jack-of-all-work.
The man was still looking over his newspaper at Saul, and as their eyes met, he tilted a brow in unmistakable question.
God. It couldn’t be—
No, of course it wasn’t an approach. Surely that was just Saul’s own wishful thinking. Although there had been that Like what you see?...
No. And even if it was, Saul had no intention of entertaining it. The man was undeniably the kind he liked—those long, brown, strong fingers on the newspaper, the lean build, the winging brows—but Saul had been husbanding pennies and rationing himself to one meal a day before he secured this post; if he lost it he’d be ruined. He was not going to commit indecent acts in a railway station convenience with a total stranger on his employer’s time, even if that was the stranger’s intent, which, he told himself firmly, it probably wasn’t.
The man was looking at him with amused puzzlement, as though Saul had spoken his determination out loud, and it dawned on him that if it wasn’t an approach, he must seem deranged not to acknowledge the fellow.
“Pardon me, sir,” he said. “I think we’ve met before?”
“I think we did,” the man agreed, lowering his paper. “Randolph Glyde, at your service.”
“Saul Lazenby.”
“Charmed.” Mr. Glyde glanced at Major Peabody, who hastened to introduce himself, and volunteered that he was an antiquarian researcher.
“How fascinating,” Mr. Glyde said. “And are you an antiquarian as well, Mr. Lazenby?”

“Lazenby is an archaeologist,” Major Peabody said over Saul. “An Oxford man, now devoting his time to my studies.”
“And what do you do, Mr. Glyde?” Saul asked, before the Major could say any more. “Are you a man of leisure?” The suit he wore was sufficiently well-made to suggest wealth, whether earned or inherited.
“Ah, no, so few of us can afford leisure these days. Those iniquitous death duties, you know. I work for my bread. I’m a commercial traveller.”
Death duties had hit the great landed estates very hard, and the newspapers were filled with stories of the newly labouring aristocracy. The heirs to earldoms were becoming radio announcers and photographers, while the daughters of dukes took up as mannequins or wrote pieces for magazines. Nevertheless, the disjunct between the man’s appearance and the idea of a commercial traveller was such that Saul found his brows lifting sharply. “You’re a salesman? Of what?”
“Wines and spirits,” Mr. Glyde said promptly.
“For whom?”
Mr. Glyde’s smile glinted. “Plummet and Rose.”
“Where’s your sample case?”


“I sent it on ahead.” The smile was widening.

KJ Charles spent twenty years working as an editor before switching sides to become a full-time writer. She hasn’t regretted it yet. KJ writes mostly queer historical romance, some of it paranormal or fantasy. She lives in London with her husband, two children, and a cat of absolute night.


Promotional post. Materials provided by the author.
Posted by Sandra at 6:00 AM