Blogtour: In Time I Dream About You by Gene Gant

In Time I Dream About You 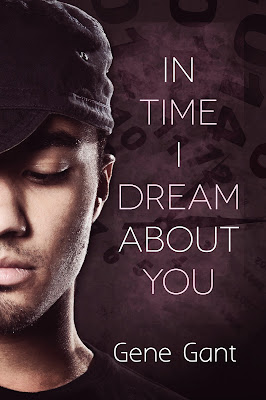 Gavin Goode, a promising high school athlete with good grades, forfeited his future when he joined a brutal street gang called the Cold Bloods. The gang’s leader, Apache, discovered Gavin is gay and framed him for murder. Now in prison, Gavin faces rape and abuse on a daily basis as gang members there attempt to break him. When his father is critically injured and Gavin reaches his lowest point, a mysterious ally appears. Cato is much more than the guard he seems. He has come from the future, and he possesses the technology to undo everything that’s gone wrong in Gavin’s life.

But meddling in the timeline has dire consequences, and Gavin faces an impossible decision: sacrifice himself and his father, or let thousands of innocents die instead.

I thought I’d start my blog tour here with a little excerpt from the novella. To set the scene, you should know that this occurs not long after Gavin has been forced to join the Cold Bloods, a gang led by a charmer who calls himself Apache. The gang members refer to Gavin as Triple X. He is serving as bodyguard to a fellow member named Crazy E, who is dealing drugs from an abandoned house in an inner city Detroit neighborhood, and he is about to experience a major milestone in his adolescence.
Happy reading,
Gene Gant


I was finishing up a series of geometry problems in the waning daylight when Crazy E ended a particularly long call, put his phone aside, hung his head, and sighed. I thought something was wrong but just as I started to ask if he was okay, he turned and looked at me.
“So. Triple X,” he said. “You don’t look like a gangsta.”
“Funny. I’ve been thinking the same thing about you.”
“Why’d you join up?”
“Apache made me an offer I couldn’t turn down.”
A sad little grin tugged at the corner of Crazy E’s mouth. “Oh.”
“What about you? Why are you here?”
“Apache’s my cousin. I sorta owe him. He took me in a couple of years ago after my mom ran off with this old dude she met.” He glanced at the book in my lap. “What’s that?”
I briefly held up my geometry textbook so he could see the cover. “I’m working numbers. Got a test coming up on Monday.”
“Yeah. I got tests next week too. I have to do my studying late at night. I hardly ever get to sleep before midnight.” He looked me over. “You graduating this year?”
“Nah. I’m a sophomore.”
His eyes widened a bit. “You’re kinda big for a sophomore, huh?”
“Maybe you’re just kinda little.” I was looking at him the way a kid would gaze at a brightly wrapped birthday present. It took a moment for me to realize I was flirting. I broke eye contact immediately, looking down at my book. “Didn’t you say you’re graduating this year?”
“Yeah. Apache doesn’t know it, but I’ve already applied to seven colleges, all of ’em out of state. I want to get out of here and be a psychiatrist.”
“You don’t think Apache will let you leave?”


“I don’t know. Probably not. I sell a lot of product, and I don’t steal dope or money from him. Most likely, he wants to keep me around for a while. But I’m gonna keep my grades up and get my ass accepted to a college on the other side of the country, and I’m gonna take off without even letting my cuz know I’m gone.”
“Sounds like a plan.”
“What about you?” Crazy E asked.
“I’m going into the Army after I graduate. Work my way up the ranks.”
“Good. That’s good. You gotta have a way out, or the Cold Bloods will get you killed.”
He stared at me for a while, and there was nothing shy about that gaze. He grinned again. “You like me, don’t you?”
I scowled. “What?”
He laughed, a soft huff of sound. “I see those little looks you keep sneaking my way.”
My whole face burned with embarrassment and fear. “Hey, man, I’m not gay.”
“Well, I am. I don’t want my cuz to know because the way he hates gays is pathological, but I think my secret’s safe with you. And yours is safe with me.”
Silence fell between us again, and we simply looked at each other. Metaphorically speaking, a door had opened, and I wanted to jump through it. Just as I started to move over and kiss Crazy E, he smiled and said in a low voice, “Customer’s coming.”
I hadn’t even noticed the lanky middle-aged white man who was making his way across the overgrown lawn toward us. He went directly to Crazy E, ignoring me completely, and I watched as they completed their transaction. The man stuffed his purchase into the pocket of his jeans, hurried to a dark-colored sedan parked at the curb, climbed in, and sped away along the darkening street.
Crazy E stood up and brushed off the back of his jeans. “I’m not expecting any more customers for a while.” He grinned at me.
I followed him around to the back of the burned-out house where we started a fire of a very different sort.

"If you ask me, a good book is the best form of entertainment in the world. A book can touch the human imagination at levels movies, TV, and video games will never be able to reach. It was love of reading that lead me to become a writer. I'm Tennessean by birth, a resident of Memphis for most of my life. I tried living in a few northern cities after graduating from college, but I couldn't take the brutal winters, and I missed good ol' southern barbecue. Now I make my home on a country lane outside of Memphis. When I'm not reading, working out, watching movies or spending time with family and friends, you can find me tapping away at my computer."