Blogtour: An American In Venice by Luca Domani

An American In Venice 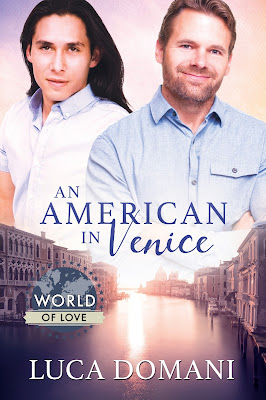 Tom has always been steady and predictable—a formula he’s sure will lead him to success in his career. When his method fails him and he loses his job, he throws caution to the wind for the first time in his life and books a European holiday.

Maybe Tom shouldn’t be surprised that Cupid’s arrow finds him in one of the most romantic cities in the world: Venice, Italy. When he encounters Giovanni working in the family pizzeria, it’s lust at first sight. Their time together touring the city is so magical it feels like a dream. But Tom is shy while Giovanni is charming and flirtatious. Tom has a newfound freedom with his unemployment, while family burdens weigh heavily on Giovanni. Add culture differences and miscommunication into the mix, and their brief romance might fade as quickly as the beautiful dream it resembles.

I enjoy some wordplay with my foreplay; and if it’s in another language, that takes it to a whole other level. In An American in Venice, Tom is pretty hot for Giovanni’s Italian love talk. Giovanni indulges him throughout the story, and I’ve provided a helpful glossary below of some of his best lines.

Ti desidero – I want you

Vieni per me – Come for me

Che puttana – What a slut

Ti voglio scopare – I want to fuck you

Voglio sentirti – I want to hear you

Voglio farti venire – I want to make you come

Ti adoro – I adore you

Sei belissimo – You are so beautiful

Read on for an exclusive excerpt including some of these lovely Italian phrases!

He pushed Tom against the wall, pinning him against the cold stone. Tom let Giovanni deepen the kiss, opening his mouth to let him in. Tom hardened as Giovanni pressed their bodies together and groaned when Giovanni moved his lips to his ear, whispering roughly in Italian.

“Ti desidero. Ti desidero adesso.” Giovanni ground himself against Tom’s leg, and Tom whined at the feel of Giovanni’s erection through the layers of fabric. Giovanni reached down between them and palmed Tom’s cock through his jeans. Tom thrust up into his palm eagerly. Giovanni nipped at Tom’s ear and continued to caress him through the denim.

Giovanni bent his head to lick Tom’s neck and worked at the button on Tom’s jeans, his own hard cock still pressing urgently against Tom’s thigh. Tom put his hands in Giovanni’s hair, tangling his fingers in it. The soft strands felt as amazing as he had imagined they would back at the bar. Tom cried out when Giovanni finally unzipped him and reached inside his briefs, sliding his hand over his aching cock.

“Che bel cazzo grosso,” Giovanni growled. He pumped Tom’s cock in his hand, and Tom felt like he was already there. If Giovanni kept saying naughty things to him in Italian, it would happen in another moment.

Giovanni ran his thumb over Tom’s slit, continuing to stroke steadily. Tom’s breath hitched as he tried to hold himself back from the edge.

“Fuck!” Tom choked out. He came hard into Giovanni’s palm, his head hitting the wall as he spasmed with pleasure.

“Che bello, Tomasso. Bellissimo,” Giovanni murmured when Tom had finished. He pulled his hand from Tom’s pants and licked his palm.

“You okay?” Giovanni asked, for the third time that evening.

Luca Domani has been writing stories since childhood. Although he has a doctorate in engineering, he has never given up on his dream of being a writer. He adores science fiction and is partial to postapocalyptic epics with zombie hordes, but at heart, he is a hopeless romantic. Luca is married to his high school sweetheart, who is his muse and the love of his life. They reside in Massachusetts with their dog and cat. An American in Venice is his second publication outside of a technical journal.

Connect with Luca via email.