Audio book Review: Wrapped Up In Chains by Cindy Sutherland 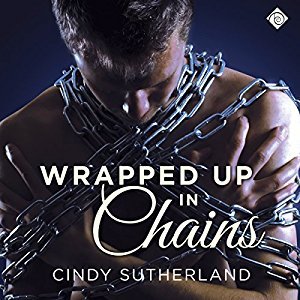 Devon West is a professional Dom who runs his own club, doesn’t believe in romance, and has never been in a long-term relationship. All this changes when he rescues Chase Mackenzie.

Chase is a runaway who has been kept as a slave since he was sixteen. Now twenty-three, he’s still innocent and sweet despite being severely abused and left behind by his Dom.

When Devon finds out that the man who held Chase hostage is the same man who hurt him terribly when he started learning about the sub/Dom lifestyle, he knows he has to keep Chase safe.

Spoiled rich boy and sociopath James Kingston is obsessed with Devon. He’s convinced Devon would be his perfect sub and Devon only thinks he’s a Dom because he needs proper discipline. Losing Chase to Devon is like rubbing salt in the wound, and he’s determined to get them both under his thumb. This time, Chase may need to rescue Devon.

The story was good the audio...not so much for me...

I've been wanting to read this one for ages now so when the audio book became available I saw it as a golden opportunity and said 'yes please' to the chance. 'Wrapped In Chains' is a story of finding love and second chances.

Because this was an audio book and both the author and narrator are new to me and unfortunately also because my rating for the book and for the audio portion are very distinctly separate I'm going to try and do this review in 2 parts. First the story and then we'll deal with the audio...

I really liked the story overall there was only one thing that I had a tiny niggle with so for me the book was 4 stars.

Devon West runs his own BDSM club and he's a DOM with very strong ideals and beliefs about a D/s relationship especially the DOM's responsibility towards the sub. I liked Devon. I liked that he was someone who basically lived and breathed his moral values in all aspects of his life both as a person and a DOM. Needless to say it made it easy to believe that he would go to the extend that he does to protect Chase, a young sub whom he finds being violently beaten when he walks into his club one night. Devon's immediate actions are strong, confident and all focused on protecting Chase and ensuring that he is safe from the DOM who Chase suffered years of abuse from.

Chase ran away from home afraid of how his family would react when they discovered he was gay. It was a young, naive, scared Chase who is taken in and abused for years by James Kingston. Someone whom he believed was really a DOM but in fact is only an abusive, sociopath who's spent his life being protected by his wealth and privilege as well as several years being obsessed with Devon. Kingston's convinced that Devon is his perfect sub he just needs "proper discipline".

Initially Chase felt so much more submissive than the personalities that I'm use to in BDSM stories but as the story progressed what had initially seemed like a totally submissive personality started to feel more like a combination of a sweet and gentle soul whose nature leaned towards submission and Chase went from seeming like someone whose nature was so totally submissive that he didn't seem to be able to make his own decisions to someone who as I said was sweet and gently and very capable of making his own decisions but also someone who craved the sense of balance and security that submission could give him.

Devon and Chase worked well for me as a couple in that their personalities meshed well. Devon was a DOM but not one who wanted to control his sub 24/7 he wanted the control in regards to the sexual aspect of their relationship but outside of that he fostered and encouraged Chase to be independent and his actions always seemed to be geared towards what was best for Chase and while this initially wasn't always a matter of what Chase wanted he truly did seem to have an ultimate goal of Chase becoming confident and self sufficient in his day to day life but more than willing to also be the DOM that Chase so obviously craved.


My one little niggle with the story was how quickly Chase became attached to Devon and yet, in some ways it was not really a stretch to accept this could happen given that Chase was held hostage for years and endured cruelty and abuse at the hands of the only person he's really had contact with for the past 7 years and suddenly he's rescued and cared for by someone who is his captures polar opposite. Someone who cares what he thinks and feels and treats him like his comfort and well being truly matters. it's like getting rain after a drought how can you not enjoy and appreciate it?

The other thing that balanced the immediate sense of attraction between Devon and Chase was Devon's sense of responsibility towards Chase and what had happened to him. While it wasn't Devon's fault in any way, I like that he realized that what Chase really needed wasn't being in another relationship but having help with dealing with the damage that being held hostage and abused for years did to him physically, emotionally and mentally.

While the story had a bit of a fairy tale feel to it in the handsome knight (Devon) rescues the damsel in distress (Chase) and vanquishes the evil villain (James Kingston) way. It was still a very enjoyable and well done story and I really liked it.

However, what really didn't work for me was the audio on this one. John Anthony Davis was the narrator for this book and while I liked his voice in terms of it's tone and that the voices were distinct and easily discernible in terms of who was speaking. I found that at times it was slow and almost hesitant or stilted when it came to fluidity and unfortunately that made it feel almost monotone at times. While Chase's voice for me had a too young sound to it that made me think of a young boy in his early teens rather than a young man of 23 or 24 which he was suppose to be. This unfortunately happened enough that I found it was a definite distraction from the story for me. So while the story was 4 stars for me...the audio was at best 2.5 stars. So over all this one's getting 3.5 stars from me.

An audio book of "Wrapped Up In Chains" was graciously provided by the publisher in exchange for an honest review.