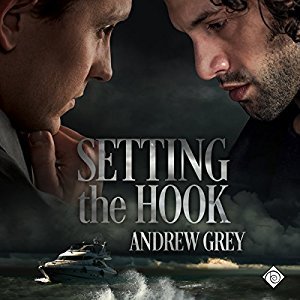 It could be the catch of a lifetime.

William Westmoreland escapes his unfulfilling Rhode Island existence by traveling to Florida twice a year and chartering Mike Jansen's fishing boat to take him out on the Gulf. The crystal-blue water and tropical scenery isn't the only view William enjoys, but he's never made his move. A vacation romance just isn't on his horizon.

Mike started his Apalachicola charter fishing service as a way to care for his daughter and mother, putting their safety and security ahead of the needs of his own heart. Denying his attraction becomes harder with each of William's visits.

William and Mike's latest fishing excursion starts with a beautiful day, but a hurricane's erratic course changes everything, stranding William. As the wind and rain rage outside, the passion the two men have been trying to resist for years crashes over them. In the storm's wake, it leaves both men yearning to prolong what they have found. But real life pulls William back to his obligations. Can they find a way to reduce the distance between them and discover a place where their souls can meet? The journey will require rough sailing, but the bright future at the end might be worth the choppy seas.

Well this one caught my attention...hook, line & sinker...

'Setting the Hook' is the first book in Andrew Grey's latest series 'Love's Charter' and I do have to admit it's been a while since I've enjoyed one of this author's books as much as this one.

William Westmoreland has a high pressure life in Rhode Island. Helping his father run the family business and trying to live up to the expectations of his parents. Who I have to admit in spit of everything else were at least accepting of William's sexuality.  William's only bit of self indulgence is his twice a year trips to Florida to charter on Mike Jansen's fishing boat where he can relax, catch some fish and enjoy the scenery...all of the scenery.  But he's never done more than look.

Mike runs his charter fishing service so he can provide for his mother and daughter and he keeps everything else firmly locked in the closet to ensure that they stay safe. Following his heart isn't an option in Mike's eyes.

Neither of these men are looking for a relationship. For different reasons each man's life is ruled by fear making love a complication that they just don't have room for. William doesn't have time and lives in fear of letting his father down...Mike lives in fear of what he could lose if he follows his heart.

When Mother Nature steps in and forces these two men together they begin to realize that they can no more fight their feelings than they can the storm raging outside and keeping William in Florida.

The relationship between these two wasn't a direct line to happily ever after for either of them. There was the real world to deal with, choices and decisions to be made and none of it was easy for them. William returned to Rhode Island to the life that he felt he couldn't escape and this was when he realized that it was a life he couldn't and didn't want to continue to live. At the same time Mike began to realize that while he loved his mother and daughter and wouldn't change anything that had happened in the past he needed to find a way to redefine his future and still provide for them and keep them safe.

These men and their story worked for me. Things weren't easily resolved for them and at times the floundered but I loved that they were both willing to pick themselves up, dust themselves off and keep trying, keep working to find a way to be together and create a life together.

As well as letting their fears rule their lives, both William and Mike treasure their family in their own way. Mike's mom is loving, strong and supportive and does her best to help him raise his daughter. At the same time she sees so much more of her son and who he is than he realizes and truly wants the best for them.

William's parents were a bit more complicated and at the beginning I can honestly say I was not a fan and while I never fully warmed up to them as the story progressed I came to appreciate the potential that was beginning to grow as his parents began to change and see that the life there son was leading was neither the life he wanted or needed. Throughout the story there was conflict between William and his parents as he struggled to change his life so he could be with Mike. I liked that we got to see things between William and his parents start to improve. It was nice to read a story where a child and his parents were able to work through their conflicts come out on the other side with a stronger relationship rather than being alienated from each other.

Greg Tremblay was the narrator for this story and as always he did not disappoint. The voices worked for me, they were expressive and conveyed emotion giving depth and life to the story.  Mr. Tremblay is definitely one of my favorite narrators, his audio books without fail

'Setting the Hook' has given a solid start to this series and I'm definitely looking forward to continuing with 'Love's Charter' and seeing whose story will come next.

An audio book of 'Setting the Hook' was graciously provided by the publisher in exchange for an honest review.