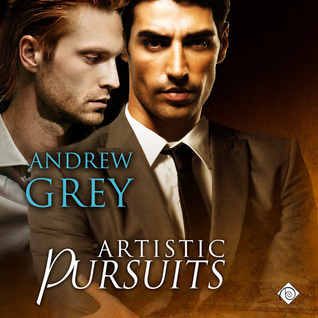 
Frank Jennings is an FBI agent looking for redemption. Leslie Carlton is an Interpol agent looking for a thief. Attraction flares from the moment they meet on a case searching for a stolen triptych of unique Tiffany windows, but after a single night of stunning passion, Leslie is called back to London to continue his search there.

When the case heats up again, Leslie returns to the States—and to Frank—but their investigation is complicated by their tumultuous feelings. Is it possible for two dedicated detectives to pursue each other while they’re tracking down stolen art and the unscrupulous man who steals it?

I'm betwixt and between on this one...

'Artistic Pursuits' is book #3 in Andrew Grey's 'Art' series and I have to admit I'm not sure how I'm feeling about this one. There was a lot that I liked about this story but there were also a few niggles. So at the end of my ponderings this one for me was a little better than good but didn't make it into 'I really love it' territory.

I really liked the overall plot on this one. Mystery/thriller type stories are and always will be catnip for me. Add in that the focus of this story is stolen artworks...specifically Tiffany windows and it was definitely a win for me.

While you could read this one as a stand alone there is a bit of a cross over with Brian and Nicholai the MCs from book 2 having a role to play in this story, so I would probably recommend reading or listening, as I did, to the first two stories...not necessary but encouraged.

Frank Jennings is an FBI agent and one of the MCs in this story and Leslie Carlton works for Interpol. These men meet when the cases they are working on appear to be connected. When Leslie shows up in the states Frank doesn't hesitate to offer him a place to stay. Needless to say working their mutual cases together as well as spending a bit of time in close proximity only fuels the initial attraction that both men felt. After spending one passionate night together Leslie is recalled to London.


When Leslie is finally able to return to the states, while both men are still interested picking up where they left off isn't an easy or instantaneous event, it involves some awkward moments as both men are forced to admit how they feel and accept their share of the blame for why there was no communication during Leslie's time back in London.

My niggles were in regards to Frank's behavior and how drastically his behavior would change at times and some of the conversations between him and Leslie just for want of a better explanation didn't feel right to me...so very, very subjective and I'm sure that while some people might have the same impression, I'm sure others don't. So this isn't a good or bad thing just an 'it didn't work for me thing'.

As well as the overall plot line I very much enjoyed the character of Carl. Carl was a secondary character who worked with Frank and showed himself to a good friend to Carl and Leslie but he was also very likable and interesting in his own right and a character that I'd be interested in seeing the author give us more of.

John Solo was once again the narrator for this audio book and in general he once again did a solid job with this story giving us distinct voices that conveyed the characters emotions and individuality. But again I had a little bit of a niggle with Leslie's voice, for me it just didn't seem British but I freely admit this was definitely a totally personal and subjective opinion. I actually played a clip of Leslie speaking for my personal guinea pig (more affectionately known as 'the hubby') his family was from England...parents came over to Canada just before he was born, he still has family there. So, I thought he would be a fairly knowledgeable and objective person to experiment with and when I played him the clip and asked him what country he thought the speaker would be from his reply with very little consideration was 'England' so there you have it. Maybe, Leslie's voice wasn't working for me but that doesn't mean it wasn't a solid reflection of the man's country of origin. Again, not a good or bad thing just an 'it didn't quite work for me thing'.

In summary, more things worked for me than didn't and I did enjoy this one more than the first book maybe a little bit less than the second and truthfully I don't feel even a little bit deterred from wanting to carry one with this series. Book 4 is called 'Legal Tender' and sounds like it's going to be interesting so I'm definitely game for it and with any luck there'll be a book 5 with an MC named Carl...just puttin' that out there for the universe.

An audio book of 'Artistic Pursuits' was graciously provided by the publisher in exchange for an honest review.