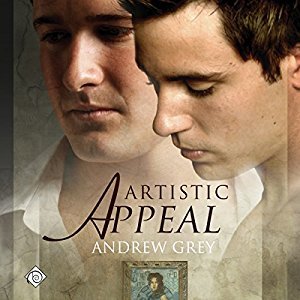 Brian Watson knows close friends Gerald Young and Dieter Krumpf have an ulterior motive when they invite him to their Christmas party. Brian has taken over the case to secure the return of the famous painting called The Woman in Blue to Dieter, but they don’t want Brian to be all work and no play. They intend to set him up with a friend, but he’s not who catches Brian’s eye. Instead, it’s Nicolai, the deaf art restorer caring for the works already returned to Dieter.

But pursuing Nicolai won’t be easy. A year ago Nicolai had to fight to regain his independence after a bad break-up, and he’s reluctant to give up his freedom a second time. Plus, Brian has competition in Justin, Nicolai’s ex, who wants him back badly.

Nicolai’s reluctance isn’t the only roadblock. Brian was married to a woman for almost ten years. Now he has to confess to his mother, his ex-wife, and his young daughter that he loves a man—all while conducting a potentially groundbreaking court case and trying to convince Nicolai that love isn’t about co-dependence, it’s about support.

I really had to think long and hard on whether I was going to give this one a chance. Mostly because book 1 in this series was barely ok for me and I'm a bit of an Andrew Grey fan so, truthfully this made me a bit sad, I'm also a firm believer in second chances so ultimately I figured I should put my money where my mouth is so to speak and that's how I came to be here writing a review for the audio book 'Artistic Appeal' book #2 in Andrew Grey's 'Art' series.

While the MCs in 'Artistic Appeal' are a different pairing a lot of the events from 'Legal Artistry' the first book in this series carry forward to this story resulting in the fact that while I may not have enjoyed the first book as much as this one, I am glad that I took the time to listen to 'Artistic Appeal' because it definitely was to my benefit when I got to this story.

When Gerald and Dieter invite Brian to a dinner party with the hopes of playing matchmaker with one of Dieter's friends things don't work out quite the way they're anticipating.  It's Nicolai who captures Brian's attention. Nicolai is an art restorer who has been taking care of the artworks that have recently been returned to Dieter and he's fast becoming a dear friend to Dieter as well.

I really liked the character of Nicolai. He's deaf but he's portrayed as an independent, capable and very functional person. Like anyone who has a sensory impairment he's learned to adjust and compensate for his hearing loss.


Brian's recently divorced and has custody of his daughter, Zoe. Being single and gay is new for him and he's doing his best to keep his life balanced between work, parenting and just being a newly out gay man.

Both Brian and Nicolai had their share of added drama. Brian with his ex-wife, who to say the least is a real piece of work and his mother who, thankfully got her act together. For Nicolai it was his ex-boyfriend/turned stalker who randomly decides he wants Nicolai back after a year of separation.

Once again John Solo was the narrator for this story and overall I enjoyed his narration. He has a pleasant voice and adds variety and expression to the voices of the different characters ensuring that everyone doesn't sound the same...a definite plus in this listener's opinion.  Admittedly my niggle was Zoe's voice and maybe I'm just too damned fussy, I'll own that. When it comes to children's voices I admit it, I'm a tough sell.

'Artistic Appeal' is an easy and sweet romance with a bit extra for added interest. I definitely enjoyed this more than the first book and plan on checking out what's going to happen next in this series.

An audio book of 'Artistic Appeal' was graciously provided by the publisher in exchange for an honest review.