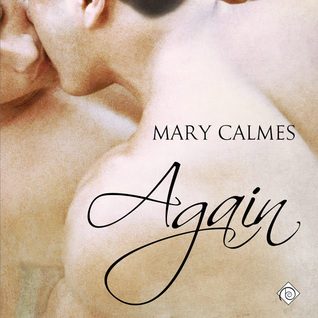 
Six years ago, Noah Wheeler went to meet his boyfriend, Dante Ceretto, at the airport, and his world ended. Dante was kissing someone else and claimed to be in love. So Noah took his heartbreak—and the sonogram pictures of their surrogate child—and closed the door on the big picture of what he thought his life would be, focusing instead on the piece of the dream he got to keep, being a father.

Now on vacation in Las Vegas, Noah accidentally runs into Ceretto's family, and then the man himself, and learns that not only was he deceived, but Dante was as well. Now Dante wants to make up for lost time, six years’ worth, and to do that he needs Noah, the only man he’s ever loved, and Grace, the daughter he didn’t know he had, to give him a chance at happiness. Dante’s going to have to take a crash course in communication and seduction, though. Noah’s not going to fall in love just to be broken again.

This was a happy little interlude...

Ok, so we've got Mary Calmes and it's narrated by Nick J. Russo so you can pretty well assume there were no surprises here. It's been 6 years since I read this story so the opportunity to review the audio book was a task I was more than happy to take on.

'Again' is a short sweet story at just over 100 pages as an e-book and 2 hrs as an audio book. When Noah shows up at the airport to meet Dante his partner and the love of his life only to find Dante kissing someone else and telling him that he loves her. Noah goes home alone with the sonogram pictures of the child that he and Noah had planned on having.

Years later Noah is on vacation to attend a friend's wedding and of course he has his daughter and his current boyfriend with him and this is the perfect time for him to encounter Dante's family and eventually Dante, himself. Needless to say this is when the real fun begins. I love Dante. He's totally over the top and he knows what he wants and of course what he wants is Noah and their daughter...and he's determined to get them.


Anyone who's read even a few of my reviews will know I am a dedicated Mary Calmes fan and Nick J. Russo is totally one of my top 5 favorite narrators...actually it's more like he's one of my top 3. So needless to say my only real issue with this story is I needed more...not that the story needed more, but I did.

There were a few wonderfully over the top moments but one in particular when Noah and Dante enter Noah's hotel room to find Noah's current boyfriend in bed with someone who's obviously not Noah. Dante's reaction is to cover Grace's eyes and laughing declare that it was awesome...my sense of humor is just warped enough that I was right there with Dante. Granted there's a bit more to it than this but you'll need to listen to the audio book or at least read the e-book for all the details...because it was awesome.

'Again' is a short, sweet, adorable over the top romance about second chances as only Mary Calmes can write and Nick J. Russo can do justice to.

An audio book of 'Again' was graciously provided by the publisher in exchange for an honest review.