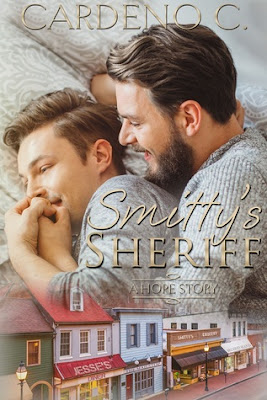 Smitty's Sheriff is told from the perspective of both MCs: Todd and Richard.

Todd is in his early-20s. He's young, flirty, and a little clueless. He's not good at taking control of his life, so for three years his older lover took care of him.

Then six months ago, Sheriff Richard walked away suddenly and without explanation. Todd misses Richard but isn't sure how to get him back.

Richard is nearly twenty years Todd's senior, and he's a man who likes to be in charge. He doesn't believe that Todd can be faithful. After all, Todd slept with other men while they were together. Granted, Richard never told Todd not to and didn't want to be a possessive partner, so he left instead.


Richard and Todd suffered from a classic case of NON-COMMUNICATION. Richard didn't trust Todd, and Todd was just sleeping with other guys because he didn't think Richard was serious about him (which, frankly, is a really stupid reason). Neither man ever mentioned a committed relationship.

When they're brought together to care for Todd's niece, Molly, Richard sees a more responsible side of Todd.

I read anything CC writes, and this is a cute story but definitely not my favorite in the series. I thought Richard treated Todd like a child and the separation could have been easily avoided.

Also, Lucas (one of the MCs from the first book) was a side character here, and he was really annoying.