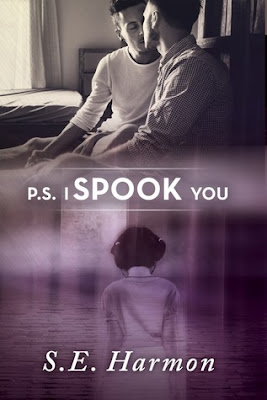 SSA Rain Christiansen used to be the agency’s golden boy. It just takes one moment of weakness, one slight, tiny, itty-bitty paranormal sighting, and all of a sudden he’s the agency’s embarrassment. His boss gives him one last chance to redeem himself—go down to Brickell Bay, play nice with the local police, and leave the ghost sightings behind. Rain is determined to do exactly that, even if it kills him.

Cold-case detective Daniel McKenna’s latest investigation is going nowhere fast. Five years earlier, high school student Amy Greene went missing after leaving her part-time job and was never seen again. Daniel is glad to finally have the FBI help that his department requested, even if it does come in the form of his ex.

It doesn’t help that Rain is pretty sure he’s falling in love with Danny all over again—if he ever stopped. Add to that the frustration of seeing ghosts at every turn while he works a case that’s stalled in its tracks, and Rain is starting to wonder if second chances and happy endings are just for fairy tales.

Creative, sexy, and insanely funny, P.S. I Spook You is a big win for S.E. Harmon!

Two thumbs UP for:

~ Being in Rain's head: If you get stuck with a name like Rainstorm courtesy of your eager, new age parents, you gotta give life the finger. And Rain does. He overthinks everything, but seeing the world through his eyes, ghosts and all, is an experience not to be missed. Rain is smart, irreverent, and hilarious.

We were out of Cheerios. Out of coffee. And now, no morning fuck on the kitchen island. The day was going to hell in a very rickety handbasket.


~ The mystery: I wanted to know what happened to Amy, and I was never bored with the investigation.

~ Danny: There are so many reasons to love Danny, with his dirty mouth, constant five o'clock shadow, and sensitive heart.


~ The sex : hot and FILTHY and worth the wait.

~ Secondary characters, both living and dead.

~ Anna's story: Nope, I don't believe that Danny wouldn't have said anything about Anna to his boyfriend of three years, especially since Rain was a detective. And once Rain talks to Anna, he never says a word to Danny. I was hoping it would be a moment, something to bring the men closer, but it was dropped.

~ The storage unit situation: If units aren't paid for or claimed within a few months, the contents is auctioned off. There is no way a storage unit would have sat there untouched for FIVE YEARS. This was a ridiculous oversight on the author's part.

~ Ethan's wish: Ethan wanting his parents to know the real him was an important aspect of this book, but it was brushed aside and summarized in a couple paragraphs. The closure was not on page. Ethan deserved better.

~ Rain going off half-cocked in the last few chapters: This was so out of character. Rain was savvy and experienced. At the very least, he would have called Danny.

For the first 80 percent, P.S. I Spook You was a 5 star book, but the last 20 percent was slightly disappointing. The ending is a fuzzy HFN.

Maybe this is the first book in a series featuring these MCs? I hope so because I needed a much stronger HEA for Rain and Danny. They have a lot to talk about. And there are more ghosts with stories to tell.