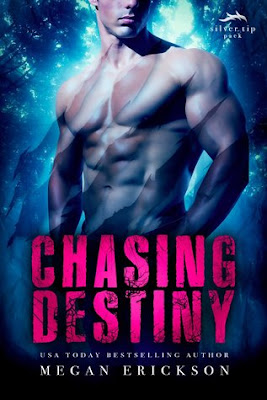 Almost dying during a pack uprising has a way of shaking things up. I’m no longer Mr. Laid Back now that there’s an itch under my skin I can’t scratch.

On a volunteer mission that goes beyond the walls of our compound, we enter the territory of a pack long thought dead, and find ourselves on the business end of their spears.

What I’m not prepared for is what I find within their walls—The one shifter I never thought I’d see alive, the one I’d mourned twice, the one I’d always loved. He is alive, and if I have anything to do with it, he’ll stay that way. But he’s got secrets, and exposing them could lead us to an enemy worse than the bloodthirsty undead shifters wanting to kill us all…

Chasing Destiny doesn't work well as a standalone. Megan Erickson has created a dystopian fantasy filled with werewolves, Weres, and Noweres (Were zombies); it's terrifying, brutal, and utterly breathtaking.

If you like dirty, intense, riveting sex pulsing with need, well ... Bay and Nash are absolutely mad for each other. They may not be True Mates like Dare and Reese, but they are mates—better together than apart.

If only Nash would stay.


Nash is haunted and regretful. Fearful of hurting Bay and the Silver Tip pack, he tries to escape from the one man he's ever loved.

But Bay won't let Nash go. Bay knows danger awaits; he knows Nash is keeping secrets. But Nash is worth it. He'd already lost Nash once. He won't lose him again.

Chasing Destiny is a thrilling and at times heartbreaking ride involving an evil pack, a trek through the wild, a very special plant, a brave rescue, hurt/healing at its finest, a miraculous surprise, and an overwhelming, passionate love.

The alternating POV shows us the pain and loneliness both men have suffered, but while Bay had his brother and his pack, Nash had nothing but guilt and despair.

Nash is a tortured soul, but in the end desire prevails—the desire to be free and chase his destiny.

LIVE. LIVE AND FIGHT AND LIVE.