Spotlight: The Palisade by Rosalind Abel

Confident businessman Joel Rhodes sees the small California town of Lavender Shores as nothing more than a business opportunity and a final stepping stone to the position he’s been working toward his entire life. It was supposed to be just one night in town to close the deal, and sleeping with one of the local men, no matter how gorgeous, meant nothing more than a few hours of fun.

Andrew Kelly is perfectly content with the life he has in his hometown. So much so that the only thing missing is someone to share it with. Going to bed with a tourist was never meant to be the answer to his dreams, just a beautiful distraction. He could get back to looking for Mr. Right the next day.

Both Andrew’s and Joel’s worlds are turned upside down when a few hours of pleasure get extended to a couple of days. Even that shouldn’t have been a big deal. You can’t fall in love in that amount of time. That isn’t how it works. However, if destinies collide, a few short days may be all it takes to find your soul mate.
Even so, when secrets and motivations get tangled, fate may do nothing more than leave two hearts in pieces.

So many thanks to My Fiction Nook for hosting a blog spot for The Palisade tour! And thank you to each of you for stopping by for the excerpt and giveaway.
The Palisade is the first book of the Lavender Shores series. Each of the novels will be able to be read as a stand-alone or as part of the series. I’m going to let the excerpt and blurb speak themselves, but I will promise you romance, steamy sex, laughter, all the feels, and a happily ever after.
The Palisade is available Amazon as of yesterday, June 20, 2017. It is also part of Kindle Unlimited.
I can’t wait for you to fall in love with Andrew, Joel, and Lavender Shores.
Through this blog tour, I’ve shared several sexy, romantic, and downright steamy portions of the novel. But, for today, I wanted to give you one of the funny moments. Joel has spent his first night at Andrew’s house. This is the morning after. . .

The smell of coffee wafted into my dreams, waking me up with a comforting slowness. I stretched, keeping my eyes closed, not wanting to lose the moment. The warmth of the bed, the memories of last night, in the kitchen, on the couch during a movie, in this bed. I breathed deep, the smell of the coffee mingling with Andrew’s scent on the sheets.
Look at that. I’d thought my favorite smell was vanilla spice. I’d been so, so wrong.
There was a buzz then a vibrating sound.
Fuck.
I opened my eyes, the peace of the moment already fading. The other side of the bed was empty, and I felt a little lurch in my gut.
Of course, moron. The smell of coffee didn’t happen on its own. Still, I stretched out my hand and touched the place where Andrew had curled against me all night. Still warm. Barely, but it was there. In true crazy-man fashion, I started to roll closer to the spot, breathe him in deeper, and then the vibrating began again.
And again—fuck was the only response to that. However, better to just get it over with. Rolling the other way, I snagged my cell off the bedside table.
Three missed calls.
And now my father had turned to texting. Which he hated.

This is unacceptable, Joel. Get the paperwork signed and get your ass home.

Your ass. Wow, even at his most furious, Dad typically stayed business-tycoon appropriate.
He woke me on my last full day with Andrew and before I had coffee. It was like he wanted me not to play nice.

As I told you last night, it’s the weekend. Things are different here. Slower. It will happen tomorrow.

There was a long pause before he responded. I could see him staring at his phone, seething. I’d be lying if I didn’t admit that part of me nearly texted him back, apologizing and promising to make sure the paperwork magically got filed on a Sunday. Soft clanging of dishes or silverware drifted in from the kitchen, reminding me that the last thing I wanted was to cut our final day short.
Another buzz.

I’m beginning to question if you are as prepared for the leadership role as I thought. Comfort Coffee needs to be in the hands of someone capable and committed.

Fuck you.
I barely caught myself before I hit Send. I erased it and typed again.

My commitment is obvious. The paperwork will be signed tomorrow, and we can start on Comfort Coffee as early as next week. My cell will be off for the rest of the day. I will be in contact after the signing.

I hit Send, powered down the phone, collapsed back into the pillow, and focused on my thudding pulse, as it was entirely likely I’d just triggered a stroke or a heart attack.
Tomorrow. I’d see him tomorrow. He could rage at me then. By tomorrow afternoon, I’d be back in San Francisco. At the office. Back to my life. A life that was everything I wanted, or at least was building up to it.
And I dreaded it. The thought of it left me cold and a little terrified. Which didn’t make sense. Why terrified?
This was what should terrify me. Lying in Andrew’s bed, wanting to stay. With him, in Lavender Shores. Wanting to throw everything away and just be here, with the smell of whatever subpar coffee was brewing, the scent of his body around me, the sounds of him moving in the kitchen. I wanted to toss my entire life away? For this? For a man I’d known since Thursday night?
Yeah, that should terrify me.
And it did.
Sitting up, I swiped my phone off the side table once more and moved my thumb to the Power button. I could fix this.
Andrew laughed in the kitchen, halting me.
Then a second laugh. I could just picture him. Maybe he’d dropped an egg or was listening to something funny on NPR.
I put the phone back.
One more day. I’d keep my brain turned off, as much as I could, for one more day. I’d enjoy a life I’d never wanted or experienced before. I had the rest of my life to reach the goals I’d worked for endlessly. They would be there waiting when I got back to town the following afternoon. But I was taking one more day for myself. One more day to commit Andrew Kelly to my memory, a fantasy of a different life. A life meant for someone other than me. But for now, for the next twenty-four hours or so, it was a life meant for me, and Andrew Kelly was mine.


Giving in to the impulse, I pulled his pillow to my face and breathed deep. My cock responded instantly.
After throwing off the covers, I got out of bed and headed for the bedroom door, then thought about exactly what I wanted to do to Andrew. I pictured a breakfast encore to the dinner entertainment we’d had the night before. And that required teeth brushing.
My erection didn’t fade as I vanquished my morning breath, my mind planning exactly what I was going to do with his body. By the time I silently pulled open the bedroom door and padded down the hall, my dick was leaking, so urgently ready for him.
I rounded the corner into the kitchen, planning on sneaking up behind him as I had the night before, and froze, every synapse of my brain short-circuiting.
Andrew sat at the small table, coffee cup lifted halfway to his lips, his blue eyes wide. Next to him, his father sat in a similar fashion, but his lips curved into a grin.
“Well, good morning to you too, Mr. Rhodes. Looks like you woke up on the right side of the bed.” Robert tipped his coffee mug in my direction in a makeshift salute.
My hands flew to cover my crotch—and by flew, I mean they stayed exactly where they’d been for way too long and then uselessly darted over my balls so quickly that they hit them, causing my erection to jut forward. I literally turned and ran, yelling out over my shoulder, “I’m so sorry. I’ll find clothes.”
Robert called after me. “No need, Joel. Might as well be comfortable.”
“Dad!” I heard a smack and figured Robert would have an Andrew-sized handprint on his arm.
Back in the bedroom, I glanced at the windows. Andrew’s condo was on the third floor. If I jumped, at most I’d break a leg. I could still crawl away.
Andrew walked through the bedroom door and shut it behind him. His eyes were still wide in shock, but I could tell he was making an effort not to laugh.
“If you laugh, I’m killing you.” I started to point at him, but kept my hands covering as much of myself as I could.
He bit his lip and took a deep breath through his nose.
“I’m serious. Dead. You’ll be dead.”
He lost it, his laughter bursting from him loud and a bit unhinged. He laughed as tears instantly began running down his face. And even with the closed bedroom door, I could hear Robert’s laughter joining in. The fucker.
I glared at him. “I hate you.”
Still laughing, he crossed the room and wrapped me in his arms as I tried to squirm away.

I hope you enjoyed some of the humor found in The Palisade. I’m extending the sale for another day, so hop on over to Amazon and pick it up. Also, feel free to explore all that Lavender Shores has to offer by visiting http://www.lavendershores.com .
Follow along with the rest of the blog tour for more information, excerpts, giveaways, and fun. 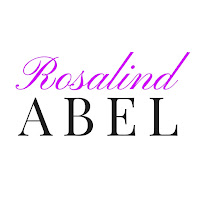 Rosalind Abel grew up tending chickens alongside her sweet and faithful Chow, Lord Elgin. While her fantasy of writing novels was born during her teen years, she never would have dreamed she’d one day publish steamy romances about gorgeous men. However, sometimes life turns out better than planned. In between crafting scorching sex scenes and helping her men find their soul mates, Rosalind enjoys cooking, collecting toys, and making the best damn scrapbooks in the world (this claim hasn’t been proven, but she’s willing to put good money on it).

She adores MM Romance, the power it has to sweep the reader away into worlds filled with passion, steam, and love. Rosalind also enjoys her collection of plot bunnies and welcomes new fuzzy ones into her home all the time, so feel free to send any adorable ones her way.

Each commenter will be entered into a raffle for a $5.00 Amazon gift card.
The contest closes at midnight EDT on 6/27/17. Please be sure to include your email address so Rosalind can contact you if you should win. Good luck!