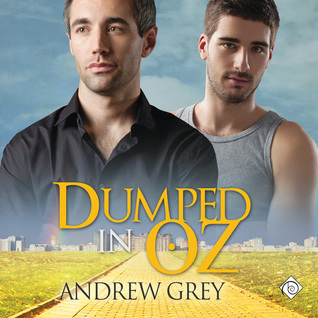 Because of an opportunity he’d be a fool to turn down, Lyle Powers transfers to his company’s warehouse in central Kansas. The last thing he expects is to meet another gay man in the small town, let alone one who captures his interest.

Roger Kypers is a recovering alcoholic with a twelve-year-old daughter he only gets to see for part of the summer. Neither Lyle nor Roger is looking for a relationship, and they fumble at the start, yet emotions build as Roger shows Lyle the landmarks of Oz.

But when Roger’s wicked witch of an ex-wife threatens to take his daughter away for good if he doesn’t act “normally,” he’s faced with the challenge of letting her get away with it, or fighting to accept himself and standing up for what he knows is right.

'Dumped In Oz' is the first book in Andrew Grey's series 'Tales From Kansas' and I liked the story well enough, but nothing about it really put me over the moon.

When Lyle Powers is given the opportunity to transfer to his employers warehouse in central Kansas...he's not thrilled about it, but as his friends point out to him it may just be the change he needs to get himself out of the rut he's let his life slide into and it's only for a year. After giving it some consideration Lyle realizes that while he's not thrilled to be leaving his home, this just might be his opportunity he needs to give both his personal and professional life a re-boot.

When Lyle arrives in small town, somewhere Kansas, in spite of his reservations he's surprised to find how much he likes what he sees, and while he's resigned to his fate, he's also determined that he's going to make the most of his year in 'Oz'.  He's determined to do his best at work and to get out there and meet people, maybe even make a few friends rather than hiding at home with his television.

It's on one of his trips out to meet people that Lyle meets Roger Kypers. Roger's a local, he's lived in this town all his life, he's also an alcoholic who's fighting hard to stay sober for the sake of his teenage daughter and the restaurant that he's poured his heart and soul into getting off the ground all this from the closet he's hiding in the one that possibly connects Oz to Narnia.

At the heart of this story is a sweet tale of friendship and love. While Lyle and Roger share a mutual attraction I was also left with a very strong feeling of friendship between these two as Lyle tried to be Roger's friend and help him navigate his fears over coming out and living life as a gay man. It's not so much living life as a gay man that Roger fears, but what he might lose if he does. Roger knows that his ex-wife...(let's just think 'wicked witch of the west' here), is determined to keep their daughter from him, if he doesn't 'act normally' (insert stay in his closet here).

It's not only the love and support of his awesome daughter and his newfound friend and lover Lyle but a band of strong and supportive munchkins (think community here) that Roger soon begins to realize that maybe...just maybe, his life can be more than just his restaurant and the occasional visit with his daughter...maybe, he can have a family...a real family that he loves and that loves him back.

As Roger finally begins to feel like life is on track where is daughter is concerned, he also realizes that there's still one unanswered question that keeps his happiness hanging in the balance...'can he be enough to keep Lyle traveling down the yellow brick road with him?'

I really liked the premise of this story and I like Roger and Lyle. Lyle was a genuinely nice guy and while he didn't always agree with Roger and felt that Roger was being a bit to timid about things he wasn't a bully in his actions and efforts to get Roger to see that standing up for himself wasn't the wrong thing to do it was the necessary thing, not just for himself but for his daughter's sake as well.

Roger's insecurities to me were very largely connected to his concerns over losing his daughter, whom he so clearly loved and adored. Roger's love for his daughter and the author's ability to make me as a reader feel the strength of if was one of my favorite things about Roger.

I also really liked the ending for this story. I was very much left feeling like these two men were standing together on their yellow brick road and heading in the same direction towards a much deserved happily ever after.

The narrator for this audio book was Rusty Topsfield and while it's not my first audio book by this narrator I have to admit to being a little uncertain about how I feel. In terms of my basic 'things I look for in an audio book' he ticks the items on the list but somehow the voices he gives me don't quite match up to what's in my head. So just like when I listened to the audio book of Santino Hassell's 'Sutphin Boulevard' it wasn't a matter of bad or good...more a case of I just didn't connect with this narrators voices.

An audiobook of 'Dumped in Oz' was graciously provided by the publisher in exchange for an honest review.