Hamilton Dillon is a high class Manhattan escort, polished, well dressed, and cultured. Colin O’Neill is recently divorced, questioning his sexuality, and disappointed by his first fumbling gay hookups. So he figures, why not hire the best of the best to show him the ropes?

What he doesn’t know is that Hamilton Dillon is really Henry Davis, yet another New Yorker living on the financial edge, cobbling together several jobs to make a living. “Hamilton” has one great suit he can wear on an overnight date, but Henry’s got a good friend at GQ who makes a nice side income renting designer men’s wear for weddings, job interviews, and oh yeah, high end escorts on long weekend assignments. The “top agency” that represents “Hamilton” is really just a smartass lady in India with a Skype account, whose face Henry’s never seen. Oh, and Henry’s also the gruff and very unpolished New York Straight Man “Dillinger,” a solo porn star.

In other words, he’s not at all who Colin thinks he is. Which is just fine, until their relationship gets… complicated.

Colin O’Neill hung up the phone, dizzy with excitement and fear. He’d done it. He’d called the number, talked to the agency, and booked a “date” with Hamilton Dillon.

He’d looked at Hamilton’s Rentmen.com ad a hundred times, at least, over the last three months. He’d looked forward to new profile photos the way a kid keeps an ear cocked for the ice cream truck. Even though all the profile pictures had been beheaded for discretion, it didn’t matter. Hamilton Dillon had a way of posing that expressed more personality with his body than most other guys ever did with their faces.

The way he sat on a park bench in nothing but a pair of running shorts and Nikes, shirtless, manspread, his arms thrown over the back of the bench, his strong graceful neck taut, telling you that the face just out of frame was tilted up towards the Central Park sunshine, that the man was reveling in his easy beauty, the unique joy that comes from being young and hot and free in New York City…

Then the way he floated in the air in those same shorts and Nikes, leaping for a football, the camera capturing him from behind in the moment the ball touched his fingers, the imminence of his success apparent, ordained, the muscles in his back bunched, the mass of his shoulders gathered together, sweat flying off his brown hair, in the seconds before you knew he landed on the lawn, arms curled around the ball, surely to rise in triumph and be slapped on the back by all his equally hot and shirtless buddies…

The way he sat at a café table, in a slim fit navy blue polo shirt, one of his sculpted vascular arms holding open a well-worn copy of The Fortress of Solitude and the other just toying with a cup of espresso as if it was the back of another man’s hand…

He had been divorced for six months now, amicably, from a wife who’d pretty much always known he was gay but had decided to let him figure it out for himself. Elspeth was a career woman whose need for a husband was seasonal, from the company picnic in July to the company Christmas party in December, with various client dinners in between.

He was twenty seven years old, and had engaged in sexual intercourse with one woman and two men. Intercourse was pretty much the word for it, he thought. It sounded less like passion and more like, well, cars merging on the freeway, and all three partners had been just about that exciting. (Actually less so, since on the freeway there was always the thrilling risk of death at the hands of someone who’d rather kill you than let you merge.)

Then one night, half drunk and inhibitions lowered, he’d thought, Fuck it, let’s hire a professional and see how it feels when it’s done right.

And he didn’t want it to feel... He didn’t want to feel like he’d got a burger in a fast food drive through. He wanted it to be special, if that was really possible with a paid companion and not just something that happened to teenage boys in Hollywood movies.

But even the upscale-looking ones, well, there was something about them that… He knew it was good business, to offer yourself up as “versatile,” and available for “mild to wild,” but… Well, the more he saw what he didn’t want, the more a picture began to form in his mind of what he did want. He didn’t want someone who looked like an investment banker but whose profile also said, “Hey I look classy but I can drop it if you just want a dirty pig fest and you’ve got the money for it.”

No. He wanted someone who was one thing. Who wasn’t whoever you wanted him to be. But who was what he said he was. Classy, for real. Not “up for anything.”

And then he found Harrison Dillon. 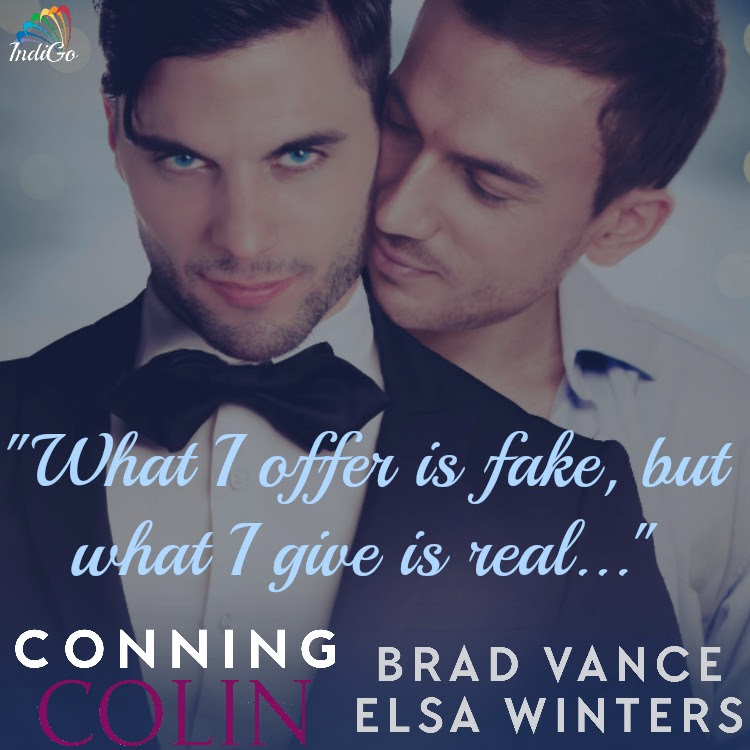 Why do you write?
Honestly, for both money and joy. I want, need, to make a living at this. I can’t stand the idea of ever going back to Cubicle City, of being on the clock, doing endlessly boring crap for idiots. Writing, creating in general, is what makes me feel alive. So I need to make money at it so I can keep doing it!

Which of your books was the most difficult to write?
I’d say A Little Too Broken because it was the most emotionally intense. Writing “angst” is something that I just can’t do anymore, at least since January 21st. The world is too dark for me to go into my magical creative world and come up with more darkness.

Give us an insight into your main character. What does he/she do that is so special?
Well, I wouldn’t want to spoil the surprise, but Henry is a person who’s sacrificing a lot for love. On the surface you might think he’s a high class escort because he loves the high life, but really, he’d rather be home with a pint of ice cream and binge White Collar again on Netflix. But he goes out there and he becomes this other person because it’s worth it to him, to make that sacrifice. I won’t spoil the surprise with more than that!

How much research do you do for your books?
Lots! For Werewolves of Brooklyn, for instance, I immersed myself in 1860s Manhattan, combed through Civil War history to find the right battle at which to place Albeus, my main character, and for the present day content, I lived on Google Maps, diagramming Brooklyn and finding the perfect house for the Werewolf King. I was luck with Conning Colin because I’d already started taking acting classes, and written my first screenplay, so what Colin and Henry were going through, I’d researched through experience.

Who designs your covers?
This cover is by Angstyg, and I love it. I told her that Henry is obsessed with Matt Bomer (and who isn’t) and she found a model who’s if not the spitting image of him, damn close! I love this cover.

Brad Vance writes romance stories and novels, including the breakout hits "A Little Too Broken" and "Given the Circumstances." Keep up with Brad at BradVanceAuthor.com, email him at BradVanceAuthor@gmail.com, and friend him on Facebook at facebook.com/brad.vance.10.