Welcome to the Riptide Publishing/L. A. Witt blog tour for Chief’s Mess, the third book in the Anchor Point series!

Every comment on this blog tour enters you in a drawing for a choice of two eBooks off my backlist (excluding Chief’s Mess) and a $10 Riptide Publishing store credit. Entries close at midnight, Eastern time, on June 24th, and winners will be announced on June 25th.  Contest is NOT restricted to U.S. entries. 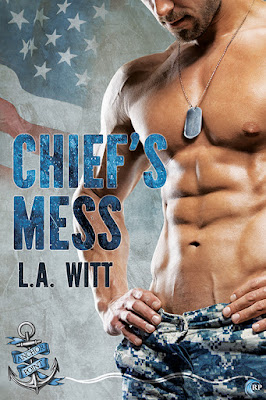 Anthony Talbot is in Anchor Point to visit family, but after two days of strife, he needs a break. A local gay bar is calling his name.

When Chief Noah Jackson sees that red head stroll into the club, he immediately wants him. They’re perfectly matched, and before long, they’re burning up the sheets. Noah can’t get enough. Anthony can’t stay in Oregon for long, but as soon as he leaves, he’s counting down the days until he can fly back for more. And between his increasingly frequent visits, there’s always phone sex, sexting, webcams . . . anything they can get.

But Noah’s got a carefully crafted façade, and Anthony can’t help noticing the slowly forming cracks. The scent of alcohol in the middle of the day. The extra drinks at dinner. The hint of red in his eyes. Anthony knows what it means. He doesn’t want to believe it, but he’s seen this before, and there’s no denying it. If Noah doesn’t get his downward spiral under control, he’s going to lose both his career and the first man he’s ever really loved.

After I’d gotten up, had a shower, and poured some coffee down my throat, I texted Anthony, Morning.

I squirmed beside the kitchen counter. LOL I’d rather fuck you.

I sighed as I picked up my coffee. In the days since Anthony had sent me that first text, we’d messaged almost constantly. Sometimes about nothing at all. Sometimes trying to get each other spun up at the worst possible times, like when Captain Rodriguez would be coming by my office soon or when Anthony had to go to a meeting with his boss. It had become a game, and as much as it was an exercise in sexual frustration, it did pass the time when the workday was slow.

Too bad you’re so far away, I wrote. Could meet you on your lunchbreak. You could be bitchy all morning & smiling all afternoon.

He didn’t answer right away, and I wondered if that had been too far. The mere fact that we were still texting after he’d gone back to Denver was skirting “too clingy” territory.

But then he replied: God. Please.

My coffee cup almost tumbled out of my hand. Oh yeah?

Yep. You do make an impression, amigo.

If I lived closer, I might have to do the same for you. You’re hot in your uniform.

I squirmed, suddenly imagining him on his knees, one hand on my blue digicam trousers, the other steadying my cock while he deep-throated me. Damn it, why didn’t we live closer?

You at work? he asked.

Why the fuck are you awake then? It’s an hour later here & I’m dragging. WTF?

I grumbled to myself as I wrote back, LOL Schedule’s weird. 7am = sleeping in.

Throughout the day, as I lounged in front of the television with my laptop on my knees, we kept right on texting. Around midafternoon, I replaced my coffee with some Jack on the rocks, and between Anthony and Jack, I had a serious buzz going before long.

I reached for my glass and took a long swallow. My head was spinning, but I doubted the alcohol had much to do with it. I hadn’t even had that much to drink. And, hell, I could’ve downed the whole bottle and it wouldn’t have screwed with my balance like those messages from Anthony. If I could’ve bottled what he did to me, I’d never need to set foot in a liquor store again. Shame he was so far away.

LOL That’s what you get for living in an actual city. Life in a Podunk place like Anchor Point did have its advantages. Traffic happened, but not as often or as badly.

Yeah yeah. Pause. You were distracting the fuck out of me today, BTW.

We don’t have to keep texting.

We better keep texting. There was a pause, and then he added, I’d jerk off in my office, but I don’t think I could stay quiet.

I’d pay to see that, I wrote back, hoping it didn’t sound corny. Especially you trying to stay quiet.

The response was not what I expected: You’re at home, right?

Do you have a webcam?

Oh dear God. I gulped as I repeated, Yes.

I get the feeling a webcam chat with you wouldn’t just be a chat.


Also in the series: 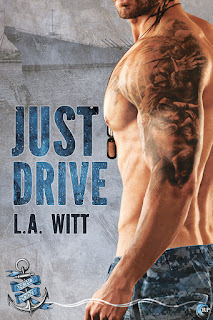 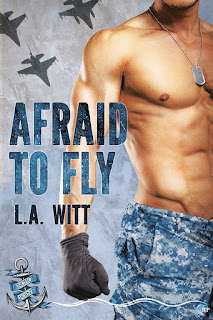 To celebrate the release of Chief’s Mess, one lucky winner will receive their choice of two eBooks off L. A. Witt’s backlist (excluding Chief’s Mess) and a $10 Riptide Publishing store credit! Leave a comment with your contact info to enter the contest. Entries close at midnight, Eastern time, on June 24, 2017. Contest is NOT restricted to U.S. entries. Thanks for following the tour, and don’t forget to leave your contact info!