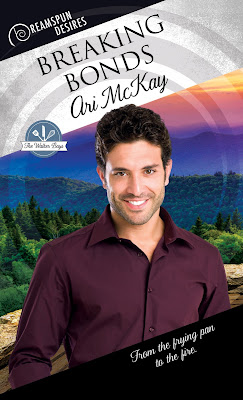 From the frying pan into the fire.

After a critic’s review attacks both Chef Liam Walker’s culinary skills and his personal life, Liam can no longer take the heat of the cutthroat New York City restaurant scene. He needs to get out of the kitchen—at least long enough to cool down and regroup.

At the Overlook Resort in North Carolina, Liam meets owner Carter Galloway. Carter has a passion for the hospitality business to rival Liam’s own, and it’s not hard to see where their shared interests—and attraction—could lead. But Carter has no interest in a fling, and Liam has no intention of walking away from the career he fought so hard for. If they want a taste of happiness together, they’ll have to find the courage to break the bonds threatening to pull them apart.

Greetings, everyone! Ari here again, and thanks to the lovely staff at My Fiction Nook for hosting us for the release of our latest Dreamspun Desires story, Breaking Bonds!

Have you ever had a dream? Of course you have! I won’t believe you if you say no. Liam and Carter, the MCs in Breaking Bonds, have dreams, too, dreams they’ve worked for over the course of years and sacrificed to achieve. But as Robbie Burns said about the best laid plans, they do often go awry

For Liam, it’s the dream of owning his own top-tier restaurant in New York City. He’s spent ten years working his way up the ladder from waiter to sous chef to executive chef at a Michelin-starred establishment owned by his mentor, Marco Cabrisi. He’s on the cusp of achieving all he’s desired, when his temper gets the best of him. After slugging a critic who disparaged him (and the critic really deserved it, even if Liam shouldn’t have done it), Marco orders him to take a vacation and find some perspective. Liam randomly picks a resort from a list given to him by a travel agent… and that lands him right in the middle of Carter Galloway’s dream.


Carter has had to fight even harder than Liam for what he wants, because it’s not only his ability and drive defining his circumstances, but the expectations of his parents. As an only child, his parents have placed all their hopes in him, which is definitely unfair, because what they want for him, and what Carter wants for himself, are vastly different. Carter loves them, but he wants to manage his resort, The Overlook, and spend his days making people happy rather than plodding along at his father’s law firm. In addition, he’s gay, and his parents aren’t at all pleased because they know the grandchildren then feel entitled to won’t be forthcoming. So Carter’s dream has careful boundaries that he is unwilling to cross -- which becomes a real problem when his dream begins to encompass the chemistry between he and his guest-turned-savior Liam Walker.

There lies the crux of the story -- Carter’s bonds to his parents, and Liam’s bonds to Marco. In this case, “bond” is synonymous with a sense of duty or obligation, and I’m sure we’re all familiar with just how difficult of a bond something like that is to break, no matter how much you want to do it. As to how they resolve their dilemma… well, you’ll have to read the story, won’t you? :D Seriously, I do hope you’ll consider giving it a try and see how you like it! I promise you won’t be disappointed!