Audiobook Review: The Deep of the Sound by Amy Lane 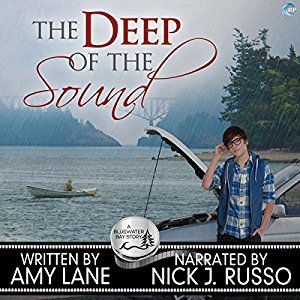 
Cal McCorkle has lived in Bluewater Bay his whole life. He works two jobs to support a brother with a laundry list of psychiatric diagnoses and a great uncle with Alzheimer’s, and his personal life amounts to impersonal hookups with his boss. He’s got no time, no ambition, and no hope. All he has is family, and they’re killing him one responsibility at a time.

Avery Kennedy left Los Angeles, his family, and his sleazy boyfriend to attend a Wolf’s Landing convention, and he has no plans to return. But when he finds himself broke and car-less in Bluewater Bay, he’s worried he’ll have to slink home with his tail between his legs. Then Cal McCorkle rides to his rescue, and his urge to run away dies a quick death.

Avery may seem helpless at first, but he can charm Cal’s fractious brother, so Cal can pretty much forgive him anything. Even being adorkable. And giving him hope. But Cal can only promise Avery “until we can’t”—and the cost of changing that to “until forever” might be too high, however much they both want it.

I have to admit for someone who was initially so resistant to the idea of audio books I've certainly done a 180 on that opinion...moral of the story...'never say never'.

'The Deep of the Sound' is the 8th book in Dreamspinner's 'Bluewater Bay' series and definitely one of my favorites in the series...no surprise there it's by Amy Lane and she's a favorite for me. While I happily read this one when it was released as an e-book in June of 2015 and I loved it 5 stars worth and yes, the review was long...I'm discovering that I've written more long reviews than I realized with this foray into the world of audio books. So here's the link to that original review, in an effort to keep this from becoming yet another long review....

Original Review: The Deep of the Sound

Narrated by Nick J. Russo one of my favorite narrators. I had zero doubt that I was going to enjoy this and happily I was right. While Amy Lane is an auto-buy for me when it comes to e-books, Nick Russo is becoming her equivalent when it comes to audio books. Mr. Russo's voices are solid and without fail he has the ability to draw me into a story effortlessly with his solid and consistent voices and his ability to help define a characters personality through their voice.

For me there were no surprises here one of my favorite authors teamed up with one of my favorite narrators to create yet another very enjoyable listening experience for fans of audio books, so needless to say my original rating of 5 stars remains unchanged and 'The Deep of the Sound' remains an incredibly enjoyable story whether it's reading or listening this one's definitely worthwhile.

An audiobook of 'The Deep of the Sound' was graciously provided by the publisher in exchange for an honest review.

Email ThisBlogThis!Share to TwitterShare to FacebookShare to Pinterest
Labels: 5-stars, audiobook, can be read as a standalone, comfort-healing, contemporary, dreamspinner, friendship, HFN/HEA, hurt/comfort, some steam & sex