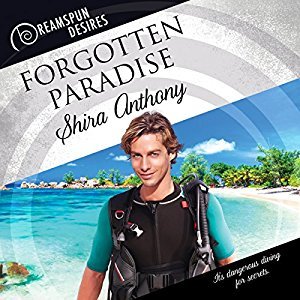 When a mega company threatens to take over his family-owned business, programming prodigy Adam Preston escapes the stress with a much-needed vacation in the Dominican Republic. There he meets attractive, intelligent, insightful Jonah James, a scuba dive instructor, and what starts as a holiday fling soon blossoms into much more.

But Jonah has a secret: ten years ago he woke up on an island beach with no idea how he got there… or even who he is. Their paradise may not be as perfect as it seems. When Jonah’s memories come crashing back like waves on the sand, will it be Adam clinging to the proverbial life raft, or will the two men find a safe harbor to ride out the storm?

Ok so I have to admit I was a little surprised when I realized this because truthfully I own more than a few books by this author and have somehow not managed to get to them yet...so many books, so little time...

"Forgotten Paradise" is part of Dreamspinner's Dreamspun Desires series and I enjoyed listening to the audio book. It was like being read a sweet, low angst fairytale...of the modern, adult variety, of course.

Adam Preston is enjoying a well earned vacation in the Dominican Republic before returning home to deal with what can only be considered a hostile takeover attempt by Entech a company with a reputation for less than ethical behavior in their business dealings, when he decides to do a bit of scuba diving he's surprised to discover that his instructor is the attractive, charming and somewhat mysterious Jonah, whom he met at the resort bar the night before.

It turns out that Jonah's not just a mystery to Adam but to himself as well. Since he only remembers the last 10 years of his life when he woke up on a beach one day with no idea of who he was or how he got there. He's held that secret close until Adam, who for some reason is causing long hidden memories to try and resurface in his mind.

As Adam and Jonah get to know each other during their time together, their attraction grows and with each encounter Jonah finds himself recovering parts of a past he thought gone forever and one that maybe he no longer wants.

It's a bit of a whirlwind romance between these two. Considering that they only have one week before Adam has to return to his real life. It works and I really didn't have a problem finding it believable...beautiful tropical setting, two intelligent, attractive, available people (men in this case) drawn to each other and who enjoy each others company.  Honestly no stretch of the imagination required here at all.

It's when Adam returns the real world that he begins to discover that his fantasy vacation was far more firmly rooted in reality than either he or Jonah could have ever imagined.

I enjoyed the first part of this story which introduced us to Adam and Jonah. Seeing their relationship go from a simple attraction to something so much stronger in spite of the fact that they knew they only had a week before Adam would be leaving.  It was fun and sexy and sweet and so easy the envision with the way that the author wove in the background information to create images of a beautiful tropical setting combined with the adventure of deep sea diving.

However, it's the second part of this book that really won me over. Seeing Adam as he came to the realization of who Jonah was while also struggling to save his company and pull his family back together. More than the company that his father started Adam valued his family and while his relationship with his mother and his sister is fairly solid (his awesome sister, Karen...just sayin' with a name like that how could she not be awesome?), it's his brother Rodger whom he misses. They use to be best friends able to talk to each other about everything. But since their father's death that's changed and Adam wants to fix this. He's willing to do just about anything to have his friend and brother back.

Ironically when Adam's vacation ends he's not the only one who needs to return to real world. As Jonah comes to remember his life before waking up on a sandy beach he also comes to the realization that he can no longer hide from who and what he was. He needs to return to the life he's only now remembering and put his own house in order.

While the first half of the book gave me a glimpse into the character of Adam and Jonah and what kind of men they are, it's the second half that really develops them and gives them depth. There are no cake walks here, both men have to fight for what they want. Proving that determination and strength of character is not in short supply where either of them are concerned.

"Forgotten Paradise" was narrated by Andrew McFerrin, who is a new to me narrator and while I have to admit I didn't fall head over heels in love with him. His voices were consistent and expressed emotion. While I can't say that any one voice was outstanding or hooked me into the story as I've had happen with other narrators. I wasn't put off by any of them either and I'm definitely willing to listen to future audiobooks by this narrator...I may even have a couple on my wishlist over at audible...the samples sound good so definite potential here for me.

When all is said and done it's 4 stars for the story and 3 for the audio portion and I'm just going to call it a day at 4 because if I take the median number as I usually do it's 3.5 and I'm just going to have to round up when I post this review in other places and I'm feeling lazy today plus truly this story deserves more than 3 stars so I'm not willing to round down...so 4 stars and I'm done here now.

An audio book of "Forgotten Paradise" was graciously provided by the publisher in exchange for an honest review.

Buylinks are provided as a courtesy and do not constitute and an endorsement of or affiliation with this book, author or booksellers listed.