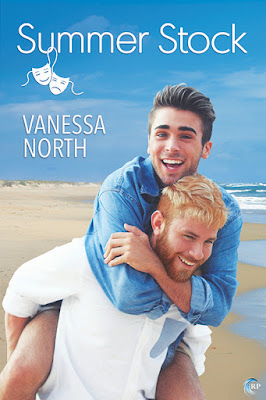 Tabloid scandals have driven TV star Ryan Hertzog to North Carolina’s Outer Banks, where he’s hiding out doing summer stock at his cousin’s seaside theater. When a hookup with local handyman Trey Donovan results in Ryan being photographed butt naked, he vows to keep his pants on and his hands off Trey. How was he supposed to know Trey would turn out to be the summer stock set builder?

Trey isn’t looking for a relationship; he’s still recovering from the emotional fallout of an abusive marriage. But Ryan’s laughter draws him in again and again, and he’s not about to say no to fooling around.

As the summer heats up, the paparazzi catch Ryan in increasingly compromising situations. Ryan might be too much drama for a summer fling—and Trey might be just an intermission from Ryan’s Hollywood life. But if they take their cues from Shakespeare, all’s well that ends well.

1. What inspired this book?
Summer Stock was inspired by my love for live theater, especially summer Shakespeare festivals. Last year, before the RT convention in Vegas, my friend Cherie Nicholls and I started brainstorming some of the ways I could translate that love of live theater into a book or even series. Between my love for theater, my love for small town contemporary romances, and a few nods to Shakespeare in the plot, it all sort of unfolded from there.

2. Have you ever done Summer Stock yourself? If so, please elaborate.
I’ve not performed in a professional theater company, but I did lots and lots of theater in high school and college. I did some Shakespeare—Puck in A Midsummer Night’s Dream and Lady Capulet in Romeo and Juliet, but my favorite part ever was playing the Fury Megeara in the Greek tragedy Thyestes. I basically stalked around the stage being horrifying, and it was more fun than should be legal.

3. Ferdy is obviously modeled after Hank. Tell us about Hank, and your new puppy.
Hank was absolutely the most wonderful dog I’ve ever had the pleasure of knowing. We got him as an 8 week old puppy, and he was already 25 lbs. A few months later, I found out I was pregnant (with twins!) and they were due on his birthday. He was gentle, sweet-natured, and always slept in the funniest positions, either on a mattress in his crate or on our sofa, with one or both of the twins piled on top. He passed away in February, and we miss him terribly. While we wait for the right dog for our family to come along, we’ve been enjoying occasionally dogsitting my friend Becca’s  goldendoodle, Boog.

4. Both Ali and West defy the stereotypes - thank you for that. Who inspired these characters?
West was initially somewhat based on all those old school film actors who were rumored to be gay or bi but stayed closeted because of their careers—he’s sort of the next generation: a child actor who decided to become a filmmaker instead of pursuing a career as an adult actor. He’s openly bisexual and comfortable playing Hollywood power games.
Ali, on the other hand, is almost entirely the opposite. She’s talented and beautiful, but she went to Hollywood in her late teens, much like Ryan. Unlike West, and to a lesser extent, Ryan, she’s very naïve and soft-hearted, and she struggles a lot with the expectations placed on young women in Hollywood. In addition to that, her love affair with West, a much older man, became sort of all-consuming at a time when she didn’t really know what she wanted for herself—much less how to share a life with someone else.

5. Which is your favorite Shakespeare play?
I love the comedies—Shakespeare’s humor is sly and full of innuendo and the stories are so much fun. I think if I had to pick a favorite, it would be either Twelfth Night or Much Ado About Nothing. Each is charming for its own reasons, but those two are probably the ones I enjoy the most, either to read or to see performed.

6. Ryan is bisexual, and Trey struggles with that, and subsequently puts his foot in his mouth a few times. What do you want to tell readers who might think like Trey?

I think Ryan pretty much embodies a lot of my own feelings about my bisexuality, and a lot of his experiences with the other characters in this book mirror my own as far as coming out and having to repeatedly educate friends and family and even partners about what that means. I think there are a lot of stereotypes that Ryan was constantly butting up against in his friendships and relationships, and that’s very much how I feel at times. Reading between the lines of Ryan’s dialogue would give you pretty much my exact feelings.

7. Trey is still recovering from the abuse he suffered at the hands of his ex-husband. What kind of research did you conduct in dealing with past abuse? What kind of insights did you want to convey by including this topic?
A lot of domestic abuse between same-sex couples goes unacknowledged, and I think primarily, I wanted to address that it does happen—but to also show that therapy and medication can help. As for research, I ended up doing a surprising amount of research on prison sentencing in the state of North Carolina. I also brought in some of my own experiences with therapy for PTSD.

8. Do you have any additional books planned that take place in this universe? What are the chances for a sequel?
I would love to write David’s story. He’s sort of flirtatious and cheeky, but I think he has his reasons why he looks for “uncomplicated” sexual relationships. I’m very tempted to give him a relationship that starts out no-strings attached and gets really super complicated before he realizes how deep he’s gotten.

9. What fabulous book are you working on now? What can we look forward to?
Right now I am working on Off Limits, an F/F novel about an androgynous bisexual punk singer and a pansexual socialite in Riptide’s forthcoming Rose and Thorns Social Club series. Next up after that is a New Adult M/M retelling of Emma set in a fraternity house. And at some point this year, I hope to finally release Save Tonight, a story about a man who marries both of his high school sweethearts, twenty years apart. 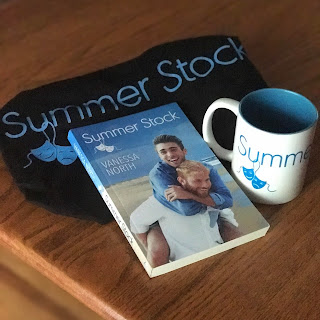 To celebrate the release of Summer Stock, one lucky winner will receive a Summer Stock swag bag! Leave a comment with your contact info to enter the contest. Entries close at midnight, Eastern time, on May 20, 2017. Contest is NOT restricted to U.S. entries. Thanks for following the tour, and don’t forget to leave your contact info!