Blogtour: The Simplicity of Being Normal by James Stryker

Sam has his life after graduation figured out. Until then he has to deal with being terrorized for expressing his gender identity. His pleas for help have been ignored by the principal and most of the staff, and his time is spent moving quickly between classrooms and anticipating the freedom that will come with leaving high school behind.

Teacher Todd Keegan, at first, wonders if Amanda is on drugs and if he's underestimated her maturity. Between enabling his traumatized, dependent sister and hiding secrets of his own, Todd has no desire to waste time on a junkie teenager, but this one intrigues him. When Amanda shows up in his classroom, bleeding from a head wound, he decides to investigate further.

In order to survive senior year, Sam must convince Mr. Keegan that he’s not a junkie teenager and decide if, unlike his family and school staff, this teacher can be trusted with the truth and become his only ally.

The Simplicity of Being Normal
James Stryker © 2017
All Rights Reserved

“Amanda Michelle! I won’t tolerate that mouth of yours a second longer! Get out!”

“Or what? You’ll hit me? Repeat performance sixteen years later. Go ahead!”

If there was one positive thing to be said of his mother, it was that she avoided violence. While her own mother had often resorted to physical punishment, Scarlet had never put a hand on Stevie. And she’d only hit Sam once, which was how she learned her lesson.

“Amanda was maybe one. Barely walking. I can’t remember what she did, but I hit her so hard that she flew across the room. That’s when I decided to keep my temper in check. I just send them away when I’m angry now.”

Scarlet told this story often when child discipline surfaced in adult conversation. She was proud of herself. Proud that it only took one incident of hitting a toddler with enough force to knock her across the room to realize that violence wasn’t a good idea. She never understood why she received strange looks when she finished this charming anecdote of her parental prowess.

Because you should be ashamed that you struck an innocent baby. That you hurt your child, Sam would think when Scarlet retold it and people gave him the confused looks he often received when his mother opened her mouth. You should want to bury that secret instead of continuing to get off on it more than a decade later. The last thing you should feel is pride.

But sometimes he’d rather have a slap to the face than the emotional abuse Scarlet dealt. Bruises healed. The damage from seventeen years of being blamed for every negative circumstance? The constant feeling of rejection? The thousands of times when something or someone else was of more importance than him? His father. Stevie. The boyfriends. Work. The fucking Golden Girls.

“Oh, I’m going.” He lowered his voice and took a step into the hall. “But so should you. That’s all I came to tell you. You should check into a hotel for a few days. It’s not sanitary. And that’s not even my opinion—it’s the disaster crew’s recommendation. You could get sick.”

“This is my house, young lady. I won’t be told what to do by you or anyone else.”

It was the most below-the-belt thing he could be called, and his skin was smoldering. Sam didn’t believe he was capable of laying a hand to anyone, especially a woman. But he needed to leave now before he said something he’d regret. Like yelling in her face at the top of his lungs. Like using every profane word he could think of until her ears bled. Like divulging his secret when she had some power over him.

“As long as it’s out of my sight, I don’t care where you go.” She’d turned away from him again. “But Stevie and I are staying here. I’m not paying for a hotel room because the basement is dirty.”

“You know what else lives in their own shit? Pigs. It’s too bad Gary’s condo doesn’t allow farm animals, or you could stay with him.”

Scarlet spun around and slammed the door in his face without another word. 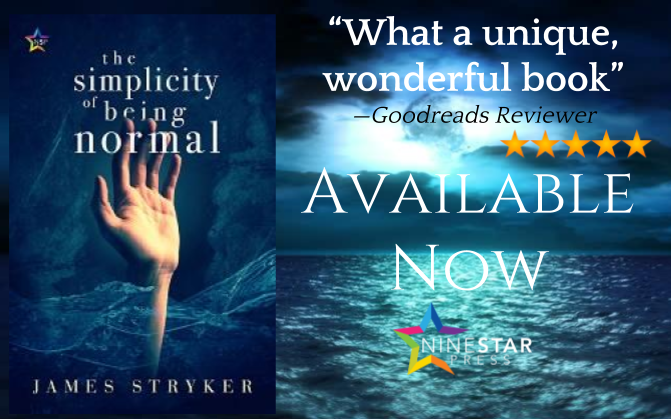 Interview with the author

The Simplicity of Being Normal is my first attempt with a YA book, and looks at another angle of the transgender experience. The book’s main character, Sam, is a seventeen-year-old struggling to express his gender identity in an extremely conservative environment. Unfortunately, like many transgender individuals, he has to balance publicly embracing his true self with vicious bullying and an abusive family. Even as he thinks he may have discovered an ally in his teacher, Todd Keegan, the escalating violence threatens to end his life before he can really even start it after graduation.

Similar to my first two novels, Simplicity is told from three different points of view and readers can expect the literary/character-driven tone with plenty of grit and my usual predilection for the “f” word.

I am notorious with titles. Right up until querying the manuscript, Simplicity went under the name Superman VI and all my drafts have that title. There’s no symbolism in either part – it was referencing my usual difficulty in naming novels and a Family Guy sketch. Before sending the book to agents/publishers, my wife pointed out that I couldn’t seriously call a book that has nothing to do with Superman, Superman VI. I couldn’t cobble together a way to make it fit despite my best efforts, and I agreed to one of her suggestions, The Simplicity of Being Normal. So, I can’t take credit for the title – Jayme is amazing and keeps me from calling my books some awful stuff (though I still refer to it as Superman VI in my head.)

I’d like to see readers walk away from Simplicity with a couple of different things – a view of the transgender experience that I feel is often under-represented, and a better understanding of individuals coping with the aftermath of trauma.

At some point, I actually think everyone, regardless of gender identity/sexual orientation, has the wish for simple acceptance – to not be extraordinary, but to just be. While Sam’s quest for normalcy is a goal shared by many, too often transgender stereotypes become a main focus. In Simplicity, Sam isn’t transitioning for attention or to prey on people in restrooms. In his words, “I just want to be free.” By reading his story, I hope a reader who may have never walked his path will find him relatable and leverage his experience with narrow LGBT views that tend to get a lot of hype.

From Sam’s emotional trauma to Julie’s physical and sexual trauma, I wanted Simplicity to take a look at how individuals with deeply scarred pasts attempt to move forward with their lives. As a person who has struggled with PTSD, it’s a challenge when others are unable to understand that “safety now” doesn’t erase prior events, or in many cases, alter the paths that led to those events. Simplicity isn’t a book of heroes who easily overcome horrors they’ve experienced – characters try to cope as best they can, often falling into destructive patterns and the same pitfalls. If Sam or Julie can cause a reader to reflect more thoughtfully on someone they know, or themselves, I’d be a very happy writer!

Once I have an idea plotted a third of the way through, typing it out in “panster” fashion doesn’t usually take me very long. I can complete a first draft in a couple of weeks, before I then set the manuscript aside for as long as I can stand it. Aside from “listening” to one’s book, taking a break before editing is a piece of advice I can’t give enough importance to – gives a fresh look and makes it a ton easier to cut irrelevant content. Only after two or three rounds of this editing does the manuscript finally resemble something that I could pass to a professional, though admittedly it will always have its fair share of comma splices…

I have a habit of touching the computer screen when I’m trying to figure out how to work/reword something, as if the words are written on Scrabble tiles to arrange. My screen is usually a mess of smudges… but it keeps people from wanting to use my computer.

I wrote what may be the most God-awful, self-indulgent book when I was still in high school. It was over five hundred, single-spaced pages – an amalgamation of crap which made no sense. The monstrosity will never see print; however, I keep it because I did finish it. Completing a novel (even a garbage one) is an achievement at any age.
The first serious book I wrote, Assimilation, I completed when I was 26. It was published last year by Pan Macmillan, so I made it into the under-30 club!