Of all people, I am the most surprised to find that I’m known for contemporary romance. When I was growing up, I read mostly fantasy—I thought that was my destiny, right? In fact, when it was time to choose a pen name, I almost didn’t. My married name is a “Mc” name—and I wondered if I, too, could go up on the library shelves next to the “Magnificent Macs”—McKinley, McKillip, and McCaffrey.

I was going to write fantasy.

And when the urban fantasy boom started way back in the early 2000’s, I was so on board. I started writing Vulnerable in 2001—about two months before Charlaine Harris hit the waves with Sookie Stackhouse, as it turned out. The book was finally published 18 months before Twilight came out—something I am prickly and defensive about to this day.

I was going to write fantasy.

That 750 word short for Gambling Men came as quite a surprise. So did the following shorts, and the story Shirt, and then If I Must—oh wow. Writing contemporary gay romance was so much fun!

And it still is—there are still a thousand things I want to research, a zillion careers, situations, people I want to explore.

But still—I was going to write fantasy.

And it’s funny—people assume I want to write fantasy because it’s easier than contemporary, but nothing could be further from the truth.  Writing fantasy is harder—much harder. But that doesn’t mean there aren’t some similarities.

So let’s compare—what are the differences and similarities between writing fantasy and contemporary:

Fantasy—Is much much harder. Critics get very blithe and condescending about how an author can just “make up” her own world for fantasy, with its own rules, but the fact is, if the fantasy world doesn’t have consistency and some sort of organic component that is relatable to the audience, people won’t buy it. And worse still, craft will suffer—the plots and the world will become so convoluted and complicated that not even the author can follow what they’ve done. So building a consistent world—in every aspect from food to magic to restrictions to government—is a complicated, exacting job. Even in urban fantasy, the magic has to have rules—and if those rules are violated without explanation, readers get VERY upset. If you’re introducing different species—vampires, elves, werecreatures, demons—those creatures have to live with their own limitations and gifts, and if they interact, there needs to be the same level of synergy that you find in a zoo habitat—they have to have ways to get along.

Contemporary—Much easier. But not, as some people assume, non-existent.  Any fictional world—even one that is built in your hometown, on your block, is going to have rules. Is this the sort of world where odd things happen?  Are there coincidences in this world? Can people fall in love at first sight in this world? Is there such a thing as soul mates, or is love a smaller, practical, more incremental thing? My contemporary romance is gay romance—how deeply am I going to address the social issues? How much will the scars of the past affect my characters? When I determine the tone—light or heavy—of my contemporary romance, I am, in part, determining the world my characters exist in. If I’m writing one kind of world, Xander and Christian fight the horrible homophobic coach and go on to win the tournament! If I’m writing a completely different world, well, you all know what happens.  Those moments, those decisions for character interaction—they all boil down to world building. What kind of world do these characters live in? Even if it’s supposedly the same world I live in, that doesn’t mean the same rules apply.

Which brings us to character—what are some of the differences in writing character in fantasy versus contemporary?

Fantasy—People assume that fantasy isn’t about character at all—and some fantasy writers assume this as well. But the truth is, if the characters in a fantasy novel aren’t sympathetic, half the audience isn’t going to give a crap about the exacting details of the world building.

Well, some people will argue, it’s not like you’re writing people.

And that would be wrong. We are writing people—whether they’re vampire, shapeshifter, angel, demon, sorceress, or fay, a fantasy writer needs to be writing believable human characters. Even if, say, you’re writing vampires who appear to have very inhuman drives, if you want this vampire to be an ally or a friend or a lover, he or she needs to have a core of something very sympathetic—very human, or the reader will want to stake that asshole herself.

In fact, I’d go so far to say that all of the details could be complete and perfect with godlike accuracy, but if there isn’t some resonating core of humanity in the people living in this world, nobody is going to believe their real—not even for pretend.

Contemporary—Well, people assume that contemporary romance is all about character, and to some extent, yes. A lot of really successful romance is two humans, working shit out. And if those characters aren’t fully imagined, are too perfect, or have no redeeming characteristics whatsoever, that’s a lot of empty words on page.
However, not every reader is just content with the two guys working shit out—some readers need some more external complications, and this is where the contemporary writer needs to decide—again—what this world is going to be. Are the external complications going to get a front seat sometimes? Is this going to have a mystery or adventure component? For some reader, that’s sacrificing character for plot. For some readers, that’s saving the characters from talking too much about their feelings—and for the writer, it comes down to personal choice. What does the writer want from that romance?

Either way—it’s a fine tightrope to walk, and writers need to take a stand or their book is going to lose coherence—so really, it’s not as easy as it seems.

Which brings us to plot—


Fantasy—in a fantasy novel, plot is allowed to take over. In fact, plot can even overshadow certain trope expectations. For example, in an urban contemporary fantasy, a romantic hero can be sacrificed at the end of the book without the book violating the genre rules people come to expect. Why no—I’m not talking about any book in particular (Vulnerable) or any vampire specifically (Adrian) or anything people have held against me for the last twelve years, why do you ask?

And for anybody who says it’s easier to write that happy ever after, they haven’t taken a look around a frightening world peopled by idiots in power who keep trying to kill off their citizenry and said, “Hey—I’m going to hope against hope that two people can hold hands, close their eyes, kiss, and make the future better.”  It takes hope, faith, bravery, and a stalwart heart to write a happy ever after that people can believe in—so in that respect, I’m going to give points to contemporary for daring to believe in the happy ever after, and more power to it.

Well, it all comes down to the story I wanted to tell.

For Quickening—and ALL the Little Goddess stories, I really wanted to tell the story of a world in which magic dwelt around every corner. I personally am sort of a dreamy, unfocused person, often listening to magic drums that have never been beat on earth. I honestly expect odd things to happen every day—the separation between the real world and the fantasy world is made of transparent gauze that gets blown aside when a fly buzzes through the room.

I wanted to write a world where say, having sprites that clean your bathroom without your even having to ask—is just as likely as getting stuck behind a truckload of fluffy Alaskan husky dogs, panting in the wind.

I got stuck behind that truck yesterday—it was wonderful.

I fully expect those critters to clean my bathroom any minute now.

That’s the world I wanted for my characters.

And yes—it was difficult and frustrating and mind-boggling to create.

And I loved every minute of it. I’d love to do it again. 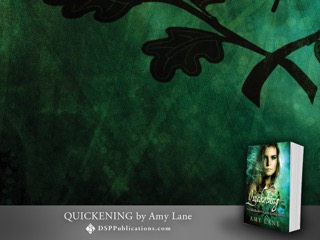 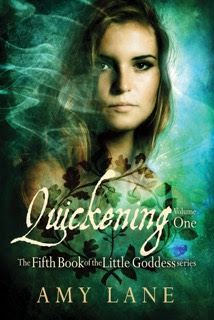 Cory thought she’d found balance on Green's hill—sorceress, student, queen of the vampires, wife to three men—she had it down! But establishing her right to risk herself with Green and Bracken had more than one consequence, and now she’s facing the world's scariest job title: mother.

But getting the news that she’s knocked up takes a backseat when a half-elf hunts them down for help. Her arrival brings news that the werewolf threat, which has been haunting them for over a year, has finally arrived on their doorstep—and it’s bigger and more frightening than they’d ever imagined.

Cory throws herself into this new battle with everything she’s got—and her men let her do it. Because they all know that whether they defeat this enemy now or later, the thing she's most afraid of is arriving on a set schedule, and not even Cory can avoid it. The trick is getting her to acknowledge she's pregnant before she gives birth—or kills herself in denial.

You can buy the first book in this series, Vulnerable, here and here.

Amy Lane has two kids in college, two gradeschoolers in soccer, two cats, and two Chi-who-whats at large. She lives in a crumbling crapmansion with most of the children and a bemused spouse. She also has too damned much yarn, a penchant for action adventure movies, and a need to know that somewhere in all the pain is a story of Wuv, Twu Wuv, which she continues to believe in to this day! She writes fantasy, urban fantasy, and m/m romance--and if you accidentally make eye contact, she'll bore you to tears with why those three genres go together. She'll also tell you that sacrifices, large and small, are worth the urge to write.