Blogtour: Past The Breakers by Lucie Archer 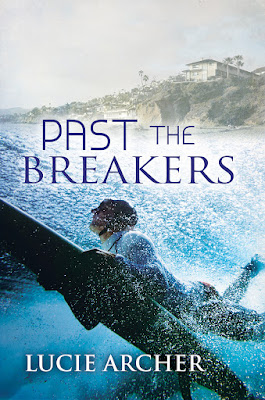 Casey North lost everything when his restaurant burned to the ground: his hopes, his dreams, his reason for living. With nothing tying him to LA, he packs up and moves back to his hometown of Land’s End. He takes up residence in a beach house and attempts to shake the depression he’s fallen into after his life collapsed. There’s just one tiny problem: the ghost haunting his kitchen.

Myles Taylor wasn’t always trapped in the Between. One minute, he was about to propose to his boyfriend of five years as they sat out on their surfboards, and the next, he woke up on the beach to find his long-dead uncle walking toward him. After his shock fades, he must learn to navigate his new reality as he searches for a way to move into the Great Beyond. But first he must deal with the man who’s invaded his territory.

With Myles tied to the beach house and Casey unwilling to leave it, the two must learn to cohabitate as the lines separating them begin to blur. They grow closer than either expected, but what will become of them once Myles finally escapes the Between?

Hello everyone, and thanks for joining me as I continue my blog tour for Past the Breakers! While Casey and Myles are the main characters of the book, I thought I’d devote today’s post to the third resident of the haunted beach house, Jasper the cat. Enjoy!

Hi there. For those who don’t know me, I’m Jasper the cat. My human, Casey North, uprooted me a few months ago and brought me to this strange new house that I knew from the start was occupied by someone—or something—else. But as much as I tried to warn him, my human refused to listen. To avoid the same thing happening to other cats in the neighborhood, I want to offer up some tips on how to chase off those pesky, unwanted houseguests.

Step 1: Locate the spirit in question.

Kind of self-explanatory, but sometimes ghosts will hide behind closed bedroom doors or other places you need opposable thumbs to access. If this happens, you just have to wait for them to find you. And they will because even the dead can’t resist us cats.

Just like humans, ghost humans are terrified of cat growls. They may pretend we’re harmless little wimps, but on the inside—do ghosts have insides?—you’ll have them quaking in their coffin. This might prove more effect if you growl at them from under the bed or inside a cabinet, but feel free to experiment and do whatever works best for you.

Step 2 & 3 go paw-in-paw because you want to let them know you aren’t playing around. Increasing your size is also a good defense mechanism if they try to get too close. But be careful. Some ghosts will try to pet you at this time thinking they can get away with unwanted strokes of your lustrous coat just because they feel no pain.


This can be particularly useful if the ghost tries to pet you. Don’t worry if they’re noncorporal since swatting still might give them a fright even if you don’t make contact. It also offers a great distraction for you to flee if you need to take a break. Interacting with the dead can be exhausting and always makes me hungry. (Tip: make sure to stay hydrated.)

If growling doesn’t chase them off, try adding a hiss or two. In combination with swatting and puffing up like a marshmallow, you should have them running scared in no time. If not, see next step.

Step 5: Know when to admit defeat.

If these steps don’t rid your house of the ghost haunting your territory, you might need to consult a professional… or worse, your human. But sometimes it’s best to find a way to co-exist. Most spirits are harmless and won’t bother you except in cases of extreme boredom.

And just for the record, if you ever do find your self face-to-whiskers with a ghost, there is nothing wrong with ducking behind your human’s legs as you offer them up in sacrifice. 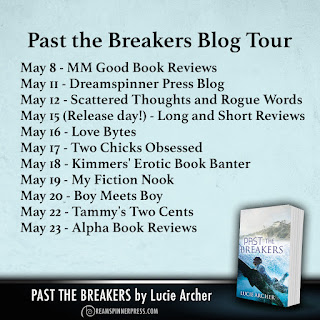 Lucie Archer is a student of the universe who is obsessed with the stars, in love with beaches, and crazy about dudes falling in love. She tells stories of romance, love, and life, with a little bit of passion thrown in for good measure. Because what’s life without a little pop and sizzle?

When she’s not writing, she can be found tending to her garden, playing with her four-legged children, or procrastinating. Although, she spends a lot of time fending off random plot bunnies that threaten to derail her WIP’s.