Hello world and internet! I’m SA Stovall and I’m blog-touring my latest novella, The Dusk Parlor, a contemporary romance set in Japan as part of Dreamspinner Press’ ‘World of Love’ novella series. Feel free to follow along as I post articles, sneak peeks, and share a little bit of my love for Japan (April 27th to May 9th)! I hope you all enjoy!

One of the most interesting things I discovered when I was in Japan was the work ethic. No matter the position, be it CEO or cashier, everyone took their job seriously and held themselves to high standards. Convenient stores connected to gas stations would have door greeters. Tipping is frowned upon—most will take it as an insult—because (as one man told me) they should always be doing their best to serve the customer.

And no one touches money. They have trays they use to hand out the receipts and take the cash. I got looked at weird when I tried to hand someone a couple of bills at a book store, and I’ll never forget my friend laughing at me like I was a barbarian.

These cultural differences helped me write The Dusk Parlor—Hugh, the main character, is an American who moves to Japan and needs to find a job. He gets hired at a fancy nightclub, and his new boss doesn’t think his “uncouth American ways” are suited for his establishment. Which only makes Hugh want to prove him wrong. 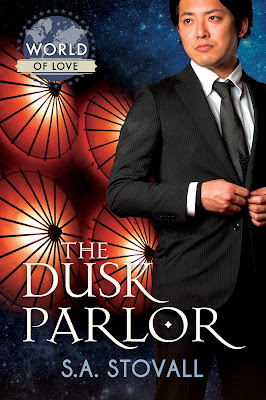 Former soldier Hugh Harris is a “hāfu”—half-Japanese, half-American—and, after his father’s death, he returns to Kobe, Japan, in order to connect with his mother and her family. Confused and feeling out of place, Hugh finds work as a waiter at an upscale nightclub. The other employees, an odd and eclectic bunch, quickly make him feel at home, especially the bartender, Ren, and the club host, Kaito.

But the tranquility doesn’t last forever. As Hugh gets deeper into his relationships with both men, he finds they may have dubious connections with the yakuza in town… and when the local street leaders send their enforcers to the Dusk Parlor, Hugh, Ren, and Kaito may be in for a storm of trouble.

“Hugh. Pay attention. All bills are calculated here at this computer.”
I watch Kaito type in the amounts, and I cringe when the hypothetical total for my practice table comes to 700,000 yen. It’s an outrageous sum of money for a few drinks. I want to ask about the clientele, but I suspect I’ll find out soon enough.
I glance at the clock. Six. The doors open at seven.
I straighten my uniform and grow redder with each passing moment. The sack coat, vest, and trousers are some of the highest quality clothing I’ve ever worn. It fits me perfectly—much to my surprise—and when I catch myself in the reflection of the bar mirror, I know I look good.
Ren “fixed” my hair to look more “American.” It’s lighter now than it was before, and disheveled. He says patrons expect Americans to be gruff and wild, even in a professional setting. I don’t bother to correct him and instead play to their expectations.
“Are you paying attention?”
I turn back to Kaito and nod. “Yes. I use the computer.”
“Hmpf.”
He returns his attention to the screen.
The front door opens, and I get tense. Customers? No. The red-haired waitress from the night before.
She enters with a smile that brightens even the darkest of corners. “Good evening, Hanamura! Tonight I need—” She stops herself short the moment she catches sight of me. For an awkward second she mouth-fishes for a response, only to turn up empty-handed. “Uh….”
“I’m Hugh,” I say with a bow of my head. “I’ll be working as a waiter tonight.”
“I’m Lottie,” she replies once she regains her words.
“Nice to meet you.”
“Yeah….”
She offers me a one-sided smile and scuttles around the bar, keeping an arm’s length between us at all times, her eyes glued to mine. Lottie disappears into the back, no doubt to change, and I stare at the door with a bemused expression etched into my face.
What was that about?
“You will be shadowing Lottie tonight,” Kaito says. “I expect you to learn from her over the weekend. Hopefully, by Sunday night, you will know the basics.”
“Of course.”
He straightens his glasses and sneers. “Of course? You think this will be easy?”
“I can wait tables.”
“We will see.”
God, I hate his patronizing attitude. I hold back commenting, but my face must betray my anger because Kaito matches it in kind. I step around him, heading for the kitchen, and he jumps back, hitting the bar in his haste to move. I stop and stare, which only causes him to grow red. He averts his gaze and motions me away with a wave of his hand.
“Go,” he commands, his voice unsteady.
He’s a little tense—did he think I was going to do something? I don’t know and I don’t ask. Turning away, I continue into the kitchen. To my surprise, Lottie has already changed and walks out of the employee lounge. She spots me and stops, the look of a frightened animal caught in the headlights plain on her face.
“Kaito says I’m to shadow you tonight,” I say, trying to sound relaxed, but my voice echoes with an odd timbre, like I’m lying. She frowns. I take a quick breath and continue, “I’m from the United States. Are you… from around here?”
“I’m from Ipswich,” she states in English as she ties her hair.
“In the UK?”
“Yeah. You know it?”
“I went there once.”
Lottie’s anxiety visibly dissipates. She forces a smile, and I take note of her interesting outfit. It’s a flapper dress—not exactly Gilded Age America—but I imagine it’s fun to wear and not many patrons in Japan would know the exact date of popularity. Lottie has only a handful of freckles, and they span the bridge of her nose and upper cheeks. I’d say she’s Irish, but she doesn’t have a heavy accent, not even a British one.
“You don’t have any tattoos, right?” Lottie asks, taking a step close and examining me with squinted eyes.
“Tattoos?”
“Yeah. Do you have them?”


“No….”
She lets out a sigh of relief. I chuckle.
“What does it matter if I have any tattoos? My clothes cover me from my feet to the top of my neck.”
Lottie closes the distance between us and shrugs. “You must be new to Kobe. All the gangster thugs here tattoo themselves. Everyone knows it. I thought… given your size… that you were part of them, but you seem too polite for that.”
I lift an eyebrow. She shakes her head.
“Sorry,” Lottie says. “I shouldn’t have said anything. It’s not appropriate to make assumptions. You seem nice so far.”
“So you’ll help me learn the ropes?”
“Yeah.”
“Good,” I grunt. “I need to show up Kaito and prove to him I can handle the job.”
Lottie covers her mouth as she giggles. “Oh, don’t worry about Hanamura. His standards are high, but he’s a good guy. He won’t fire you unless he thinks you’re irredeemable. Or you steal. And don’t think you can get away with stealing, either—Hanamura notices everything.”
“Is that why you guys are short-staffed?”
“Yup. Two guys thought they had the perfect plan, but Hanamura’s no fool.”
I stand a little straighter and narrow my eyes. “I’ve never stolen anything in my life, and I don’t intend to start now.”
Lottie fluffs her long red hair and nods in agreement. “I believe you. So, you ready to get to work? You might have to remember a lot.”
“I’m ready.”