ARC Review: Road to the Sun by Keira Andrews 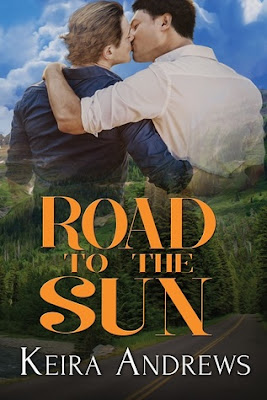 Jason Kellerman’s life revolves around his eight-year-old daughter. Teenage curiosity with his best friend led to Maggie’s birth, her mother tragically dying soon after. Insistent on raising his daughter himself, he was disowned by his wealthy family and has worked tirelessly to support Maggie—even bringing her west on a dream vacation. Only twenty-five, Jason hasn’t had time to even think about romance. So the last thing he expects is to question his sexuality after meeting an undeniably attractive park ranger.

Ben Hettler’s stuck. He loves working in the wild under Montana’s big sky, but at forty-one, his love life is non-existent, his ex-boyfriend just married and adopted, and Ben’s own dream of fatherhood feels impossibly out of reach. He’s attracted to Jason, but what’s the point? Besides the age difference and skittish Jason’s lack of experience, they live thousands of miles apart. Ben wants more than a meaningless fling.

Then a hunted criminal takes Maggie hostage, throwing Jason and Ben together in a desperate and dangerous search through endless miles of mountain forest. If they rescue Maggie against all odds, can they build a new family together and find a place to call home?

This isn't a typical romance, but Keira Andrews doesn't do typical; she has a wide range and writes with equal ease about the gay Amish as she does about the zombie apocalypse.

What begins as a tale of two men—Ben, a lonely 41-year-old ranger, and Jason, a timid 25-year-old single father, meeting and tentatively forming a friendship—turns into a scary, heart-pounding adventure when Jason's 8-year-old daughter Maggie is abducted by a killer hiding in the wilderness.

That sounds très dramatique, but the plot arc is incredibly well done. Andrews shows us a father's desperate grief and the overwhelming guilt Ben feels over leading Jason and Maggie on a hike so far away from the campgrounds. We are not told how the characters feel; we experience it with them.

I was worried each man would blame the other, but that didn't happen. They frantically search for Maggie and then deal with the aftermath in the only way they know how.


While Ben forms a strong attachment to Jason and really believes they could have a future, Jason is terrified. Jason is all about the routine. He doesn't like change. Maggie has always been his whole world. Jason isn't Jason, a sexual being, a man with his own interests who pursues romance; Jason is Maggie's dad. Period.

Maggie is an adorable, precocious little girl who read a little old for her age. I have a lot of experience with kids, and Maggie talked and acted more like a 10 or 11 year old than an 8 year old, but I'm willing to give that a pass since much was made of her intelligence and fascination with nature.

Even though Jason and Ben don't know each other well, the connection between them—sexual and otherwise—was palpable. I would typically roll my eyes at two people falling in love after spending just a few days together, but I think tragedy can bring people closer and allow them to feel emotions they'd typically bury.

Road to the Sun is lovely in so many ways; the suspense doesn't take over the romance, and the few steamy scenes are tender and passionate.

The epilogue delivers an amazing HEA. I'm not kidding. A-MAZE-ING, one of the best HEAs ever.

"Oh, God. This is too good to be true." Jason moaned, his eyes squeezed shut ...

All good books are alike in that they are truer than if they had really happened and after you are finished reading one you will feel that all that happened to you ... the good and the bad, the ecstasy, the remorse and sorrow, the people and the places and how the weather was.