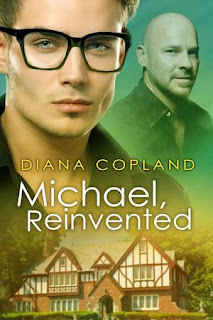 This book has no ending. Seriously, the story just sort of peters out. I was happily reading along, flipped the page on my Kindle, and got "More from Diana Copland." I frantically flipped back because surely I skipped something, but NOPE, that was the end.

*stomps foot* Why do authors do that?

I loved the first book and was thrilled to revisit with David and Jackson, particularly on Valentine's Day when Jackson goes all out, but I wanted more of Michael and Gilbert doing something other than snarking at each other.

The relationship devlopment consists of Michael pushing Gil away until a tragedy strikes that makes Michael realize he truly cares for Gil. The men finally connect at 84 percent, but then I blinked and it was over. There were only two steamy scenes, which was also disappointing.

Michael, Reinvented is more crime drama than romance, with a stronger focus on friendship than love.


A perp vandalizes Jackson and David's house and attacks Michael. The police think it's the same man who vandalized Jackson's car in book 1. It's definitely a hate crime. The police investigate, and everyone is on edge and nervous.

Vern is as grouchy as ever, but Manny comes out of his shell a little. I really wonder if those two will end up together. Just how old is Vern anyway (this may have been mentioned in book 1, but I don't remember)? What with him calling Michael "sweet boy" and all the jokes about Vern being the "old man," I kept thinking he's 60, but surely that's not true.

This is a good time to mention that this book CANNOT be read as a standalone. The mystery is integral to the story, and that's set up in the first book and will clearly continue in book 3.

I really adored Gil, but Michael's POV filters the story, so we don't really get to know him. We don't even get the full story of what inspired the whimsical mural Gil painted in the children's oncology unit at a local hospital.

The ending is a HFN. The men are together, barely, but there's no long-term plans and no strong resolution to the mystery/crime plot. However, the pacing is spot on (I wanted to keep reading!), and I like this group of friends and the quiet moments Michael and Gil share.

P.S. A neurologist is NOT a neurosurgeon. Research, please.