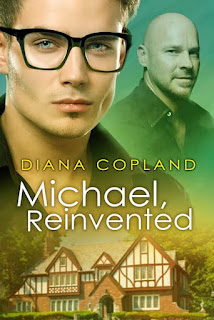 4.5 stars for this 2nd installment in the Delta Restorations series!

First off, this shouldn't be read as a standalone. That's not to say that you couldn't - you just shouldn't. I think that to understand the progression of Michael and Gil's relationship, you should have read "David, Renewed", because the underlying UST between the two men develops in book 1, and is carried to its explosive conclusion in this book.

But I'm getting ahead of myself.

Michael is still David's assistant, and since David is still happily in love with Jackson (now living in the same house), and since Jackson and his band of merry men have formed a renovation company, with David slated as the interior designer, Michael still sees Gil on a fairly regular basis. Their relationship consists of a lot of teasing (on Gil's side) and a lot of "the lady doth protest too much" on Michael's side.

See, Michael is scared to admit to himself and anyone else that he's attracted to Gil, and that Gil possibly has the power to get past the brick walls Michael has erected around his heart due to past hurt. Therefore, Michael thinks that as long as he keeps Gil at bay and does not allow the man close, he'll be safe. So he snarks a lot. A lot. A whole lot. I giggled quite a bit at Michael's prickly responses to Gil's pursuit, knowing that it was inevitable, and just sat back to enjoy the ride to bliss.

Except the unknown entity from the first book who seems to be hellbent on hurting Michael's friends and business partners is still lurking in the bushes, and there's still the threat of David's abusive ex coming back to wreak more havoc, and when Michael is house-sitting for David and Jackson and finds a vandal outside of the house, his first call is not to the police but Gil.

There's a lot more to Gil than Michael realized, and slowly but surely, as Michael discovers more about who Gil really is, his opinion of the man is changing, and Michael sees that maybe, just maybe, it's safe to be honest with himself and acknowledge with his head that what his heart has known for a while.

And just when Michael seems ready to take that step, tragedy strikes.

Nothing like a wake-up call to get your act together, is there?


I adored Gil - he was such a good, kind, and super patient guy, someone with a somewhat gruff exterior but a heart of gold. And Michael, prickly, hurt, and scared Michael, just grows on you - I realized in the first book that he must have had some real heartache in his life to become so standoffish and hide himself from what is definitely a good thing.

I can't say enough good things about the writing - super smooth and engaging, without any lulls or abrupt time jumps, with excellent pacing. While the book is told entirely from Michael's POV, and while Michael is a bit of an unreliable narrator, we get plenty of between the lines information about Gil. Michael may not always understand what makes Gil tick, but it's always very clear what Gil's priorities are, and how much he loves Michael, even if Michael refuses to see it.

Obviously, the men from Delta Restorations all make multiple appearances here, so we get to revisit with Vern, an older man with a rough exterior, (pretend-)grouchy most of the time, and Manny, who comes a bit more out of his shell in this book, but who still carries the scars from a previous relationship inside and out. I do hope that Manny's book will be next, because he sure as hell deserves someone who loves him fully and completely. Hopefully, that person will be Vern. I loved the easy banter between the group of men, and it was clear that they all respect each other and have formed a strong, supportive friendship.

This was a wonderful continuation of this series, and I can hardly wait to read the next book. Extra kudos for including the Velveteen Rabbit in this story - brilliant idea and execution, and thanks so much for making me cry.

One niggle - a neurologist isn't the same as a neurosurgeon, and these terms cannot be used interchangeably. I'm not sure if this was a research fail or an editing fail, but hopefully this was fixed in the final version.

Highly recommended that you pick up this book and its predecessor.


** I received a free advanced copy of this book from its publisher. A positive review was not promised in return. **