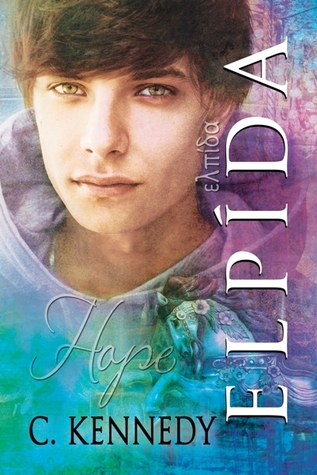 
ελπίδα. Elpída. Greek. Meaning hope Hope. v. /ˈhōp/ to want something to happen or be true and think that it could happen or be true Child abuse casts a shadow the length of a lifetime.~Herbert Ward Michael and Christy attended prom, graduated high school, and Michael leads the USATF tryouts. With Oxford University on the horizon, his future looks bright, and he believes life has returned to normal after Christy’s rescue. He couldn’t be more wrong. Christy has been free from a life of slavery for more than a year and has made remarkable progress due in no small part to the love he found with Michael. But the recent prosecution of a past abuser has shattered the life he so painstakingly built out of nothing but a mountain of horror. He now faces the daunting task of building a new life—yet again. Twelve-year-old Thimi has been missing since Christy left Greece and, unbeknownst to everyone, has hidden out in a vacant mansion in Glyfada. Learning of Christy’s survival is the only thing that brings him out of hiding. People, open spaces, even the most common of sounds frighten him beyond reason. A mere ghost of a boy, Thimi arrives in the US with no knowledge of the outside world—the only constant in his life a purple marble. Lost, shattered, and afraid, only hope gives them the strength and courage they need to begin anew.

The final installment of this trilogy leaves me shattered and sad, and full of anger towards the men who perpetrate this kind of abuse on children. But most of all, it leaves me with hope, exhilarated and happy, which, in this context, is nothing short of magic on the author’s part.

To take this extremely important and difficult subject matter, and lovingly show it without condescension or sensationalism, and give so many young people hope? Magic, indeed.

There is such powerful truth in this series. There is such compassionate giving of hope. It is horrid and beautiful at the same time, and it has a way of sending a spiraling sense of meaning out to young people who are hurting, telling them there is a future, there is a life, there is a way. Telling them that there are good people out there, who will love them.

Hope. Truly the most powerful of all human feelings.

We started with beauty in book one. And horror. And friendship. And love.
Omorphi. Beauty.
We continued with courage in book two. Lots and lots of courage. And love.
Thárros. Courage.
We finish with hope in this third book, as we run, and hide, and make mistakes, and fix them again. And love.
Elpída. Hope.

Thimi is a young boy who lived through the same horrors as Christy in Greece, and Christy finally gets to see his old friend again as he arrives in the US as a scared little waif of a boy. Thimi slowly opens up through the story, and as he starts to understand the sunshine that can exist in a normal life we get to see more about what happens inside a child after abuse.

This is a little bit like a beautifully crafted Technical Manual of Care and Maintenance for those who work with our collective youth, especially if they work with children or young adults who have had a hard time.

And the end result? The telling of a great, great love story — with true friendship shining through, the kind of love that inspires both happy endings and good laughs.

There are other new fascinating characters entering the scene, too, and especially Zero is someone I would love to see more of in a future book... I can truly say that I hope this trilogy gets a fourth and fifth instalment, because there are still things I’d like to know, (and history is full of excellent trilogies in five parts). (Just sayin’).

Beauty and Courage and Hope.
Because Elpida means hope.
And, as we said in the beginning, without hope, we are all lost.

I was given a free copy of this book from the publisher, Harmony Ink Press.
A positive review wasn’t promised in return. I also beta-read an early version of the manuscript.

Thank you for reading, hope you liked this review.