Hello! And welcome to my blog tour for my Dreamspinner Press ‘States of Love’ novella Rainbow Sprinkles.

Rainbow Sprinkles tells the story of Cooper, a down-to-earth guy who makes ice cream at the Dreamy Creamery, and Drew, who’s a Prince at Disneyland. I’d actually had the idea for the characters for a while when I saw the open call for States of Love novellas, which gave me the perfect excuse to write a ridiculously fluffy little story about two guys falling in love in California.

I’m a big, big Dis-nerd. Unapologetically so, with a huge amount of love and an abundance of opinions. Since Rainbow Sprinkles is only a novella I don’t want to give too much of the story away, so I’ve got a little excerpt for you and then through my blog tour I’ll be covering some of my favourite parts of Disneyland!

Up today is my favourite ride in Critter Country. Please do leave a comment and let me know your favourite attractions and places at Disneyland!
Thanks for stopping by. 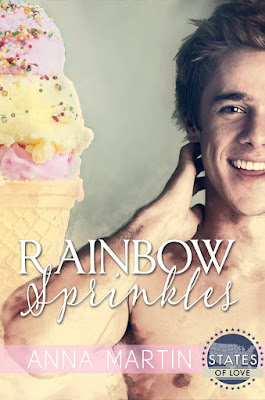 Cooper Reed has a fairly relaxed life for someone who lives in LA. He’s no celebrity—just the guy who makes sundaes at the Dreamy Creamery, and that’s the way he likes it. The highlight of every week is the beautiful guy who turns up and orders a sundae with rainbow sprinkles. Cooper still isn’t sure if that’s a code, because he has a huge crush and the hot guy is terrible at flirting.

Drew Tanner, it turns out, is an original California dreamer. He’s as wholesome as apple pie and twice as sweet, a real-life Disney Prince at Disneyland. But while Drew’s head is in the clouds, Cooper’s feet are firmly on the ground, and their different outlooks might be more than their new relationship can take.

He looked over the menu like he didn’t stop by here at least once a week. Cooper would have expected anyone who got two sundaes a week to be a little chubby around the edges, but not his hottie. He was tall and broad shouldered, with a narrow waist and long legs. Most of the time he came by in workout gear. Whoever thought to put an ice cream parlor on the same patch as a gym was either an idiot or a genius. Probably a genius, since the Dreamy Creamery was signposted on billboards for miles, and they were on the main route into Disneyland. The place saw a lot of tourist traffic.

Cooper winced. “You sure?”

“You’re sure something,” Cooper laughed, turning back to the freezers and his scoop. “In a cup, right?”

“Rainbow sprinkles,” Cooper finished for him.

Always the same. Always gross combinations of ice cream, topped with rainbow sprinkles, and if that wasn’t code, Cooper was going to die.

Critter Country certainly isn’t the biggest area of the park! There’s no doubt I would have picked Splash Mountain though – it’s definitely in one of my favourite attractions in the whole of Disneyland.

Song of the South was a 1946 movie which has pretty much been abandoned by Disney due to the racist attitudes in parts of the film. There are definitely moments which make you feel uncomfortable when watching it today, but the American South in the 1860’s and 70’s was a pretty racist place! It frustrates me that instead of addressing the issues, taking on the criticism and allowing the movie to be watched with context – both of the time it was made and the time it was set – Disney prefers to bury its head in the sand and pretend Song of the South never existed. It’s a shame, because Zip-a-Dee-Doo-Dah has to be one of the most iconic and recognizable Disney songs, and the combination of animation and live action paved the way for future classics like Mary Poppins and Bedknobs and Broomsticks.

The ride opened in 1989 and due to going way over budget, reused animatronics from the old ‘America Sings’ attraction. Not many people know that many of the animal characters on Splash Mountain have been on at least one other ride!

I’ll admit I’m not a great fan of big drops on rides and I loathe most roller coasters. It takes a lot for me to summon up the courage required to get on Splash Mountain because sweet Jesus, do I hate that drop at the end. It’s terrifying! I never, ever get a good ride photo. I always look like the white girl in the horror movie that’s about to be attacked by the monster.

I really love the way the story unfolds on Splash Mountain as you move from one scene to the next. This isn’t just another log flume theme park ride. That horrifying drop at the end makes sense as the moment Br’er Rabbit gets thrown into the Briar Patch, which is what makes it one of the best rides at Disneyland. 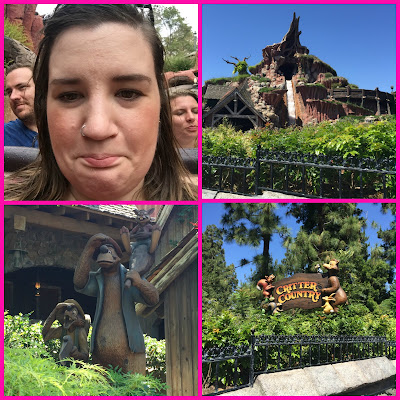 Apart from being physically dependent on her laptop, Anna is enthusiastic about writing and producing local grassroots theater (especially at the Edinburgh Fringe Festival, where she can be found every summer), going to visit friends in other countries, and reading anything that’s put under her nose.