Hello everyone! I'm Francis Gideon and I'm touring for my new release Hopeless Romantic, a trans rom-com of sorts. Follow along this week as I talk about all thinks romantic comedy, trans identity, and being pretty in pink! I'm looking forward to sharing some serious 1980s nostalgia; be sure to comment with your own bit of nostalgia for a $10 giveaway for Riptide publishing. 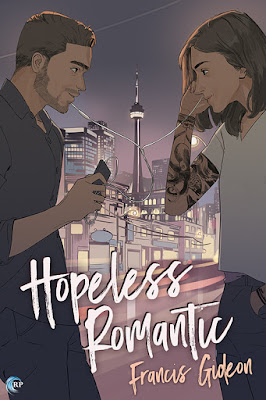 Nick Fraser is a true romantic. He wants the guy instead of the girl, but other than that, he wants everything his favorite rom-coms depict: the courtship, the passionate first kiss, the fairy-tale wedding. But after breaking up with the love of his life, Nick wonders if anything fairy-tale will ever happen for him.

Then he meets Katie, who’s just like a rom-com heroine. She’s sharp, funny, sweet, and as into music and punk culture as Nick is. What’s more, he’s incredibly attracted to her—even though she’s a woman. Nick has never considered that he might be bisexual, but his feelings for Katie are definitely real.

When Katie reveals that she’s transgender, Nick starts to see how much he doesn’t understand about the world, queer identity, and himself. He is hopelessly in love with Katie, but this isn’t a fairy tale, and Nick’s friends and family may not accept his new relationship. If he wants it all, he has to have the courage to make his fantasy a reality.


Francis Gideon is a nonbinary writer who dabbles in romance, mystery, fantasy, historical, and paranormal genres. Francis credits music, along with being an only child to a single mother, as why they write so much now. Long nights at home were either spent memorizing lyrics to pop-punk bands or reading voraciously. Add a couple of formative experiences in university, a network of weird artist friends, and after years of writing stories Francis never showed to anyone, they now have books to their name.

After receiving an MA in English literature, Francis wanted to do something a bit more fun. They soon found the LGBTQ romance community and fell in love on the spot. Since then, Francis has attempted to balance writing romances with as many different types of couples as possible while also attending school for their PhD. When not writing fiction or teaching university classes, Francis works on scholarly articles on everything from character deaths in the TV show Hannibal, the online archive of Canadian poet and artist P.K. Page, and transgender representation on YouTube. Francis is a middle name, used to keep students from Googling their teacher and asking far too many questions.

Francis lives in Canada with their partner, Travis, where they often spend nights disagreeing about what TV show to watch and making bad puns whenever possible. Travis receives dedications in Francis's novels because he tolerates Francis's long hours and listens to random story ideas late into the night. Francis also might be a bit of a hopeless romantic—as if you didn't already guess.


To celebrate the release of Hopeless Romantic, one lucky winner will receive a $10 Riptide credit! Leave a comment with your contact info to enter the contest. Entries close at midnight, Eastern time, on April 15, 2017. Contest is NOT restricted to U.S. entries. Thanks for following the tour, and don’t forget to leave your contact info!

Promotional post. Materials provided by the publisher.
Posted by Sandra at 4:00 AM