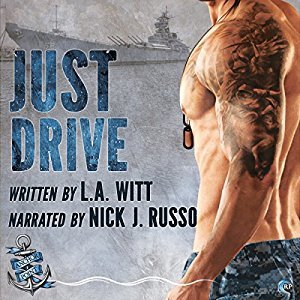 
For Sean Wright, driving a cab in the tiny Navy town of Anchor Point isn’t an exciting job . . . until he picks up just-dumped Paul Richards. A drive turns into a walk on the pier, which turns into the hottest hookup Sean’s had in ages.

After a long overdue breakup, Paul can’t believe his luck. Of all the drivers, he’s picked up by the gorgeous, gay, and very willing Sean. Younger guys aren’t usually his thing, but Paul can’t resist.

One taste and neither man can get enough . . . right up until they realize that Paul is Sean’s father’s commanding officer and the last man Sean should be involved with.

With two careers on the line, their only option is to back off. It’s not easy, though; the sex and the emotional connection are exactly what both men have been craving for a long time. But Paul has devoted twenty-four years to his career and his dream of making admiral. If he’s caught with Sean, that’s all over. He has to choose—stay the course, or trade it all for the man who drove off with his heart.

I seem to be getting over my age gap issues...

and if I'm not well, I need to be since I keep reading books where the MCs have significant age gaps.

It's been quite a while since I've read an L.A. Witt book and I've had this one on my TBR list since it was released so once again I can thank the joys of audiobooks for helping me take a bite out of that pile.

Let's start with the audio portion of this review because that's going to be short and sweet. Nick J. Russo was the narrator and as usual he did not fail me. His voices for both Sean and Paul were spot on for me. I loved Paul's deep voice with it's hint of gravel to it and Paul's voice had a bit of a younger tone to it and matched my minds idea of a twenty-somethings voice wonderfully. I love the emotion he instills in these characters. I don't have to try and imagine Paul's anger, frustration, passion, love for Sean or Sean's emotions as these two men struggle to sort things out and figure out how to be together...Mr. Russo gives those emotions in spades with his narration of this story.

As for the story...well 4 standing at attention stars...I think it's safe to say that I really liked this story. The age difference was a definite issue for these men. Paul's the CO of the local navel base...Sean's father is the Senior Chief on said navel base...he reports to Paul...Sean's listed as his dependent...there are rules about this...rules that can end careers if news of their relationship gets out.


The age difference on this one is a solid 20+ years and I was ok with it because of how it was represented.  It was shown in where these two men were at in their lives. Sean's in college and yes he still lives at home with his father but he's neither immature nor juvenile. He understands how much Paul's career means to him and he tries more than once to walk away for both Paul's sake and his father's. Paul's got two marriages and a few relationships plus a 24 year navel career under his belt. Yes there's a strong sexual relationship here but there's also a strong sense of mutual compatibility, shared interest and two people who just like each other. As well as a growing romantic relationship there's a bond of friendship and mutual respect developing between Paul and Sean.

The fact that the author didn't do the typical stereo-typing of making the older MC always be the voice of reason and the dominant sexual partner was definitely a refreshing take on this May/December romance as well.

Sean's relationship with his father was another aspect of this story that added more depth and believe-ability to things. Sean loved his dad and while he loved and respected his father, he also resented the impact that his father's career has had on his life. While his father loves him, they still find themselves at odds over things and they talk. Maybe things aren't always resolved instantly but again the love and mutual respect is evident. I really enjoy stories that give us real parents, not perfect just normal everyday people who love their kids and want to try and do what's best for them.

'Just Drive' is a wonderfully balanced story that easily felt like it could have happened at some navel base somewhere. But more than anything it was the ending of this story that tugged at my heartstrings. While our men may have gotten their happily ever after it was earned when changing priorities can only be achieved with compromise and sacrifice from everyone involved.

'Just Drive' was a story that worked 'just right' from start to finish.

An Audiobook of 'Just Drive' was graciously provided by the publisher in exchange for an honest review.