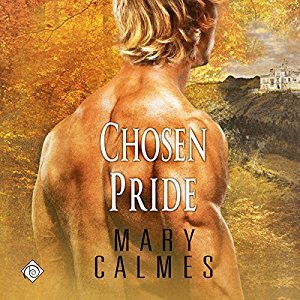 Jon Slade finally met his mate, but instead of it being the happiest day of his life, it became the saddest when wolf shifter Kelvin MacCurdy chose his obligations over their fated bond, leaving Jon to pick up the pieces of his shattered dreams. Lucky for him, Roman Howell, his boss and the owner of L’Ange, saw promise in the forlorn lion and put him to work so he wouldn’t have time to sit around and lick his wounds while he waited for his wounded spirit to heal.

Then the wolves make an official visit to L’Ange, and Jon finds out Kelvin’s pining for him is taking its toll on his position as the king’s champion. Though Kelvin’s training and the expectations of others steer him toward an intended mate, Jon has an unbreakable hold on his heart, and it’s no longer possible for Kelvin to keep himself from where he truly belongs.

But the conclave brings more than Kelvin to the château. It also brings a challenge to jackal alpha Quade Danas, a threat that Quade and Roman, Arman and Linus, and Jon and Kelvin may have to fight in order to keep L’Ange’s family intact. Jon never wanted to lead a pride, but the loyalty and devotion to one is ingrained in him. Kelvin was raised to punish anyone who questioned his king, but the calling to protect others runs through his veins just as deeply. To come out on the other side of the battle together, Jon and Kelvin will have to hold the darkness of solitary pride and broken hearts at bay—and find strength in belonging to something bigger than themselves.

Yeah, I'm back with more Mary Calmes and this times it's on audio. I enjoyed this book the first time around when I read it...I truly did. But I've made a discovery as much as I enjoyed reading the e-book the audio book was just hella' good fun.

Here's the link to my review of the e-book...Chosen Pride - original review

So...lets see...I think we've established I love Mary Calmes, I've read this book and really liked it but the audiobook was even funner (yes, that's a word of course it is...ok, I just made it one)

Tristan James did an awesome job on this one for me especially with the voices of the MCs. First off he met my initial requirements of giving me voices that were consistent and conveyed emotion keeping me engaged in the story. But beyond that he gave me voices that gave life to the characters and we're not just talking people here these are shifters and I needed the voices to give me that something more that make me feel like I was being emerged in the world of the paranormal and I was.

John Slade is a lion shifter who for me is just beyond amusing. John's a lion shifter so of course this means he's a predator and pretty much at the top of the food chain. Nothing truly makes him feel threatened so at times he's pretty oblivious to things in his world like Sebastian the shifter who's wanted him practically since they met and John is so secure in his knowledge of his place of in the food chain that he doesn't even realize Sebastian is a shifter for the longest time. John's also stunningly gorgeous and given that he's a lion shifter...this makes sense. I mean really think about it lions are one nature's noblest beast and they are truly beautiful so logic for me says that a lion shifter's going to be beautiful no matter what his form...human or beast. I love that there are things about his world that John just takes for granted and it comes through in his voice and it's almost bland tone of confidence that some things are the way the are and that he knows it without being told. I was more than a little pleased and impressed with how well Tristan James conveyed the personality contained by this character and really helped bring him to life for me.

I was also totally enamored with Kelvin MacCurdy's voice. His thick Scottish brogue was beautiful and totally curled my toes. While not as complex of a character as John. Kelvin is a man who is strong and controlled physically, emotionally and mentally. He knows his world and understands his place in it until John Slade comes along and makes him want more. I loved the emotion and depth that were brought to this character for me by Mr. James.

While I absolutely enjoyed the e-book the audio book gave this story a level of fun and enjoyment that was a wonderfully pleasant surprise and has me thinking that maybe I need to get the audio books for the first two stories in this series.

An audio book of 'Chosen Pride' was graciously provided by the publisher in exchange for an honest review.

Buylinks are provided as a courtesy and do not consitute an endorsement of or affiliation with this book, author or booksellers listed.