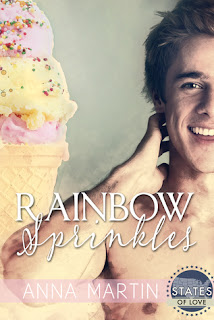 Cooper Reed has a fairly relaxed life for someone who lives in LA. He’s no celebrity—just the guy who makes sundaes at the Dreamy Creamery, and that’s the way he likes it. The highlight of every week is the beautiful guy who turns up and orders a sundae with rainbow sprinkles. Cooper still isn’t sure if that’s a code, because he has a huge crush and the hot guy is terrible at flirting.

Drew Tanner, it turns out, is an original California dreamer. He’s as wholesome as apple pie and twice as sweet, a real-life Disney Prince at Disneyland. But while Drew’s head is in the clouds, Cooper’s feet are firmly on the ground, and their different outlooks might be more than their new relationship can take.

I love Anna Martin's work. Three of her novels are on my Best M/M Romance of the Year shelves: Signs, My Prince, and The Impossible Boy.

She writes flawed but likable characters, realistic dialogue, and just enough angst to make the HEA that much sweeter. She's also British and never dumbs down the language for an American audience. Her books ring authentic and true.

But Rainbow Sprinkles, set in California, is missing . . . something. For one, the MCs are American, so there's no Britishness to be found. The speech patterns aren't those of two California boys in their early-20s (granted, Drew is from Oregon, but still).

The MCs are nice but not particularly interesting. Cooper works at an ice cream shack and tends bar at night; he's content in the now and doesn't think much about the future.

Drew plays a prince at Disneyland and hopes to get into acting more seriously. He charms Cooper by always ordering rainbow sprinkles on his ice cream sundaes.


This is a cute story with a couple steamy scenes. Drew tries so hard to be romantic. The guys' dates to Disneyland and Venice Beach are really adorable, especially when they walk down the beach holding hands. However, the plot lacked tension, and I found myself a little disconnected from the MCs and their relationship, which seemed based on attraction and not much more.

This book is part of the States of Love series, but the portrayal of California was really stereotypical. There's more to California than Disneyland!

There is an epilogue, but I would still call the ending a HFN, as it tells us nothing about Drew and Cooper's relationship except that they're still together.

I was looking for more oomph, a little more angst, and a stronger ending. Rainbow Sprinkles is short and fluffy; it made me hungry for ice cream. I liked the story fine, but it won't stay with me, like so many of Martin's books.