a title from the Dreamspun Desires series 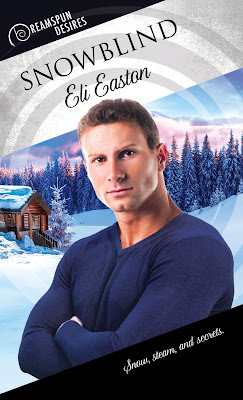 The latest snowstorm carries something unexpected to the doorstep of Hutch’s secluded Alaskan cabin: a stranger named Jude, the most beautiful man Hutch has ever seen. Jude says he’s in the area for a ski trip and that he fled a domineering lover, thinking he could make it into town. But Hutch is a suspicious SOB and treats his unwanted guest warily. The problem is Jude isn’t just gorgeous, he’s funny and smart and flirtatious.

Two gay men snowed in for three days—things happen. Really good things. By the time the storm clears, Hutch finds himself a little too attached to Jude Devereaux, San Francisco-based male model. But is Jude what he claims to be? Or is he entangled in the secrets Hutch moved to Alaska to escape?

SPY VS SPY – The inspiration for Snowblind
By Eli Easton
Snowblind was the only story I’ve ever written that was inspired by a dream.  I had been binge-watching Peaky Blinders, a BBC TV series about a gangster family set in 1919 Birmingham, England.  It’s based on a real criminal gang and stars Cillian Murphy.  The show features lots of ganster-y schemes, crosses and double crosses, and surprise plot twists.
After watching the show, I had a dream in which two men continually one-upped each other and nothing was as it seemed. The next day when I woke up, I couldn’t remember a lot of the details, but I remembered that feeling of suspense and surprise, the way everything kept “twisting” in the dream, and doing an about-face. I loved that feeling and wanted to try to capture the mood in a story. I sat down and scratched out the first outline for “Snowblind.”
On the surface, “Snowblind” is a story about two men stuck together in a cabin during a winter snowstorm in Alaska. It’s a trope I’ve always enjoyed reading.   The “oh no, we’ll get hypothermia if we don’t have sex right now” aspect that sometimes appears in such stories is both patently ridiculous and sexy as hell.  And the idea of two strangers being stuck together for days with no distractions but each other is an interesting one, pscyho-sexually speaking.  A person might be tempted to do things in that scenario that he or she otherwise might never dare. Forced intimacy and the threat of death can lead to uncharacteristic impulses.


But beyond the “trapped in the snow” set-up of the story, there’s another novel here, a “spy vs spy” action story in which nothing is quite what it appears. I can’t say much about it that wouldn’t spoil the plot. However,  I can say that I’ve never written anything quite like it, and I had no idea how it would be received by readers.  It’s not exactly the sweet hurt-comfort stories I’m known for.  So far, the ARC reviewers on Goodreads  talk about being very surprised by the story--in a good way.  That’s a win!
I hope you’ll give Snowblind a try. At 50K words, it’s a quick read and the plot moves fast.  Go into it with no preconceptions and no spoilers if you can!


Having been, at various times and under different names, a minister’s daughter, a computer programmer, a game designer, the author of paranormal mysteries, a fan fiction writer, an organic farmer and a profound sleeper, Eli is happily embarking on yet another incarnation as a m/m romance author.
As an avid reader of such, she is tinkled pink when an author manages to combine literary merit, vast stores of humor, melting hotness and eye-dabbing sweetness into one story.  She promises to strive to achieve most of that most of the time.  She currently lives on a farm in Pennsylvania with her husband, three bulldogs, three cows and six chickens.  All of them (except for the husband) are female, hence explaining the naked men that have taken up residence in her latest fiction writing.
Her website is www.elieaston.com
You can email her at eli@elieaston.com
Eli is also on Facebook and Twitter.