I don’t know about you, but I’ve recently found myself getting quite engrossed in the game of darts on television. Part of the reason for that may well be because I’m Dutch and that there are several exceptional players from the Netherlands on the circuit. Another part of it is that it is a sport like few others when it comes to interactions between the players and their audience; at times it resembles a circus more than it does a sporting event. Whatever the reason, I always enjoy watching and I always end up getting engrossed in the game, even when I don’t know the contestants.

Of course darts is also a game that can be played almost anywhere, provided you have a wall and just under three metres of free floor space between the board and the oche (throw-line). My brother and I used to have a board when we were kids and although I never did get the hang of scoring points, I did enjoy trying.

Troy and his best friend Lorcan play darts once a week in a local pub. They’re both quite good at the game and they’re usually very competitive — whenever Troy is not otherwise occupied that is.

“Go? Go where?” Troy stared at his friend. “Shit. Darts! It completely slipped my mind. Give me a minute to lock up and I’m all yours.”

How he’d managed to forget their weekly darts evening he’d never understand. Troy and Lorcan had been playing together and against each other since they were teenagers. They’d both played on the team of what used to be their local pub, up until a few months ago.

With Troy’s mind on other matters—or should I say another person—he doesn’t stand a chance against Lorcan on this particular evening. And that brings me to another, although probably less well recognised advantage of playing a game of darts with your best friend. Lorcan realises that Troy’s mind is otherwise occupied from the start and, being the good friend that he is, he gets Troy to open up about what’s on his mind and is able to give some very useful and much needed advice.

Because finding the one who’s just right for you, that person who hits all your buttons is pretty much like hitting the bull’s eye in the relationship game, isn’t it? But just as it is possible to miss a throw or to hit one of the wires separating the numbered wedges and have your dart deflected, life has a habit of placing obstacles in our way to a happy-ever-after. The big question of course is whether or not Troy and Xander will be able to reach their magical ‘one-hundred-and-eighty’, despite all the complications they face. 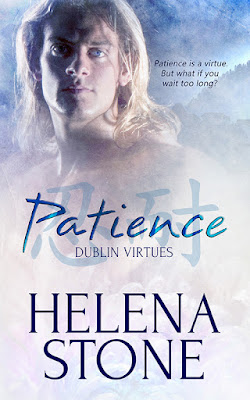 Patience is a virtue. But what if you wait too long?

While Xander Ekman’s dream of becoming a successful artist has come true, his love life has gone from bad to worse. Sick of the endless string of one-night stands, he accepts the challenge when his best friend, Erik, bets him that he can’t be celibate for a month. Now all he needs is a reminder to keep his distance in the heat of the moment.

Troy Moriarty doesn’t have time for love. He’s too busy trying to keep his recently opened tattoo parlor afloat. Besides, ever since the man who was supposed to be his business partner abandoned him to run the shop on his own, he has a hard time trusting others.

When Xander turns to Troy for a tattoo that will remind him to be patient, the attraction is instant. But faced with Xander’s month of celibacy, Troy’s trust issues, and a nemesis lurking in the background, their relationship may be doomed before it has a chance to begin.

Helena Stone can’t remember a life before words and reading. After growing up in a household where no holiday or festivity was complete without at least one new book, it’s hardly surprising she now owns more books than shelf space while her Kindle is about to explode.

The urge to write came as a surprise. The realisation that people might enjoy her words was a shock to say the least. Now that the writing bug has well and truly taken hold, Helena can no longer imagine not sharing the characters in her head and heart with the rest of the world.

Having left the hustle and bustle of Amsterdam for the peace and quiet of the Irish Country side she divides her time between reading, writing, long and often wet walks with the dog, her part-time job in a library, a grown-up daughter and her ever loving and patient husband.

Helena can be found in the following places: