Blogtour: Momo, My Everything by Posy Roberts 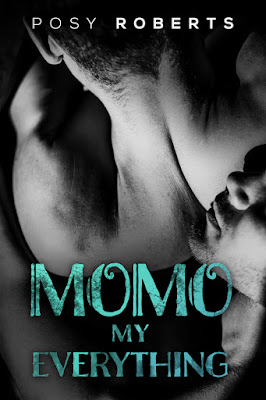 
Brave the spotlight for the man he loves, or stay alone in the shadows...

William Harris is a reserved man, private and guarded. He has no one to go home to. He’s never found a man worth sticking around for. He’s never been in love. And he’s convinced he’s happy with his lone-wolf life.

Nate Kelly is William’s opposite, social and easy going. He comes into William’s life as the elegant geisha Momo. When William realizes Momo is a man in drag, he’s captivated.

From their first date, William’s world changes. Nate is nothing like his usual type. And William soon finds out being with this carefree man means always being on display and attracting attention, which makes him want to retreat. He tries to keep Nate at arm’s length, but it’s no use. Nate’s transformed his life in a matter of months and keeps drawing him back in.

If they stand a chance, William has to be comfortable standing next to someone so at home in the limelight. Their future together and William’s happiness depend on it. Is Nate the man finally worth giving up William’s solitary existence? Is he worth sticking around for?

*Extensively reworked from the short story, The Measure of a Man.


When writing fiction, it’s important for authors to do their research. When writing about experiences authors have not lived, it’s even more important. I’ve always loved research, so it’s never been a dreaded part of my job. It’s fascinating to me. Some books require a lot more research than others, and Momo was one of those, in part because I was writing about teahouses and tea ceremonies and geishas.

Momo is a story set very much outside my own realm. I’ve written stories about men living in places close enough that I could visit and in cultures that are similar to my own. I’ve also written about men living very differently than me (commune!), but Momo was bigger.

While I once was cast as a geisha in the opera Madame Butterfly, I barely knew anything aside from my costume, makeup application, and the mannerisms I was taught to either avoid or play up while in character. But it was an opera on a stage where our performances had to carry to the back row of the huge theater, so it wasn’t realistic. I needed more information.

William first encounters Nate as Momo, the geisha, at a teahouse during a business dinner. After dishes have been cleared, the geishas arrive to entertain the guests. Momo is the girl who performs the tea ceremony.

I watched countless videos of tea ceremonies being performed by women in Japan. I also read descriptions and learned there was more than one type of tea ceremony. While I didn’t fully understand the purpose behind everything, I was able to witness the time-honored tradition. My goal was to capture the beauty and reverence of this ceremony.

William is captivated as he watches Momo’s delicate yet precise movements as she prepares the tea. He has great respect for the ceremony and the geishas. After the ceremony is over and the geishas sit to entertain the guests, William realizes Momo is a man in drag. His whole world sorta flips upside down. The man seated beside him suddenly captivates him in a way he’s never experienced before.

Nate’s the complete opposite of William’s type and what he typically desires in a man. But all it takes is one date, talking into the wee hours of the night, for William to be hooked. William tries his hardest to fight it, but he doesn't stand a chance against the draw of Nate and Momo.

I’d like to think the beauty of the tea ceremony was part to that fascination that made Nate irresistible to William, but you’ll have to read Momo: My Everything to find out. ;)


Posy Roberts writes about the realistic struggles of men looking for love. Whether her characters are family men, drag queens, or lonely men searching for connections, they all find a home in her stories.

Posy is a Jill of all trades and master of the drill and paintbrush. She’s married to a partner who makes sure she doesn’t forget to eat or sleep during her writing frenzies. Her daughter, a budding author and cinematographer, helps her come up with character names. For fun, Posy enjoys crafting, hiking, and singing spontaneously about the mundane, just to make regular life more interesting.