Blogtour: Love In the Time Of Hurricanes by CC Bridges

Love In The Time Of Hurricanes

A States Of Love Novel

Thank you for celebrating the release of Love in the Time of Hurricanes with me! As part of the States of Love series, this book celebrates the state of New Jersey and the Jersey Shore in particular. Enjoy the exclusive excerpt. 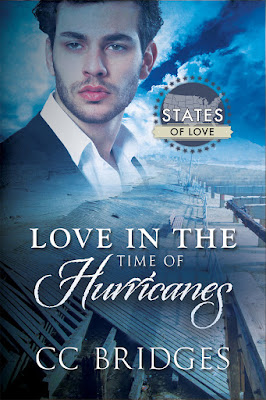 The night Nick Henderson storms into Martelli’s Pizzeria, he’s just looking for something to eat. Along with dinner, he finds Lou Martelli—pizza cook extraordinaire and Jersey Shore native. Nick is renting a Shore house for the winter while taking classes at the local community college as he devises a way to escape the accounting major his father chose for him.

When Lou offers to show Nick around, heat flares between them as they realize they have more in common than domineering families. But it’s not all fun and games on the boardwalk. Hurricane Sandy blows ashore, changing the place Nick was starting to think of as home. His peace is shattered, and it will take everything he has to keep his relationship with Lou from being torn apart by the storm brewing around them.

States of Love: Stories of romance that span every corner of the United States.

The following Tuesday, I sat in my car outside Martelli’s Pizza, and I felt like an idiot. Through the giant glass windows, I could clearly see Lou sweeping up in there. For a moment, it was nice to watch. His broad shoulders were a joy to behold, and I entertained the fantasy of being pinned down beneath them. Lou was broader and taller than me, and the thought of all that strength turned me the fuck on.

Course, all the fantasies in the world didn’t mean a damn thing if he wasn’t gay.

Or if I was too chickenshit to go in there and talk to him.

I’d made sure to return on the same day of the week as the first time we’d met, a little past closing time. I didn’t want any witnesses to my making a fool of myself, and I definitely wanted to be sure he’d be here. I’d fucked around at the library for an extra hour, even though I’d finished my work for the whole week.

Time to grow a pair. I got out of the car and went inside. That same bell jingled as I opened the door, and damn if he wasn’t listening to Springsteen again.

He looked up and grinned as I entered. The smile brightened his stupid, adorable face and set my heart pounding. “Hey. You came back.”

“Hi.” I put my hands in my pockets because I didn’t know what to do with myself. “Yeah, I did. Figured I knew you worked Tuesday nights.”

“Most nights. I live upstairs, so lucky me, I get to close up.” He rolled his eyes. “Have a seat.”

Lou collected the broom and dustpan and tucked them in a corner. He moved behind the counter as I took the same seat I had before. He actually seemed happy to see me. Huh.

Lou grabbed a dish towel, opened the oven, and pulled out two steaming bowls of spaghetti and meatballs. “Figured you’d be hungry.”

“You must have been pretty confident I’d come back.” I could’ve kicked myself the second I said it. I shouldn’t question this. The moment I started doubting and second-guessing, I’d screw it all up.

He winked again, and I melted into a tiny puddle of goo on the spot. “I figured if you went to the trouble of talking to my sister, then you’d be back.”

“That was your sister?” Now that I thought about it, there was something similar about their eyes. I should have realized it sooner. “Wait, does that mean the old guy working in the kitchen was your dad?”


“Depends on what day it was. We do have a few nonfamily employees.” Lou grabbed some silverware from beneath the counter, along with a real cloth napkin and set it next to the food in front of me. “Dig in.”

I took the cloth napkin and laughed. “I made a mess of myself last time?” Or maybe he couldn’t stand to watch me make another messy pile of napkins on the counter.

Lou tapped the napkin dispenser. “We save the cloth ones for the customers we like.”

The twelve-year-old in me wanted him to clarify—did he like me, or did he like me? Instead I twirled up a helping of spaghetti. I wasn’t as hungry as the first time I landed here, but I could always eat.

The sauce tickled my nose with its scent, but when I filled my mouth, it felt like something was missing. “This isn’t your sauce,” I accused. “Or, gravy, whatever.”

“Well, yours is much better.”

His cheeks went red, and he ducked his head. “Don’t let my father hear you say that. That right there is the product of a hundred years of my Italian ancestors.”

I took a risk. I covered his hand with my own and that forced him to look up. “Well, those ancestors ain’t got nothing on you.”

“Thanks.” He pulled his hand away to continue eating.

I chowed down. It might not have been Lou’s sauce, but it was still really good, better than anything I had in the kitchen back at the Shore house. The stuff in the jar didn’t even compare.

I’d finished and was staring down at the gravy left in my bowl, wondering if I could get any of that fantastic bread to dip into it when Lou startled me.

“Would you like to go to breakfast with me?”

“I can see how that would hinder your social life.”

“Well, I have an early class tomorrow.” I pulled out my phone, mostly for something to do; it wasn’t like I needed to check my schedule at this point. “Maybe Friday?”

“What’s your number? I’ll text you when and where.”

We exchanged numbers, and I left Lou to finish his cleanup. But I’d gotten to my car door before I realized Lou never said if it was a date.

CC Bridges is a mild-mannered librarian by day, but by night she writes about worlds of adventure and romance. When she's not busy solving puzzles in an escape room, she can be found diving into comics or binge-watching superhero movies. She writes surrounded by books, spare computing equipment, a fluffy dog, and a long-suffering husband in the state of New Jersey. In 2011, she won a Rainbow Award for best gay sci-fi/futuristic novel.