Thank you to My Fiction Nook for hosting me today.

There’s a car accident in Just the Right Notes, which adds lots of drama to a story. Car accidents, especially very bad ones, can be scary in and of themselves. The injuries and death they cause are even scarier. For the record, no one dies in this book!

I’m very lucky in that I’ve only been in one car accident and it was a single car accident. I was about seven years old and we were driving home from my grandparents after Christmas. The highway roads were icy, but were being sanded. All of a sudden they weren’t anymore and the black road in front of us was actually black ice.

We went ass over teakettle for quite a ways, taking out roadsign and winding up on the roof of the car, hanging from our seatbelts. I had been sitting in the front between my parents (back in the day when cars had a seat there).

I remember not being able to undo my seatbelt and I remember not wanting to crawl out the broken window because the snow was so cold. I remember sitting in the back seat of the little car that had stopped for us, wrapped in a blanket. The people had one of those rubber clown faces that you put your fingers in the back of and manipulate.

I know we were taken the nearest hospital in an ambulance, but I don’t remember the ride at all. I do remember the doctors pressing against the hole in the back of my head and me telling them it didn’t hurt because I didn’t want to have to have stitches. I remember being wheeled through the halls to the x-ray room, but not actually having the x-rays taken.

It’s funny what the brain retains.

We took a train the rest of the way home the next day, luckily no one was badly hurt, though we did all have tiny marks all over our faces from the glass. The irony is that we’d only had the car for about four months and this was the first time we hadn’t had to rent one or take the train to go visit my grandparents. My folks didn’t buy another car until I was in university. 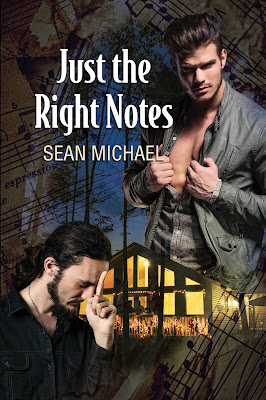 Elliot is an up-and-coming architect who just opened his own firm—which is a lot more work and pressure than he expected. His partner, Graham, is a respected composer and conductor. They share their love and lives in a beautiful house designed by Elliot, and whenever things get too hard to handle, they retreat to their cabin getaway where Elliot becomes Dom to Graham’s needy little sub.

When things at Elliot’s firm begin to crumble, Graham needs to be the tough one, the one to suggest the cabin and the games they play there, knowing Elliot’s role as Dom will give him strength and that their games will recharge his lover. Together, they keep working to find that precarious balance in their lives—until an accident threatens to change everything. Elliot and Graham’s love faces its greatest challenge yet, and only the resilience they draw from each other can see them through hardship and keep the music in their lives.


“No. No work. No phone calls. No distractions. Just you and me. Now stop stalling and put on your shoes. We’ve got some driving to do.”
It was telling that Graham didn’t fight him, only rumbled a little as he put his shoes on. Elliot kept his grip on Graham’s hands, led his beautiful lover out to the car, opened the door.
“I love you. I… I feel like I should apologize…,” Graham said.
“Apologize for what?”

“I don’t know.” The tears were close to the surface again, the anger.
He leaned close and gave Graham a hard, sharp kiss. “Get in the car, G.”
Elliot pushed Graham into the seat, bent, and buckled Graham’s seat belt before closing the door and going around to the other side. This weekend he was going to send the demons that were chasing Graham packing.