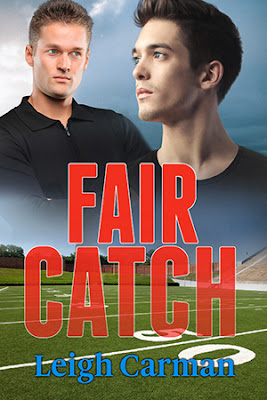 One night of passion.

They never expected to see each other again.
They were wrong.

Tobias Bennett is a quiet and unassuming man who teaches yoga and enjoys parkour. Though he is proud to be gay, an abusive relationship with a domineering man has left Tobias wary of romance, and he keeps to himself in his tidy Los Angeles apartment.

Pro football player Sullivan Archer is Tobias’s complete opposite: loud, brash, fond of the spotlight… and deep in the closet. When a hamstring injury sends Van to Tobias as part of his therapy, neither of them is expecting to come face-to-face with his one-night stand. Now they’re stuck together throughout Van’s healing process, and the close proximity will force them to deal with some hard truths. For Tobias, it’s realizing his hookup is a celebrity. For Van, it means accepting that he likes Tobias more than he wanted. They’ll both have to acknowledge that if they choose to pursue a relationship, their lives will change in big ways.


*The Players of LA Series are standalones, but characters from each book to appear in subsequent novels. It is recommended to read in order to maximize the reading experience*

My name is Leigh Carman and I’m here to discuss the release of Fair Catch, book 2 in the Players of LA series by Dreamspinner Press. Don’t worry if you haven’t read book 1. The novels are standalone. Different characters do make cameos now and then, but nothing that would prevent you from fully enjoying reading out of order.
Today, I thought you might like to see how I come up with my characters. What I do to shape them into the people you discover within the pages of my books. I’ve never revealed this to anyone before, so consider yourselves the lucky ones to be the first to get an inside peek at my process!
First, I pick names. I happen to love characters with nicknames. It’s a thing with me. I’m not sure why, probably because I was given a name with no chance of ever having a cool shortened version. Then I sketch out the character’s physical attributes, usually using a real life person as inspiration.
For Van Archer, I chose the Patriots’ Rob Gronkowski. Yeah, yeah, I know. Everyone hates the Patriots, but as a born and raised New Englander, I’m loud and proud when it comes to the Pats. I tweaked the enormous wide receiver to be a little less… dorky (sorry, Rob), but physically, his height and hair color are a good match for what I wanted for Van.
Then I create notecards for each character that look something like the below—I removed the thumbnails I include in my notes because I don’t own the copyrights.
For Toby I used an adorable young model with awesome hair and great bone structure. Unfortunately, I can’t share that pic either, darn it.

Now that I have my main characters, I go to work on my secondary characters. Fair Catch happens to have a very important character, Toby’s BFF, Leo Greenway. I really wish I could show you the pic for my inspiration for Leo, because the guy is PERFECT. Leo is one of the MC’s in book 4, Full Count, where he finds his own true love with a very out, bisexual baseball player.
Leo is ah-mazing. I love him. In fact, he might be the best character I’ve ever created, in my opinion, obviously, lol.
Once I have my vision, their personality quirks, and their physical aspects all worked out, it’s easy to reference my cards whenever I need help deciding how a character will react to a situation or what they might say.
That’s pretty much it for character sketches. Motivations aren’t included in my notes as I usually flesh those out as I go along in the book. I’m kind of a “by the seat of my pants” author, which is probably the more difficult way to write, but planning is just not my thing.
If you had to create a character, what celebrity or athlete would you use as inspiration? What would they do for a living in your book? For example, would you create a physician who looks exactly like Chris Pine? Or a waitress who looks a tiny bit like Tina Fey? The possibilities are endless once you get your imagination going.
Don’t forget to check out Fair Catch! xoxo
Leigh Carman

When the team athletic trainer told me to take yoga to increase my flexibility for not only my recently healed hamstring, but the rest of my muscles that were overtaxed to counterbalance the injury, I laughed in his face. When I realized he was serious, I swore, whined, cajoled, and even tried to bribe my way out of it.
No dice. Walt, trainer for the Wild Cats, is a sadistic bastard with zero sense of humor. He gave me a card for the LA Power Yoga Center and told me to get my ass into the beginner class immediately.
So, because I’m a good little fucking minion and don’t want to reinjure the grade-one hamstring tear I suffered in the Super Bowl seven weeks ago, I get to spend my off-season doing useless girly shit in a class full of obsessed fans and middle-aged women.
When I walked through the door, late and looking like a giant amongst the Lilliputians, I was mortified. Every single person in the room was staring as if I were an animal at the zoo. It was everything I dreaded—including the middle-aged women, fans, and whispers.
The one thing I didn’t count on is seeing my hookup, and recent obsession of sorts, standing in the front of the class, wearing dark blue, knee-length cotton pants that show off his tight round ass, and a skintight  black tank top that clings to his perfect body. It’s nearly impossible to keep my mouth from dropping open and my tongue from rolling out at the sight of him.
I try my damnedest to keep from ogling the man’s fine ass, but since I have to keep looking at him to do each pose, it’s nearly impossible. By the end of the class, I’m frustrated and angry, both from the fans that accost me and from the constant state of arousal I’ve been in for the last hour.
Mercifully, the last person finally leaves, and I can get out of here. Only I find I don’t want to leave. Will he even remember me? I sure as hell remember him. Toby. Gorgeous and passionate, with icy blue eyes and an unbelievably flexible body. Though that last thought now makes perfect sense since the man teaches yoga.
I wanted to get his number back at the club, against my better judgment and my usual rule of staying unattached to hookups. Toby was just too skittish afterward and bolted before I got a chance to ask for it.
I grab my stuff and look up to catch those crystalline eyes as they lock onto mine. Toby immediately ducks his head, his cheeks turning an alluring shade of pink. He tries to gather his own things, ready to run from me again.
Not this time, sweetheart.

She lives outside Atlanta with her husband, 2 kids, and French bulldog.

She is leaving explicit directions in her will for her friends to discreetly scatter her ashes around Fenway Park. Then they are to sit back, watch a game with a beer and a Fenway frank and have a wicked good time.