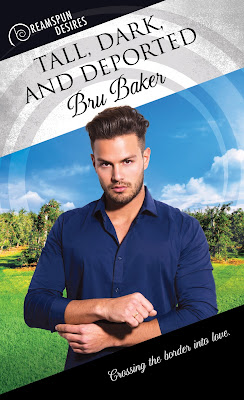 Mateus is caught in a catch-22. With his almost-expired tourist visa, entrance to Canada is denied, but the US won’t let him back in either. Crawford thinks he’s solved things when he tells the border agent they’re engaged, and it works—except now they have to actually get married before either of them can get back into the United States. But Crawford has been burned by marriage once, and he’s determined not to make that mistake again.

Neither of them expects real feelings to bloom out of their fake marriage, but they do. And the two of them have to learn how to be honest with each other to make things work, which is especially hard when their entire marriage is based on lies.

Hi, everyone! I’m Bru Baker, and I’m happy to be here today on My Fiction Nook sharing a video reading from my upcoming release, Tall, Dark, and Deported. In it, we see Mateus’s first impressions of Crawford as he watches him in a crowded airport. I’ll be posting a few more readings during the tour for Tall, Dark, and Deported, so keep an eye out for more!

This is a really cute and sweet romance using the fake-marriage-for-reasons trope, by pairing a young, kind and hard-working immigrant to the US with a somewhat jaded, slightly older businessman with a heart of gold he has protected behind some massive walls.

Hoping to renew his tourist visa by making a quick dash into Canada, so he can stay and help his brother and sister-in-law with their orchard, Mateus is at the airport waiting for his flight, when he happens to meet Crawford, who's waiting for the same flight, having been sent to Vancouver by his boss to help a failing hotel.

When their flight is cancelled, Crawford offers to rent a car and drive the two of them across the border to Vancouver. Knowing his visa is about to expire, and not willing to lose any time, Mateus agrees.

At the border, Mateus is denied entry into Canada since his US visa is about to expire, and then cannot return to the US, because his visa is about to expire. Seeing the young man in limbo and looking so scared to be deported back to Portugal, Crawford impulsively lies and proclaims Mateus his fiance, on their way to be married in Vancouver.


And now they're stuck. Obviously, for both of them to return to the US and not be in huge trouble, they have to get married. And they do. They even share a room, with one of them sleeping in the bed, and the other taking the couch, and the hotel's management giving them the best suite, and Crawford's assholish ex-husband a thorn in his side, and Mateus being ever so sweet and wonderful and supportive of his new husband, and... well, let it suffice to tell you that I had a blast reading this.

And there are some quieter, angstier moments too. Both Mateus and Crawford develop feelings rather quickly, but neither believes the other to return them, and neither has the guts to bring it up. Communication, they're a-lacking.

Of course, upon their return to the US as newlyweds, Immigration has a few questions, and oh don't you know, they're going to make sure that Mateus and Crawford aren't fake-married, but then kissing happens and the border agent is all swoony and happy (which, you know, in the current climate, bwahahahaha, yeah, right), but this is a Dreamspun Desires romance, and of course there's a HEA in which they both get exactly what they never knew they always wanted.

I really dig this author's writing style. Full of emotions, but not purple, and she can really write the UST. The longing. The wanting, the needing - it all comes across in her words. The backstories for both men were well-crafted and believable, and, considering most of the books in this series tend to be slightly OTT, also rather reasonable. I loved Mateus from the start, his strong convictions, and his humble and kind demeanor, and Crawford won me over too eventually.

This was lovely. Super cute, super fun, and super sweet. I just adore this series, and I adored this book.


Promotional materials provided by the author.
Posted by Sandra at 6:00 AM