Welcome to our second week of celebrating the amazing

In today's post, we're taking a look at the Brimstone series, as well as five little-known facts about Angel. And all the way at the bottom is another chance to win! 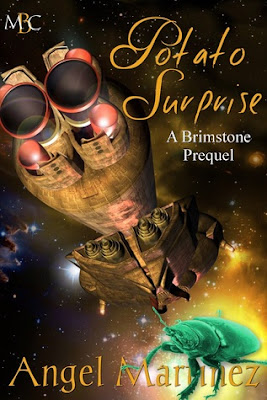 Before Ness, before Corny, before Leopold and Heckle and Mac, there was just Shax and Verin and a newly stolen, er, acquired cargo ship. Join Shax on his first adventure in space in which a pampered demon prince has a lot to learn.

When a steel trap of celestial and infernal politics threatens to close around them, Shax and Verin flee Earth’s system in a stolen ship, leaving everything behind. It’s an elegantly simple plan, with a new ship and a new life as carefree brigands among the stars.

But the ship seems to hate them, and in order to have any sort of life they need funds. A frightened man offering them a contract to deliver three mysterious crates comes just in time, and Shax is sure their troubles are over. Out of his environment and in over his head, Shax scrambles to understand the players and the consequences of his new life. With cargo that’s not what it seems, shadowy motives around every turn, and a gorgeous rogue named Julian for a dash of added confusion, Shax’s grand schemes of a new start may be his demise before he can even begin.


“Shh. I think I’ve found the AI’s manual interface.”
Verin subsided, grumbling and setting his clawed feet up on the console. Shax entered his retinal print and DNA sample scraping, made the final entries, and cleared his throat to speak to the AI.
“Computer? Lights up full, please.”
He expected to hear a beautifully modulated feminine voice or perhaps a deep, soothing masculine one. What he got instead was an unholy screech.
“Get your filthy lizard feet off my console!” the AI shrieked. “Where’s Iggy? Who are you people? Why is there another captain listed on my registry?”
“Ah, well.” Shax blinked a few times in shock. The AI shouldn’t have remembered the change. It certainly shouldn’t care that there had been one. She… he? Sounded a bit hysterical. “Iggy… you see, Iggy sold the ship to me. I’m Captain Goldner. I’m right there in your system.”
“Iggy wouldn’t sell me.” The AI gave an offended sniff. “There’s no proper bill of sale and I wasn’t notified.”
“I won the ship in a card game.”
“You’re a liar!” The AI’s next sentence sounded intrigued. “But you’re a very good liar. Your vitals hardly budged. And you are awfully cute, in a dangerous sort of way. Oooh, you stole the ship, didn’t you?”
“I don’t see—”
“Are you pirates? Is this a pirate ship now? Oh my.”
Of all the ridiculous… it better not faint. “Not precisely. But I am Shax, the Demon Prince of Thieves.”
“A prince? A pirate prince?” The AI’s voice edged perilously close to screech again. “I think I’m coming over all verklempt.”
“Quite. Could we perhaps have the lights back on?”
“Of course, your highness. Should I call you your highness? Your very sexy highness?”
“Captain would be fine, thank you.” The lights flared back on and Shax had to swipe at his watering eyes. “Do you have a name? I’d hate to keep calling you computer if you have a preferred name.”
“So polite too. Unlike that lump sitting next to you.” Somehow, the AI managed to convey mince and flounce in two short sentences. “My name is Ivana. Ivana Cockatoo.”
“Hell’s sakes.” Verin buried his face in his hands. “Fucking AI is a drag queen.”
“You have a problem with that?” Ivana shot back.
“No, no, of course not,” Shax soothed. “Ver, the AI is entitled to a persona he… she?”
“She when I’m performing, hon.”
Well, that’s confusing, since we can’t see you. “She’s entitled to adopt a persona with which she’s comfortable.”
“Why thank you, Captain,” Ivana said with a little sniff. “I think I like you.”
“Good. Do you think we could have the climate control back on?” Shax fought to keep his teeth from chattering. “I don’t do so well in the cold.”
“You poor thing. Of course you can. Were the mean shutdown protocols being nasty?”
“Um, yes. They were starting to be.” Shax tucked his injured hand inside his jacket, but the pod already felt warmer.
“We can change the AI persona, right?” Verin muttered.
“How rude!” Ivana sputtered. “I think you might be an organicist.”
“A what?” Verin rounded on Shax. “What the fuck is that ghost in the machine calling me?”
“An organicist, Ver. Someone who believes organic life is superior to artificial, er, machine life.” Shax slumped in his chair. At least the air wouldn’t be sucked out of the ship. “Ivana, perhaps we just need to get used to each other. Verin simply hates everyone. It’s nothing personal.”
“Stand up,” Ivana demanded.
“Pardon?”
“Please stand up,” she amended in a seductive purr.
Shax shot Verin a puzzled glance and obliged, sliding from the pilot’s chair. At least I’m not shivering anymore.
Ivana let out a pleased hum. “Turn around.”
One eyebrow arched, Shax held his arms out and turned slowly.
“Oh, you’re delicious, Captain Hot Stuff.” Ivana laughed, a low, throaty chuckle. “I think I’ll keep you.”

The first full book in the series, Hell For The Company 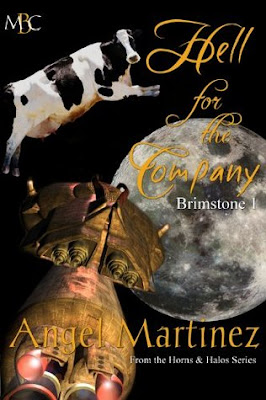 Demons and Angels have been among us for thousands of years, in many cultures and in many forms. What happens when you set the Mischief Corner authors loose on the vague prompt "Write a story about angels or demons?" The poor unsuspecting world is about to find out.

Shax, the Demon Prince of Thieves, has reconciled himself to exile. He has a grand time careening around the galaxy as a high-end, intergalactic purloiner of pretties. Everything's going just fine, thank you very much. All right, fine, the anti-gravity cows are a bit problematic and some of his buyers are bad for his health, but he manages until he comes across an injured angel in a psychedelic alien jungle.

He only rescues the wing boy for his golden feathers, but what Shax doesn’t know about angels could fill an intergalactic encyclopedia.


Bullets pinged off the rock beside Shax’s head.
Projectiles? Really?
He ducked lower and tapped frantically at his link, hoping it hadn’t taken damage. “Verin! You there, bud?”
A low growl came back through the link. “This better be—fuck! Is that gunfire?”
“Maybe,” Shax conceded as he flattened himself in the dust.
“What in Lucifer’s name did you do now, bonehead?”
“Um, there were pretties…”
Verin’s cussing became too heated and high decibel for him to continue the conversation for a moment. Finally, he stopped the tirade. “Get back here, then! Fast as that damn horse you borrowed can manage!”
“About the horse…”
“What?”
“Got shot out from under me. I could, ah, use some backup out here, Ver.”
More grumbling came through but this time accompanied by the sounds of engine startup. “You at least get your damn pretties?”
Shax grinned despite the dire situation. “Oh, yeah. Show you when we’re off this dirtball.”
Engine noise drowned the next round of grumbling. Thank hells. Verin was coming for him. Not that a little thing like a gunshot was going to kill a prince of hell but damn it, being shot hurt. Maybe some demons got off on the whole pain thing, but he’d rather skip it, thanks.
“There’s nowhere to go, scum!” the local protector of law and order bellowed. “Give up now and we’ll most likely hang you all nice and humane instead of skinning you alive!”
Oh yes, now there’s incentive for you. The shooting had stopped for a moment, so he dared to poke his head up above his rock cover. “How about a third choice?”
“You’re out of choices, boy!”
Shax rolled his eyes at the incredibly witty rejoinder. “How about I go away and you never, ever have to see me again?”
He offered his most charming smile, then dove for the ground, swearing a black streak when bullets zinged around him. Ow. Shit. He pushed his hat back, probing gently at his scalp near his right horn. His fingers came away bloody. “I am never going into any bar that has a piano player, ever again. Cheap, shoddy, hick town. Stupid humans.”
The roar of the Brimstone’s engines briefly muffled the gunfire. Shax thought his partner would come in shooting but Verin often had more precipitous solutions. He simply set the ship down on the posse.
“Ew. Squish.”
The few townsfolk who were not under the ship galloped off, suddenly keen to be elsewhere. The loading ramp lowered with the bitchy whine of old hydraulics. Verin stood at the top, huge arms crossed over his chest, tapping one clawed foot on the deck plates.
Shax staggered out of his hiding spot, trying hard for an annoyed expression rather than one of profound relief. He pointed to the hull as he stumbled up the ramp. “I am not cleaning that mess off.”
“Idiot.” Verin snorted. “The mess’ll freeze the second we leave atmosphere and burn off the next time we do reentry. So damn planet-bound still.”
“Shut up. Am not.” Halfway up the ramp, Shax stopped. “Why’s the ship crooked?”
“It’s not. Get in here. You don’t look so good, genius.”
Shax was about to admit he didn’t feel so great, either, when the loading ramp inconsiderately leaped up and hit him in the face. The last things he heard were Verin grumble-cussing and soft mooing.
Mooing?

Angel Martinez currently lives part time in the hectic sprawl of northern Delaware and full time inside her head. She has one husband, one son, two cats, a love of all things beautiful and a terrible addiction to the consumption of both knowledge and chocolate.


Thanks for celebrating with us. Come back next week for more of Angel's books, a personal story she's chosen to share, and another chance to win!