ARC Review: Secrets of You (Sunshine and Happiness 4) by Skylar M. Cates 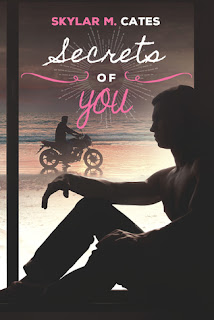 Carrying scars and regrets, River Darcourt avoids too much intimate contact. Among his friends, he is known as a quiet loner. Forget about love. It’s not something he will consider… until sweet, young, and tempting Morgan Hayes becomes his housemate. River closed his heart long ago, but the attraction is impossible to deny.

Morgan Hayes needs a change. He is moving out of his critical father’s home and in with his friends, including his secret/not-so-secret crush, River. Having feelings for River is a terrible idea. But what is a guy to do when the annoyingly sexy mechanic is just across the hall?

While Morgan has overcome ugliness and is ready for love, he’s just not sure River ever will be. They have both experienced pain in their lives. So Morgan dares River to take a chance, and love will either break their fractured hearts in more pieces or, just possibly, make them whole again.

I've been anticipating River's story since Here for You, the first book in the Sunshine and Happiness series. And when we met Morgan in the second book, Lovers, Losers, and You, I just knew he and River were meant to be together.

Broody, mysterious River is a man of few words; he holds his emotions close and his secrets closer. When things get tough, he gets on his motorcycle and rides for miles, jobs and friendships be damned.

River’s dreams were simple. Be with somebody who knew him. Who anchored him when life threatened to send him reeling. His heart had been so cold. His dream was warmth, love, and forgiveness.


Even after suffering a horrific attack in an alley outside a nightclub, Morgan is upbeat and cheerful. He tries to face his fears and sees the good in everything. Morgan knows there's more to River than meets the eye, and his want shows in every look, every gesture.

I was expecting a very angsty story, but Secrets of You is more about redemption than guilt, more about comfort than pain.

River is so tired of being lonely, Morgan is like a balm for his very soul. The men get together while their housemates are on a two-week cruise (it's Ian and Cole's honeymoon voyage!), so they have plenty of time to get to know each other. And they use the time wisely, oh, so very, VERY wisely.


Like the other books in this series, this story is absolutely SIZZLING. There's so much sexual tension, so much passion; the chemistry is through the roof, and there’s nothing (and I mean nothing!) the men won’t try. Skylar Cates writes amazing sex, at once dirty and tender. The physical connection the men share is incredible, but there’s so much more to their relationship.

River confides in Morgan and finally begins to let go of the overwhelming guilt he’s been carrying around for years. And Morgan, stronger with River by his side even when the road get tough (especially then), doesn’t feel like he needs to tone down his flirty, femme side—not even for his cantankerous father.

River must decide where to donate the money he received from the lawsuit he filed following Brendan's tragic death, but Morgan, trying to be supportive and helpful, is jealous of Brendan’s memory. Everyone tells him how much River loved Brandan, and he doesn’t want to compete with a ghost.

He doesn't yet see how the love he and River have is as true as it gets. That kind of love has no rivals.


Secrets of You brings us full circle. All the men we met in the first book are living their happily ever afters, and River and Morgan get theirs too (it involves marshes, sunshine, the smell of oranges, and a very sexy surprise).

We also meet some new characters: Logan the fireman and his ex-lover, the cop with the tragic side story, as well as Jonathan, a man staying at a homeless shelter (if you remember Marc’s story from book 3, you may remember Jonathan too).

Do I dare hope that Skylar Cates writes more books in this series? I can only dream! This is one my favorite contemporary M/M series of all time: beautifully written, SEXY, and romantic, with complex characters, a touch of sweetness, and real-life angst that never feels overwhelming.

This book cannot be read as a standalone. Start at the beginning; you’ll be glad you did.