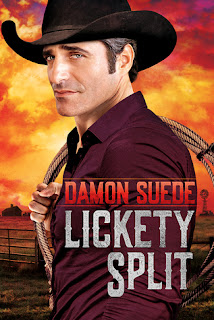 Patch Hastle grew up in a hurry, ditching East Texas for NYC to make his name as a DJ and model without ever looking back. When his parents die unexpectedly, he heads home to unload the family farm ASAP and skedaddle. Except the will left Patch’s worst enemy in charge: his father’s handsome best friend who made his high school years hell.

Tucker Biggs is going nowhere. Twenty years past his rodeo days, he’s put down roots as the caretaker of the Hastle farm. He knows his buddy’s smartass son still hates his guts, but when Patch shows up growed-up, looking like sin in tight denim, Tucker turns his homecoming into a lesson about old dogs and new kinks.

Patch and Tucker fool around, but they can’t fool themselves. Once the farm’s sold, they mean to call it quits and head off to separate sunsets. With the clock ticking, the city slicker and his down-home hick get roped into each other’s life. If they’re gonna last longer than spit on a griddle, they better figure out what matters—fast.

This was at once an utterly fascinating character study of an old cowboy and a young man who lost his heart to that same cowboy long ago, and an utterly frustrating read at times, what with the slow dance around the truth these two men insist upon, but also utterly satisfying in the end, when they both get that what they want, but don't know how to ask for.

I don't have a lot of exposure to Damon Suede's writing. I read Bad Idea many moons ago, so this one didn't pop my Damon Suede cherry, but still - haven't read much by this author at all.

Still, Bad Idea was impressive, and when this here book came along, I snapped it up. Enemies to Lovers trope set in deep down Texas between a young man who ran away from the homophobia long time ago, and his object of desire/tormenter - hells, yeah, sign me up!

This book has to be read slowly, and savored. There's so much between the lines that it's easy to miss a point or five the author is trying to make if you're rushing through it.

On the surface, Patch (the younger man) and Tucker (the older one) are complete opposites.

Patch is going places, he has plans to take his DJing to the next level by opening a club, he's young and full of come, and hook-ups are all he needs. He doesn't want to go back to Texas and has no desire to revisit his past.

Tucker, on the other hand, is nothing more than a washed-up cowboy-cum-caretaker who looks after the farm Patch's parents own, and who lives in a rundown trailer on property. He thinks his time has passed, and that he has nothing to offer anyone, so he's alone and a bit lonely sometimes too. Except for his dog, he's really go no one to talk to day in and day out.

Yep, on the surface, they're as different as night and day. And there's some bad history there too, with Tucker having tormented Patch during his stint playing high school football, when Patch was just a skinny thing and Tucker his coach.

When Patch's parents die in an accident, all he wants to do is get in town to take care of business and get himself back to NYC, pronto. Except, time slows down in Texas, and so do Patch's plans to sell the farm quickly and leave.


This book is truly a character study. It's fascinating to watch the interactions between Patch and Tucker, and both of them changing before your eyes. Yes, there's sexy times too, and even in those, the fundamental differences between the two men are highlighted. Hot, sweaty nights give way to leisurely hours at the pond, with a bit of edging for pleasure added for good measure. Patch learns to slow down, and Tucker learns that sometimes it's okay to say "I love you" instead of expecting the other person to simply know.

They both learn to communicate, in words and deeds, as the story progresses. Mistakes and misunderstandings notwithstanding, both men, young and old, grow in this book. As Patch cleans out the house where he used to live, he takes stock of his life and also learns that you can take the boy outta Texas, but you can't take Texas outta the boy. And that maybe not all is as it seemed back then.

Slowly, carefully, Damon Suede peels back the layers of his characters, showing his readers time and again that he has mastered his craft, creating and exploring two exquisite and completely oppositional characters with depth and heart and determination. There are moments that are utterly breathtaking, and they sneak up on you so unexpectedly that you can't help but sit there with your gaping maw, wondering what just happened.

Read this, savor this. It's masterfully done.