Hi everyone,
Today I’m highlighting the first book in my Naughty Nobles trilogy, Midsummer Night’s Delights.
Midsummer Night’s Delights introduces readers to Julian and Annabelle. They are strangers trapped in an arranged, sexless marriage. To loosen them up, Julian’s father sends them to the Marquis of Demby’s estate to attend a Midsummer Ball. (And this type of ball isn’t for dancing!)


When I wrote Midsummer, I had no idea I would turn the book into a trilogy. Readers and reviewers loved the story and the characters so much, that they wanted these very naughty adventures to continue. So, I wrote two sequels, Midwinter Night’s Delights and Ultimate Night’s Delights. Although the stories are connected, each novella stands alone as an individual read.


After the original release of Midsummer Night’s Delights, readers asked for a prequel. They were curious about how Vincent and Sabrina met and what their history entailed. Although I had no plans to write a full prequel, I gave the readers what they wanted. In Midwinter Night’s Delights, Sabrina tells Annabelle how she met Vincent and how they got involved in their unusual games. 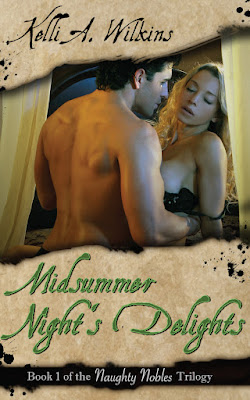 At this Midsummer Ball, couples pair up everywhere—but not for dancing!
Young newlyweds Julian and Annabelle are miserable. Their arranged marriage is lacking everything—especially sex. Julian suffers from a lack of confidence and is harboring a secret urge. Innocent Annabelle’s longings go unnoticed and unfulfilled, no matter what she tries.
But all that changes when they are invited to a Midsummer Ball. Their unconventional hosts, Vincent and Sabrina, introduce them to a world where their most intimate desires and hidden passions are explored—and fulfilled. Swapping and naughty games are just a few of the surprises awaiting them…


Bonus! This e-book includes a sneak peek at the second book in the Naughty Nobles Trilogy:  MIDWINTER NIGHT’S DELIGHTS.


An Excerpt from Midsummer Night’s Delights
Julian followed Vincent down the carpeted corridor, lost in thought. Vincent’s crude words and lewd behavior in the garden had shocked him. Yet, he was intrigued by his claim to be able to “cure” him and awaken his passion. But the idea of attending a ball where everyone would screw, terrified him. What would Annabelle say when she learned of this? How could he ever bring up the subject with her?
“Let’s go in here,” Vincent said, stepping into a room.
“Whose bedroom is this?” he asked as Vincent gestured for him to enter. Like his own bedchamber, the room was elaborately decorated and had an enormous four-poster bed along one wall.
“Shh, keep your voice down.” Vincent removed a painting of a castle from the far wall. He tossed the canvas on the bed and gestured for him to come closer.
He was about to speak when he heard a woman moan.
“Oh, yes… Go deeper,” she said.
His skin prickled. Was a woman having intimate relations in the next room?
Vincent had his face pressed against the wall and was watching from a hole cut into the plaster. Had he no shame? Did he spy on all his guests in their private moments?
He crossed the room, curious, yet offended. “You shouldn’t watch—”
“Shh. Don’t be a prude. Take a look for yourself,” Vincent replied, moving aside so he could look.
He peered through the small hole and saw a brightly-lit bedchamber. A naked, dark-haired woman was kneeling over another figure on the bed. After watching for another minute, he pulled away and frowned at Vincent. “It’s not right to peek in on people. That could be someone’s wife.”
“It is. Mine. That’s Sabrina.”
His heart skipped a beat. “Don’t you care that your wife is in there with another man?”


Vincent shook his head. “She’s not. She’s in there with a woman. Annabelle.”
“What?” He pressed his eye to the peephole again. Sabrina had moved on the bed and now lay on her side, her hand moving between another woman’s parted legs. He scowled. That couldn’t be Annabelle.
Julian readjusted his position to get a better view. He heard a giggle, then saw a flash of light brown hair. A second later, Annabelle leaned forward and kissed Sabrina on the mouth. His mind reeled as he stared at the two women.
His mouth went dry and he turned away from the wall. “Are they…”
“Screwing? Yes. And from the sound of it, they’re enjoying themselves.” Vincent pulled the flask from his pocket and opened it. “You look like you need another drink.”
Julian took the flask and drank down the rest of the liquor. How could his innocent Annabelle be naked? Frolicking with another woman? Dear God, she was his wife and he’d never seen her completely naked himself.
“How… how did this happen?” he croaked out.
“It seems your delicate, repressed wife has learned to release her pent-up desires… with a bit of help, of course.” Vincent grinned as Annabelle whimpered in delight.
“But how? They’re women, and—”
“Take a look,” Vincent said. “You might learn something.”
* * *
I hope you’ll check it out. Reading Midsummer Night’s Delights is a perfect way to heat up a cold winter night! Look for the follow-up books, Midwinter Night’s Delights and Ultimate Night’s Delights coming later in February.
Be sure to follow my blog for the latest updates and visit me on social media.
Happy Reading,
Kelli A. Wilkins


ABOUT THE AUTHOR
Kelli A. Wilkins is an award-winning author who has published more than 100 short stories, 19 romance novels, and 5 non-fiction books. Her romances span many genres and heat levels.
Midsummer Night’s Delights, the first book in the Naughty Nobles trilogy of erotic historical/fantasy romances, was released in February 2017. Loving a Wild Stranger was published in January 2017. This historical/pioneer romance is set in the wilds of the Michigan Territory and blends tender romance with adventure.
Kelli's third Medallion Press romance, Lies, Love & Redemption was released in September 2016. This spicy historical western is set on the Nebraska prairie in 1877.
In 2016 Kelli began re-releasing her romances previously published by Amber Quill Press. Visit her website and blog for a full title list, book summaries, and other information.
Her writing book, You Can Write—Really! A Beginner’s Guide to Writing Fiction is a fun and informative non-fiction guide based on her years of experience as a writer. It’s filled with writing exercises and helpful tips all authors can use.
If you like to be scared, check out Kelli’s horror ebooks: Dead Til Dawn and Kropsy’s Curse.
Kelli posts on her Facebook author page and Twitter. She also writes a weekly blog.
Visit her website to learn more about all of her writings, read book excerpts, reviews, and more. Readers can sign up for her newsletter.

Promotional post. Materials provided by the author.
Posted by Sandra at 4:00 AM