Good morning. I’ve wanted to do another article about diversity in fiction for a while now. My first was about interracial romances and why I love writing them. With so much chatter going about the need for diversity in books, I had to speak on it again.

First let’s start off with a question for authors. Since I’m an author too, I figured I’d begin here. You’re an author and you have an idea for a story which features a character of a race other than your own. Say it’s a black male and you as a white female or male aren’t sure what to write. Do you scrap this idea, even though it could be one of your best books or do you try doing it yourself and using what you’ve seen on TV as your guide? I’ve talked with authors before who’ve said they’d rather not do the “black” character for fear of getting it wrong, but unless you’re doing a historical, say something in the days of slavery or in 1920’s Harlem New York, what could you possibly get wrong?

I say this because I’m a black female who may not fit the mold of the so called black stereotype.  One example, I like rock music and not rap. I don’t talk slang like many might perceive a person of color to do. Yet, I’ve seen books with black characters who fit that description. In many publications, even those written by black authors, black characters are painted a certain way. The way they talk, dress, the neighborhood they’re from. Is it wrong? Not necessarily, but does it hold true for every black male or female? No. What I’m getting at is, when you’re an author you don’t have to draw from those stereotypes unless it fits into the plot. If your story is centered around black males who talk slang and dress a certain way fine. The problem comes in when every book paints black characters that way.

What about you as the reader? If the cover features characters that aren’t like you, are you more apt to shy away from it or does it even matter? I’ve heard rumblings about covers with black characters not selling well. Even worse, publishers haven’t put people of color on the front at all because they fear it won’t be marketable. Why is this? Do we live in a world that is fully white? No we don’t so why should this even be an issue? The book should be judged on its plot and subject matter. If that’s interesting to you then you shouldn’t be deterred to read it because of the characters on the front.

I’m an author and reader who loves reading and writing books about diversity. Some people might take issue with certain books because of the race of characters. That’s not me. If the storyline is interesting I’ll read it whether it be two of the same race or multicultural. We live in a very diverse world so why wouldn’t we want more books that reflect today’s society?

In my opinion, authors should be the leaders in showing what’s outside the box. We should be writing characters whether they’re of different race, sexual orientation, religion, and or gender. Fiction is supposed to be about freedom to express yourself and it shouldn’t be held back because of what people think or say. People in general just want well written books with fleshed out characters not the colors of their skin or what religions they are.

We need more diversity in fiction for so many reasons. Why stifle creativity because of our various differences? I’m sure you’re saying it’s easier said than done but if we all do what we can to embrace diversity around us someone else might just learn from it and pass it on. 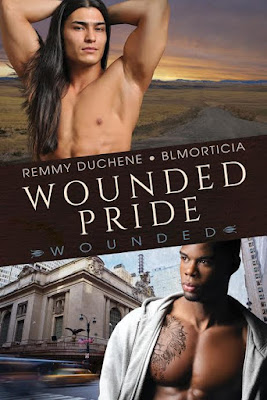 Renford Kline is straight… right? He got over his experimentation in college and moved on. Then how does he explain his blush-inducing fantasies about Brian Daystar? Fantasies he’s having when he should be focused on his career move from attorney to professor. When Brian comes to New York, Renford knows he’s in trouble. Everything about Brian attracts him—from his tight body to his beautiful, dark, hair—but Renford is straight… right?

Brian Daystar needs a break. He’s been working nonstop to turn his Montana ranch into a safe haven for at-risk youth—so much so that he can’t even bring himself to care when he finds out his partner, country star Corey, is cheating on him. Their relationship has been over for a long time, but it might take his feelings for Renford to make Brian accept it.

Both men have decisions to make. Renford must come to terms with who he truly is, and Brian is going to have to decide if he will shun his happiness or embrace it.


After going to the store with Renford, Brian felt a sense of calm. There wasn’t any awkwardness between them, no strange looks or conversations, just two friends going to the supermarket, picking up food. He had to admit the stares from other customers amused him. He wondered if they figured Renford to be his man because how many guys go to the store together, pushing a cart full of food? If they do, they’re lugging around beer or liquor, perhaps some snacks to watch a big game, not grabbing loaves of french bread, red wine, and pasta for a home-cooked Italian meal. Despite that, Brian enjoyed the heck out of it. If Renford was comfortable with doing that sort of thing, so was he.
In the back of his mind, he thought about the comments Renford had made in the car, as well as the grocery store. They were light flirts, almost teasing. Brian liked it and wanted to push for more, but he remembered saying how he’d go at Renford’s pace. That could be detrimental to Brian’s already fragile mind, but what could he do? The last thing he wanted was to push and get Renford all riled up again for no reason.
When they reached Renford’s place, they walked into the kitchen and unloaded the groceries onto his granite countertops. Brian moved around the place like he’d lived there for years. Not that he meant to, but after staying there a little over a week, he’d pretty much had everything memorized.
“Okay, what should I do first? Maybe start cutting the peppers and onions? I’m good at that.”

“We’re going to make the meatballs,” Renford said, pointing to a glass bowl. “Dump the ground beef into that.”
After Brian washed his hands, he followed Renford’s instructions. “I dunno about making perfect meatballs, but I’ll do my best.”
Renford didn’t speak. He set about pulling things from the cupboard and setting them beside the bowl.
He began measuring spices in his palm and dumping them into a smaller bowl before stopping to pour some lemon juice on the meat Brian was handling. “Rinse that first. The lemon juice helps take away that raw smell meat gets after you cook it.”
Brian did. “Anything special you do to these before making the balls?” He let it roll off his tongue. He didn’t mean to, but it was too hard to pass up.
“Um.” Renford was peering at a bottle intently. “Along with the spices, add oats and an egg.”
“Oh. That’s how they do it. Like I said, I only made the man breakfast, not spaghetti. If I did, we had meatballs premade.” He did what Renford asked, adding the ingredients and mixing it together with his hands.
Renford dropped a pinch of cinnamon in before turning to pull down two crystal wine glasses. He then pulled a bottle of wine from the wine fridge and popped the cork. “We’ve never really had a drink together, have we? Aside from the beer—those don’t really count.”
Brian smiled and shook his head. “Then, no, we haven’t. We had ice cream, remember? And I enjoyed that night. We should do that again.”
“Maybe.” Renford poured some wine for Brian, then himself. He set the bottle down before handing one of the glasses to Brian. “Ash brought me this bottle for my last birthday.”
Brian finished washing his hands, then took the glass. “Thanks. Is this wine anything like the Chivas you sent me?” He waited for the answer. Brian would’ve guessed it was since both men didn’t believe in doing anything cheaply. Cyrus clued Brian in on that.


Renford merely smiled and lifted his glass to his lips.

BLMorticia is currently a published writer who entertains her readers with hot and smexy sex, humor, and lots of swear words. She attempts to incorporate metal music or the military in most of her works. Nothin’ sexier than metalheads or military servicemen and women! For more info, please visit, Erotica With Snark.

Love is love, no matter who feels it, writes about it or live it. Born on the beautiful island of Jamaica, Remmy Duchene moved to Canada at a very young age. Though she always wrote, she never took it seriously. An English teacher at her high school read a story she wrote for a project and insisted she consider doing it more. In her free time, Remmy loves photography, Blue Jays Baseball, cooking, spending time roaming Toronto and spending time with family. Over the years, she's taken on speaking out for LGBT rights - something that is quite dear to her heart.