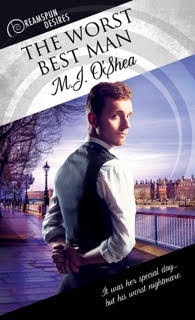 It was her special day... but his worst nightmare.

A rekindled romance wasn’t part of the plan.

Despite his American background, August O’Leary is the most sought-after wedding planner in London. Naturally, Libby and Edward come to him for a wedding the city will never forget. But Edward is an international businessman, so the details are left to Libby and her best friend—who happens to be the love of August’s life and the one who broke his heart eight years ago: Christopher Burke.

How’s August supposed to pull off the event of the year with Christopher distracting him and old feelings crashing the party uninvited?

Christopher has let money and status dictate his life, but no more. His failure to stand up to others’ expectations cost him his future with August—one he hoped would include marriage. Now he has to face August’s hurt and anger and prove he’s still the best man to make August happy.

Hi! This is MJ O’Shea here talking about my newest book The Worst Best Man. One of the main characters in that book is August O’Leary. He’s a bit of a fish out of water — an American living in England — but he’s been there so long that it’s started to feel like home. He has a job at a high end event planning firm and he’s one of the best.  So of course he gets the job to plan the biggest society wedding of the year. When that also brings him into close contact with Christopher, the one man who has ever broken his heart, well, that doesn’t make August very happy.
August is sarcastic and quick with one liners, but he’s also been holding himself back for years from getting too close to anyone, especially romantically. He’s never even told his best friend about Christopher.  In fact, he’s let a lot of his life be defined by that one world-changing relationship. I’ll leave a scene below from early in the book that’s a little introduction to August:) (and also his friends Will, Louise, and Weezy since they’re very much a part of his life). He’s just encountered Christopher again and everything feels like it’s about to implode.

* * * *
August sank into one of Helena’s spindly front room chairs as soon as his new client and her landmine of a best friend walked out the door. It felt like every single part of him was shaking—his hands, his belly, some jiggly part of him deep in his chest. He couldn’t even breathe without it rattling in his lungs. August didn’t know if he’d be able to stand up after that, let alone try to make it home and to Heathrow the next day.
Then he remembered he was supposed to be going to the pub with Will, Weezy, and Louise. He laughed when he realized it sounded like Weezy was some strange combination of Will and Louise, like one of those ship names his two teenaged cousins were always babbling about on Facebook. Definitely losing it. Christopher had finally driven him insane.
He looked up to see Will and Louise watching him gingerly from a safe distance.
“You all right, mate?”

“Hey. I need to get my coat.” August had learned years ago that Will never actually wanted to know when he asked that.
“No, seriously. You look like you’re about to liquefy. Are you doing okay?”
“Not really.” August realized then and there that he seriously didn’t want to get into his long and pathetic past with the Helena Preston staff, even if they were two of his closest friends in the world. He decided to brush the last unreal twenty minutes from his mind. “It’s just been a long day. I might head home and get some sleep.”
“Fuck off, you twat, you’re not going home.”
Sometimes August was surprised that Will could hold it together long enough to talk to their clients without swearing at them.
“Weezy’s saved us a table. It’s quiz night.”
“I’m tired,” August said. He figured he might as well try one more time. He had to admit that the thought of getting wasted out of his head did sort of appeal. Maybe it would make him forget that Christopher goddamn Burke was back in his life, however temporarily.
“Right. We’ll fix that.” Will tossed his coat over. “Coat sorted. Here’s your scarf.” He tossed that at August as well. “Let the Christmas holidays commence.”

A half an hour later, August was squished into a booth between Louise and a boisterously drunk Weezy, who usually smelled like a combination of weed and Bleu de Chanel. He’d found a shockingly respectable job as a record label promoter but somehow still managed to look and act like he’d never quite made it out of secondary school. They were between rounds on trivia, and August had already downed two shots of Fireball in hopes of forgetting Christopher’s hesitant smile.
“What’s up with you tonight?” Weezy asked. He slung an arm around August’s shoulder.
Since they usually had to coerce him into drinking at least his first three drinks before he got into it himself, he understood the confusion.
“I hate everything,” August groaned. The Fireball was burning pleasantly in his belly, but he was far too lucid still.
“Are you going to tell me what happened?” Will asked. “You were your normal pain in the arse self before that last client, and now you look like someone pissed in your cheerios.”
Understatement of the millennium.
“I just…. The Pritt-Shackleton wedding is going to be a pain in my ass, and I wish we could cancel on them.”
“Hey,” Louise said rather loudly. She was always rather loud after a few drinks, and her Scottish brogue got to the point where August couldn’t understand her after about five. “No shop talk. Pub rule.”
“Unless Weez wants to tell us about that time he met Jennifer Lopez,” August said. Anything to distract Will.
“I told you man. NDA. I don’t want to get fired.” Weezy shrugged.
“Why is nobody any fun anymore?” Will said with a sigh. “I’m getting us another round. We need to liven this damn table up. You all are a bunch of pathetic sods.”
“Tell it like it is, William,” Weezy crowed.
“Thanks.”
August cheersed the air with his empty shot glass. He was a pathetic sod, after all. A pathetic sod who was still far too sober to deal with how angry he was. He could still see Christopher’s face that day, the day he’d told August it wasn’t going to work out between them, that they were from two different places and would never be on the same page. Page, place, he’d used every damn cliché there was. Let me guess. It’s not me, it’s you, August had sneered. He’d been angry through his tears. Angry at Christopher for stringing him along if he clearly hadn’t meant all the promises he’d made, angry at himself for thinking he’d managed to find his forever at such a young age, for letting himself get so settled and happy in a life that turned out to be a mirage.
Shit never worked out that way. He should’ve known better.
So yes. August was a bitter, pathetic sod. A bitter, pathetic sod who really needed another shot of whiskey.
“Here you go, mate. Quiz is about to start again,” Will said.
August shrugged and threw back another shot of Fireball. “It’s sports this round. You guys know I don’t know dick about soccer. I’m out.”
Weezy sighed like someone had just insulted his loving mother. “It’s football, you dirty American. When are you going to get it right?”
“Don’t start, Weez. I’m not in the mood.”
August got an inebriated, offended snort in reply.

Thanks for having me stop by!

M.J. O'Shea has been writing romance since algebra class in sixth grade (when most of her stories starred her and Leonardo DiCaprio). When she's not writing, she loves listening to nearly all types of music, painting, reading great authors, and on those elusive sunny days in the Pacific Northwest, she loves driving on the freeway with her windows rolled down and her stereo on high.