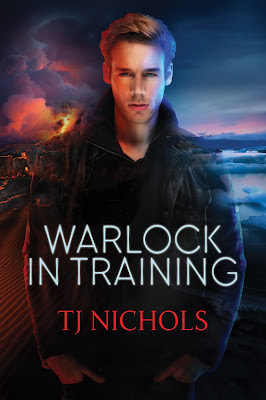 Angus Donohue doesn’t want to be a warlock. He believes draining demons for magic is evil, but it’s a dangerous opinion to have—his father is a powerful and well-connected warlock, and Angus is expected to follow the family tradition.

His only way out is to fail the demon summoning class. Failure means expulsion from the Warlock College. Despite Angus’s best efforts to fumble the summoning, it works. Although not the way anyone expects.
Angus’s demon, Saka, is a powerful mage with his own need for a warlock.

Saka wants to use Angus in a ritual to rebalance the magic that is being stripped from Demonside by warlocks. If Angus survives his demon’s desires and the perils of Demonside, he’ll have to face the Warlock College and their demands.

Angus must choose: obey the College and forget about Demonside or trust Saka and try to fix the damage before it’s too late. Whatever he does, he is in the middle of a war he isn’t qualified to fight.

People always ask how I got published. I don’t know if they are expecting me to admit to using black magic or selling my soul, but it’s really just luck and chance and determination.

I’ve always written. I grew up reading fantasy novels so that’s what I wrote, and most of them were horrible. I still have the one I wrote for a year 8 major project *shudder*. I discovered urban fantasy and gave that a stab (I wrote one and a half books before giving up).

I didn’t stop writing, or reading, I just hadn’t found what I wanted to do. Then I fell over LGBT romance. I knew then that I wanted to urban fantasy but with LGBT characters.

I researched publishers, and I looked for submission calls—they are like gold because the publisher is telling you what they want. I decided on the Dreamspinner Advent Calendar. Now I had a deadline.

While I was plotting out the story I started thinking about how I wanted my name on the cover (this was important, did I want my name, or something else?) I opted for the other name my parents had been planning on giving me, Toby. Then I just decided on initials. TJ Nichols was born. I checked on Amazon and there was no other TJ Nichols, yay! Got my email and blog sorted wrote the novella and submitted.

Then I waited and waited.


I wrote the next thing (another submission call, this time for shapeshifters).

But I was also working on Warlock in Training.

Getting the email that Dreamspinner wanted Elf on the Beach was brilliant.

It was only when Elf on the Beach went up for pre-order that I realized that there was now a T.J. Nichols on Amazon and they wrote something very different to me. There was nothing I could do about that now…and besides my book was up for pre-order!

Since that first sale I’ve been lucky enough to write for another Advent Calendar (The Vampire’s Dinner) and also for the shapeshifter Daily Dose (A Wolf’s Resistance—where I got to combine my love for WW2 history and werewolves).

Warlock in Training was a little trickier. I got a revise and resubmit on that one, the things they wanted changed were things I wasn’t sure about, so I was happy to make the changes. Because it was definitely more urban fantasy than romance (it’s part of a series about Angus and Saka) it is being published by DSP Publications, a branch of Dreamspinner.

It’s been an incredible journey so far. And I’ve grabbed hold of opportunities that came my way. The Order of the Black Knight Series put out a call for people to join the project and I jumped at it. Past lives tangling with the present, a curse to be broken and all wrapped up in a romantic suspense. While not truly an urban fantasy, I love stories with past life echoes so I couldn’t resist. My story, Olivier, will be out around September.

My journey to publication involved a lot of dithering before I finally got my act together and decided I was going to give urban fantasy a red hot go. I think there would be nothing worse than regretting not taking the chance out of fear.

My top three tips for those of you who are thinking about writing for publication (which is different to writing for yourself)
1) Read what you want to write to get a feel for what is out there, but don’t let that be all you read.
2) Take some how to write/plot/self-edit classes or go to the library and read a book or three on it.
3) Read the blogs/web pages of the publishers you’d like to write for and see if they have any submission calls. Get a feel for what they want (and what the market wants).

As always YMMV. If nothing else you will have created the story that you want to read and have maybe learned something along the way, and no learning is ever wasted.

TJ Nichols is an avid runner and martial arts enthusiast who first started writing as child. Many years later while working as a civil designer TJ decided to pick up a pen and start writing again. Having grown up reading thrillers and fantasy novels it’s no surprise that mixing danger and magic comes so easily, writing urban fantasy allows TJ to bring magic to the everyday.

With two cats acting as supervisors TJ has gone from designing roads to building worlds and wouldn’t have it any other way. After traveling all over the world and Australia, TJ now lives in Perth, Western Australia.