Please wish a Happy Release Day to Jo Ramsey and 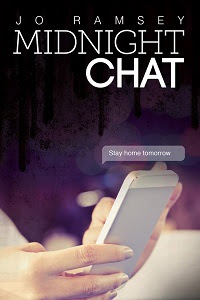 For the past two years, since meeting in ninth grade, Mira MacDonald and Rob Stevens have been inseparable best friends. Rob’s struggles with depression, and his reliance on Mira, sometimes make the friendship difficult for Mira, but she wants to support Rob. Especially since he’s the victim of severe bullying at school due to his sexuality. Even though Rob isn’t out, he is gay, and the suspicion is enough for some people to torment him.

Now Mira has her first girlfriend, Talia Acevedo, and Rob’s jealousy is becoming even more of a problem. Rob insists that Talia doesn’t like him and is trying to break up their friendship. Mira tries to stay neutral, but it isn’t easy when Rob’s obsession with her escalates—along with his anger as the harassment gets worse.

One night, during one of their typical midnight text sessions, Rob tells Mira he’s decided to take drastic action at school to stop the bullying once and for all. And if she tries to stop him or tells anyone else, she’ll be first on his target list.

As an author, one of the more frequent questions I’m asked is, “Where do you get your ideas?”
Once I’ve managed to conquer the temptation to give a sarcastic or facetious response, I don’t always have an answer. The ideas are just there. They jump into my head, and I give them life, at least on the page.
But for my new novel Midnight Chat, releasing today from Harmony Ink Press, I do actually have an answer to the question. It’s a little bit complicated, though, so bear with me…
About two years ago, give or take, I was learning to play bass guitar. I was also composing songs, mostly just the lyrics and melodies, and sometimes the bass line. I was working with someone who was a friend of mine at the time, who was helping me learn bass and helped me flesh out some of my songs.
I was excited about getting back into songwriting, which was something I’d done back in high school but had never really gotten anywhere with, even though my dad had encouraged me to write a letter to the Paul of Peter, Paul, and Mary, who had, if I recall correctly, a recording studio in my home state and a reputation for helping young musicians get started. I did write the letter, and Paul answered inviting me to send him a tape of my songs… but I chickened out and never sent anything. That was back in 1986 or so…
So back to early 2015, when I was driving to my friend’s to work on some music stuff. I was listening to my Spotify playlist, which at the time included the song “I Don’t Like Mondays.” The song, for those who aren’t familiar with it, is about a teenage girl who committed a shooting at an elementary school decades ago. When she was asked why she’d done it, she said, “I don’t like Mondays.” (True story.)
That song, for some reason, sent my brain back a year and a half or so, to the beginning of my younger daughter’s sophomore year of high school. A story hit the local news about a teenage boy who had been expelled from that school, and had told a female friend of his that he was going to destroy the school. Nothing happened; the girl wisely reported what the boy had said, authorities took action, and no one was harmed.
Those two things, a song about a school shooting and a girl who had had to make what must have been a difficult choice to turn in a friend of hers for threatening a school, combined in my brain on the long, rush-hour drive. As soon as I reached my friend’s house, after saying a quick hello, I grabbed a pen and piece of paper and scribbled down the lyrics to a song called “Midnight Chat.”

We worked on that song together, and even recorded it and released it as a single. (Available from: Amazon; iTunes; Google Play; and Spotify.) The more I listened to and worked with the song, the more I thought, “There’s a story here.” So I started working on that story, and it became the novel Midnight Chat, in which Mira MacDonald is faced with a similar dilemma to the girl from my daughter’s school: Assume that her best friend Rob Stevens is just venting when he talks about wanting to kill all of his bullies, or believe he’s serious and turn him in.
By the time the book was complete, my friendship and musical collaboration had ended, but the song lives on, and Harmony Ink accepted the novel. Which brings us to today, release day!

Jo Ramsey is a former teacher who started writing stories at age five and hasn't stopped since. Her first YA novel was published in January 2010. She is the author of several young adult novels on themes such as bullying, abuse, and trauma recovery, and is a firm believer, as her tagline states, that anyone can be a hero. Jo lives in Massachusetts with her two offspring, her husband, and three cats.