Hey everyone I want to thank Sandra for having me on the blog to share the repub of Jerricho’s Freedom. This was first published by Amber Allure in 2015. When they closed, Dreamspinner gave it a home. This is a urban fantasy/demon/MPREG novel. Read my answers to some question about writing, and check out the blurb and enjoy an excerpt from the novel. 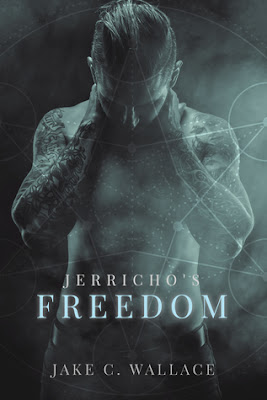 As prince of the Anzuni demon clan, Jerricho’s entire life has been planned for him. At twenty-five, he will become the crown prince of the Anzuni, marry a man chosen by his parents, and bear his husband’s children all without choice. If that wasn’t enough, he must remain a virgin until his wedding night. To do otherwise would spark an unimaginable scandal.

With only ten months until his twenty-fifth birthday, the walls close in on Jerry, and the realization that he will lose his small apartment, his job at the library, and his freedom hits hard. But that’s nothing compared to losing the man he loves. Rex is a smart and sexy construction foreman with a keen interest in demon “mythology.” When Jerry and Rex give in to spending one night together, their indiscretion can’t be kept secret for long. But that’s only the beginning of their problems.

Someone wants to harness the power of Jerry’s bloodline and his ability to conceive—someone with designs on horrifying experiments, sex slavery, and murder. Jerry and Rex are at the mercy of power-hungry sadists. With no one left to trust, they must fight for each other, their freedom—and their unborn child.


Jerry closed his eyes, wanting to wail his frustration. What demon god insisted on testing him over and over again?
“Jerry, you okay?” Rex stepped closer and warmth blossomed in Jerry’s chest. Rex was close. Too close to be casual.
Jerry swallowed hard and peered up into Rex’s face. Shadows fell over his chiseled features and darkened his eyes. Jerry imagined, there in the night, they were lovers sharing an intimate moment. Thoughts like that would only break his heart.
“I need some air. There’s a lot of people in there.” It wasn’t a lie. The bar had filled quickly, and Jerry wasn’t used to crowds, being holed up with his books most of the day.
Rex nodded, then tilted his head to the side. His gaze focused on Jerry’s neck, as visceral as a touch. Rex lightly caressed the sensitive skin of Jerry’s neck with his finger. A shudder raced through Jerry like a shotgun blast. It was so unfair.
“The Raven,” Rex said of one of the tattoo on the side of Jerry’s neck. “The keeper of secrets.”
Rex had mentioned Jerry’s raven tattoo in passing at the library and its symbolism, his reason for getting the tattoo. Jerry had so many secrets in his life, he needed a keeper for the heavy burden.
“Ravens are linked to the void where universal secrets are kept,” Rex whispered. More stroking of the raven. Jerry melted against the wall. No person, no man, had ever touched him so intimately. No one had ever been this close. The solid presence of skin and muscle, and musk carried on body heat comforted Jerry and a gut-wrenching need rose like an uncontrollable wildfire.
Rex leaned down, his lips mere inches from Jerry’s mouth. His darkened eyes searched Jerry’s. Gods, Jerry could fall into those eyes and live happily, forever. “Do you have secrets, Jerry?”

The whispered words fell in soft, heated gusts across Jerry’s lips. His lungs seized, and his brain disconnected from his body, guiding him to lean forward. He connected with the moist, heated lips. Rex’s tongue licked along the seam and pushed inside. For one perfect moment, time ceased to move, and Jerry’s entire world focused on those tender lips.
Right then, he understood what he’d considered to be over-the-top reactions to being kissed in all of those romances he’d read, gay and het. Electric shocks coursed over his nerves, tingling and heightening a mere kiss into a toe-curling experience.
Rex moaned into his mouth, and Jerry’s head spun. He gripped Rex’s biceps hard, and damn, they were perfectly large. Being bold, Jerry pushed his hips toward Rex. In response, Rex rubbed his hard bulge against Jerry’s stomach.
Oh. My. Gods.
Rex’s strong fingers caressed Jerry’s back, squeezed his ass…. He whimpered. Rex broke the kiss, grasping Jerry’s hips and pulling him harder against him. Their raspy breaths filled the silence. Jerry couldn’t help burying his nose into Rex’s neck and deeply inhaling the sweetest, most intoxicating scent.
“Been coming into that library for months, sitting with you, talking, getting to know you, how smart and genuine you are. And watching you on the jobsite,” Rex practically growled. “Your fucking tattoos are driving me crazy, your tight pants, your slim body. All I’ve thought about”—he ran his hot tongue over the raven on Jerry’s neck, and Jerry sucked in a deep breath— “is running my tongue over every one of your tattoos. I’m constantly hard on the jobsite when you’re there. I had to stay away.”
Jerry gasped as that magnificent tongue painted wet trails over his neck and collarbone. He fought for friction against Rex, anything to relieve the pressure building in his cock.
“Want you… too,” Jerry said breathlessly.
Want you but can’t have you.

A quick Q&A with JC...AKA the boring stuff and the writing stuff!

You’re from NY. Tell us about where you grew up.

I was born and raised in a small town in the beautiful Adirondack Mountains of NY. Last year I moved to Vermont to be closer to my work. I spent my summers swimming in Lake Champlain and playing in the mountains. The street I lived on had tons of kids and we all played and grew up together.

Tell us about your family.

What do you do besides working and writing?

I love to read all types of M/M, especially paranormal romance. I’m pretty much M/Ms bitch, lol, and it’s all that I read. On weekends I go out with friends, spend time with family, go hiking or tubing in the warm months. I hibernate in winter. Yes, I live near some of the best mountains in Vermont for skiing and don’t ski. I live a quiet and private life.

How many M/M books have you read?

Over two thousand, at least. Thank god for e-books or I’d need a larger house! P.S. Not really because I only read electronic books. I haven’t bought a fiction paperback in years. Since I am constantly on my computer, tablet and phone writing, reading and doing work, my eyes now have a hard time reading printed books.

What inspired you to start writing?

I always enjoyed writing as a kid and wrote throughout my teens and early twenties. I was highly inspired by Stephen King. I am a huge fan of anything paranormal, horror, or supernatural. After reading Pet Cemetery at fifteen, I decided to write my own story. Not great but it was a start. When college and kids came along, I stopped writing or I would never have done any school work. I came back to it about five years ago and decided to take a shot at getting published.

What can we expect next from you? Any WIPs?
My next novel coming out is a contemporary romance called Happily Ever After Isn’t Easy from Dreamspinner Press. Look for that in the next couple of months.

Jake C. Wallace started writing from a young age, but took a break for marriage, kids, and college (in that order). A few years ago, he rediscovered his passion for writing stories and ventured out into the brave new world of publishing. He has published several novels and short stories.

At night and on the weekends, Jake writes about all things men, believing there is nothing hotter than two men finding and loving one another, whether for a night or forever. An avid reader of M/M romance, Jake loves a good twist of a plot, HEA, HFN, or tragic ending, and has over two thousand books in his library. He also writes what his best friend calls HUNKs (Happy Until the Next Kidnapping). In his daytime hours, Jake works with individuals with autism and behavior issues.

He is owned by a beautiful partner, three kids, and two grandchildren. He lives in the Northern Vermont.