Thank you to My Fiction Nook for hosting me today!

Inheritance can mean a number of things. In this book, it means the kids who are left behind are Cash and Brad’s inheritance when the kids’ parents are in a crash. But we can also use inheritance to mean something you’ve inherited traits or appearance wise from your family.

There’s a few things that I’ve inherited from both sides of my family.

Now I have a lot of things that I’ve earned all on my own. My taste in books and movies is different from my folks for instance. Or the fact that I can be a little obsessive and more than a bit of a pack-rat. So while I’ve inherited a lot from the family, not every trait or quality about me is inherited. 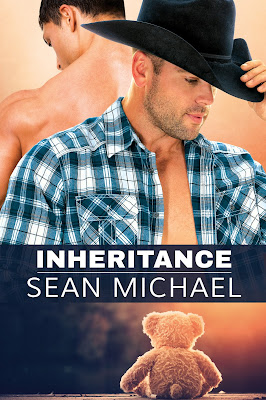 Cash McCord’s life is pretty much perfect. He owns the family ranch, loves his work, and invites the occasional cowboy into his bed. But everything is turned upside down when his brother Jack and Jack’s wife Val are killed in a car crash, leaving behind six kids.

Cash is made guardian of the children, along with Val’s brother, Brad Rafferty—a man who couldn’t be more different from Cash if he tried. A Yankee, Brad is a video-game developer who works twelve-to-fourteen-hour days at his desk. They lock horns as soon as they set eyes on each other. Neither man is happy to have the other around, but neither is willing to give up custody of his nieces and nephews.

It’s up to these two polar opposites to keep the kids together and give them a family again. But first they’ll have to keep from killing each other.


Brad sat back down, the enormity of it hitting him again. Val and Jack were dead, leaving six kids behind.
The cowboy hat dipped as McCord stared into the sink. “What the hell were they thinking?”

Right, like either of them were really thinking about dying. Honestly dying and making orphans of their kids. Brad decided he needed that whiskey pretty damned badly now, and he was done waiting. “Was there anything else?” he asked the lawyer.
“There are papers to be drawn up and signed, and it will likely take several weeks before you have access to any money, but no, there isn’t anything else.”
“Money’s not a problem.” He wasn’t loaded like Jack and Val had been, but he could certainly cover living costs for a while.
It was the being guardian—excuse him, coguardian—to six of the thirteen-and-under set that had him worried.
McCord turned on his heel, headed out into the chilly night, and slammed the door behind him.
“I’ll see myself out, shall I?” Radcliffe said.
Brad nodded at Radcliffe and said, “Thank you,” not even watching the lawyer go as he started looking through cabinets. There had to be booze in here somewhere.


He was going to find it and get drunk off his ass.

Sean Michael on the web: