The Magic of Titles

Hi! My name is Tara Lain and I write the Beautiful Boys Romance and I’m delighted to be at My Fiction Nook! I thought I’d talk a little about book titles today. Have any titles you especially like? People ask me my favorite titles among my own books and I guess I’d answer Wolf in Gucci Loafers and my upcoming new release, Cowboys Don’t Ride Unicorns. Authors have different kinds of relationships with book titles. Some authors love them. Others hate! Some wait until the book is finished to name it. Not me. For me the title is an inherent part of the soul of the book. I almost always have the title before line-one of the book is written and it helps guide me.

This week I’m celebrating the re-release of one of my most popular books, Fire Balls. The title of this book was very important in the creation of the story. Before Fire Balls, I wrote a novella called Volley Balls about some hunky Australian volleyball players. People loved the title and I knew I wanted to write a sequel. The sequel had to have Balls in the title. So what goes with Balls? LOL! Basketballs, footballs, Fire Balls. Yes, it leaped out at me because the hero of the book was a feisty fireball of a guy, but more than that, the title suggested the novella. My other hero had to be a firefighter, of course. From that title grew a whole story of a flamboyant artist who has a passion for a conservative firefighter.

One of my other favorite titles is for a paranormal romance about witches. I started with the idea of a black cat. Around my cat grew a whole story of the most powerful male witch in 10 generations who must save his race by marrying and producing children but, oops, he’s gay. He happens to be a teacher – a college professor. That book is titled, Spell Cat.

My Love in Laguna series is very popular. The first book in the series is called Knight of Ocean Avenue, but it didn’t start that way. I was struggling with the title until one character called the other his knight. Bingo! It takes place on Ocean Avenue and the title was born. That also gave rise to the names of all the other books in the series – Knave of Broken Hearts and Prince of the Playhouse. Lord of a Thousand Steps takes place on Thousand Steps Beach and the hero’s name is Braden Lord – because I wanted that word in my title. My new book coming this august continues the theme with Fool of Main Beach. 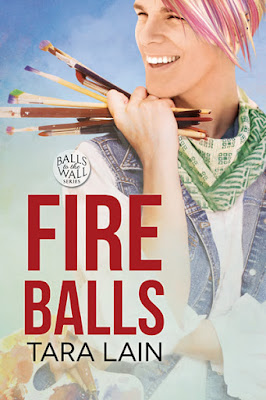 Hunter lives a dream life—his father’s dream. While he’d like to teach literature in college, read poetry in the sun, and find a strong guy to top him, he fights fires for his dad. Hunter hates flamboyant guys like Rodney. So why can’t he resist him? Maybe it’s time to admit this is one flame he has no desire to put out.


The firefighters piled out onto the hard-packed dirt drive and hauled the hose toward the hydrant out by the highway. Shit, they were just going to make it… if they were lucky.
“Save him. Help, please, help,” one woman screamed, pointing toward the building.
What? He gave his spot on the hose to another man and ran to the woman’s side. “Ma’am. What do you mean?”
The woman on the driveway was white as a cloud and pointing, her mouth working. “Rod. Rodney. He ran in. Do something.”
He gripped her arm. “Ran in? Rodney ran in there?” Ice froze his heart.
“Yes, yes. I came over to see, and suddenly he just ran past me and straight in the door. I don’t know where his car is….”
Hell no! He pulled on his respirator and ran toward the door of the studio. His heart beat way too fast. Had to get control. Why, why would Rod do it? What was worth his life? His life. He couldn’t die. Hell, no.
“Fallon, wait. Don’t go in alone,” Cam screamed behind him.
Hell, no. No time to wait. Rod was in there.
The screen door, the damned squeaky screen door, hung half off its hinges. He tore it away and, hunched against the heat, moved into the studio. Smoke. Embers raining down. The heat pushed like a wall through his gear. The flames crawled along the half-missing roof like a snake slinking along a branch, hissing.
Stop. Think. The part of the structure closest to the door remained most intact. He dropped to the floor and scooted along a few feet. Not much in here. Beside him, the old desk had burned nearly to ash. His heart hammered. Breathe slowly. Don’t panic.

Where is he? Can’t be too late. No, hell, no. Never too late. He crawled another couple of feet and pressed his head down by the floor, squinting through the smoke…. Yes!
A body. Rod. Collapsed on the floor clutching a small canvas to his chest. The insane idiot. No painting was worth this. Crouching, Hunter covered the few steps.
Jesus, Rod looked so small. And… so still. Hell, no. Hunter pulled Rod into his arms. Felt right. Felt good. Hunter took off his respirator and fitted it over Rod’s nose and mouth. Breathe for me, baby. Rod’s body hung, limp as a doll.

Tara Lain writes the Beautiful Boys of Romance in LGBT erotic romance novels that star her unique, charismatic heroes. Her first novel was published in January of 2011 and she’s now somewhere around book 35. Her best-selling novels have garnered awards for Best Series, Best Contemporary Romance, Best Paranormal Romance, Best Ménage, Best LGBT Romance, Best Gay Characters, and Tara has been named Best Writer of the Year in the LRC Awards. In her other job, Tara owns an advertising and public relations firm. She often does workshops on both author promotion and writing craft. She lives with her soul-mate husband and her soul-mate dog near the sea in California where she sets a lot of her books. Passionate about diversity, justice, and new experiences, Tara says on her tombstone it will say “Yes”! 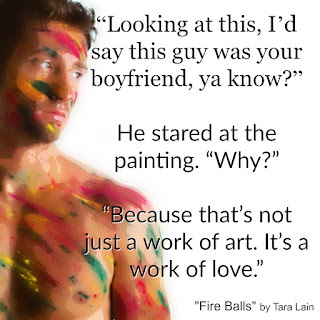